A panel of popular YouTubers and media representatives concluded the morning session on the second day of Festival of Media LatAm 2015, with a discussion about their importance to brands. 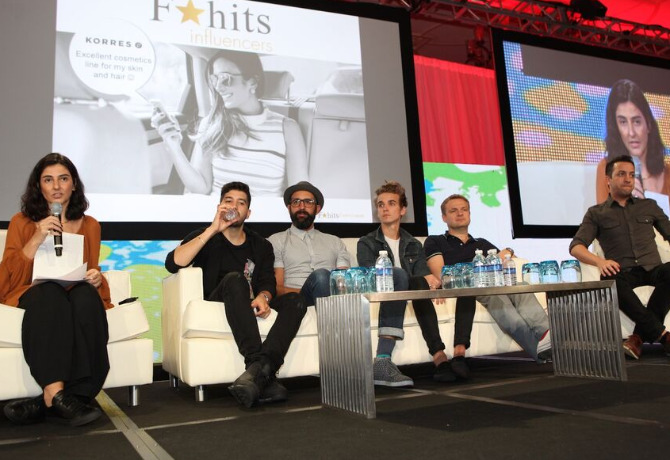 The host, John Farrell from YouTube, introduced the panel with some fascinating statistics – currently, eight out of 10 of the top teen celebrities are YouTube stars. “These are the teen celebrities of today,” he said.

After years where LatAm is constantly lagging with technology adoption, it was revealed that with online video it is at the forefront.

“It’s not just about some of these top large stars,” he said, “Across all markets, we have hundreds of influencers, connecting with millions of fans in an authentic and genuine way.”

Dominic Smales started Gleam Futures six years ago and now he has a roster of 27 stars, who he expects to get 3.5 billion views just this year. He explained that, although in the last 18 months the influencers had been confined to social media platforms, multi platforms were now being developed because of the size of the global audience.

Jayson Fittipaldi from Nobox said that a lot of brands had struggled with the challenges of using influencers well. “I’m really interested to see all the discussions on the power of working with influencers,” he said.

He went to say that for him, the most important thing he’d learnt was not to work with influencers, but to ‘co-create’.

YouTubers on the panel included Joe Sugg, who runs three separate channels, and Bully, who has a main channel about travel and a second about his life, and now works as a social media strategist with Nobox.

Political comedian Chumel Torres described his channel as featuring “lot of cursing going on so don’t watch it unless you have a sailor mouth like me”, and joked that the secret to success as “being handsome”.

Alice Ferraz from F*hits expressed the need to be connected to each other, especially in emotional LatAm. “People love people and we love to create the right connections to put people together,” she said.

Bully said influencers must be passionate. When he started, he said it was just his mum watching. After some time he developed a larger audience, so started to experiment with what he would like to see. “Hey I have this idea of a video I haven’t seen before, I will do it!” he said.

The importance of consistency

Sugg said it was important to be consistent and upload on a regular basis, and pay attention to the comment section, learning from them what content they want to see.

Bully added that he only works with brands that he would normally use: “I’m the first one that buys my advertisement, I would be the first one to say ‘hey that was so cool’. I wouldn’t relate with a brand that I don’t know – I say I have brand friends.”

Torres discussed his latest campaign with a telephone company in Mexico, where he appealed to provide schools with computers and projectors based on an email competition for teachers.

No cares about a brand when watching influencers, Smales said, they care about what the influencers have to say.

“All of the really terrible brand engagements have said ‘here’s a script’,” he added. “It’s got to start with the creatives, it’s up to them to work out how they would present the brand to the audience.”

Fittipaldi said that brands should look around and see what influencers are interesting and had related to the brand in the past, so that when they do create something, it feels authentic. “There are amazing co-creation opportunities if you know brand really well and really creative,” he said.

Bully said that he considers himself a 360 degree business and brand, and tied this across social platforms. “All social platforms can be used in different ways and you have to make a study on how you are going to communicate, it has to be an identity on different social media platforms,” he said.

Torres thought of YouTube as the core business. “Social media can do a lot for your brand in a more intimate way because the main show is YouTube,” he said, adding, “but the backstage is people interacting with you on Facebook on Twitter, but not Google Plus!”

Sugg said he used social media more frequently than YouTube, sending up to thirty tweets a day to his global audience. “If I wake up at 2am, I think ‘Australians are awake, let’s send a tweet to them’,” he said.

He also felt it was important to run your own social media streams. “Your audience see you more as a real person if you are tweeting what you are having for breakfast and general mundane stuff,” he added.

Be part of their lives

Suggs expressed the importance of allowing the creator more creative control. “You know the audience better than anyone else,” he added. Smales also encouraged brands to listen to the talent.

Fittipaldi said that authentic moments of random interaction were the key. “Everyone who interacts feels involved,” he commented. “We’re at a really good place right now where there is the opportunity to target anyone at any time and, if you have great content, you’re going to win.”

“What these guys give you can’t put a rate card,” concluded Smales.