Advertisers still require a greater understanding of programmatic and data at the highest level, according to AXA’s global digital and brand director Simon Lloyd. 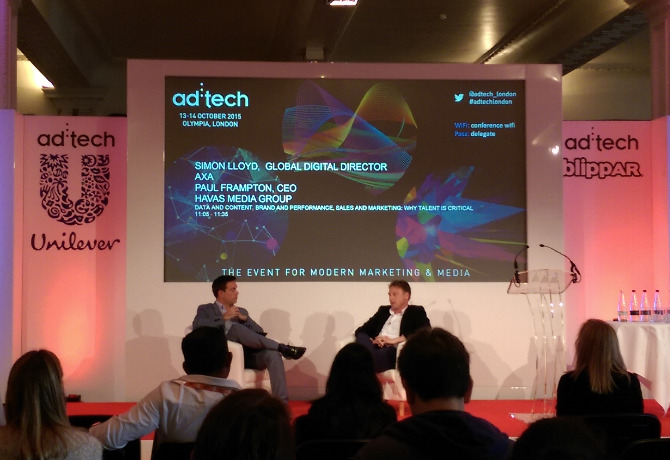 Speaking to Havas Media UK CEO Paul Frampton at today’s (14 October) Ad:Tech London event, Lloyd also argued that ownership of the digital customer journey is very much “up for grabs” between technology and marketing teams.

Lloyd told delegates: “I don’t think people understand [programmatic] at a particularly senior level. There is so much jargon in the industry that some people get confused about what programmatic is. But marketers need to understand the changing marketing mix, and not just go back to what they know, like a 30-second TV ad.

“But that is where you get that conflict – who is looking after the digital journey? It is still all up for play who owns the customer relationship,” he added, while Frampton noted that an unnamed senior client suffers from rules prohibiting internal departments from collaborating.

Lloyd, a former marketing director at Virgin Atlantic, was challenged over the validity of his job title, and whether ‘digital’ titles were required nowadays, given the ubiquity of digital media.

He responded by arguing that it “depends on the organisation”. In the case of “progressive” brands, especially start-ups, Lloyd conceded there may be no need for digital specialists. However, “there is value” for major advertisers like AXA still looking to “identify” the role of digital for the business, he added.

When asked to offer advice for agency groups, Lloyd observed that they often struggle with similar issues to their clients: “Big agency groups do have the depth and breadth of specialism, but I think you struggle with some of the same issues we do – getting the most cost-efficient way to get ahead of the competition.”