The ‘BRIC’ markets of Brazil, Russia, India and China continue to drive global growth, despite concerns about three of those markets.

Russia remains at risk of another step down in oil prices, while Brazil’s slump will not even be saved by next year’s Olympic Games in Rio, according to GroupM figures. However, it is more bullish about the prospects for India, which it predicts will be the fastest-growing economy in 2016.

The Eurozone now only accounts for 11% of global advertising, with zero ad growth in 2016 forecast in France, and small declines expected in Germany and Italy.

The group claims 2015 will be the first year that absolute spend on traditional media will have declined in the ‘new world’, namely Latin America, South-East Asia and Central and Eastern Europe.

Despite this, traditional TV as a medium continues to “stand up well”, only losing a single point per year since its high-point in 2012, when it accounted for nearly 44% of global ad investment.

Print media occupies an 18% share of advertising investment, with its decline having slowed, though GroupM considers it “too soon” to describe it as a stabilisation.

Speaking to M&M Global, GroupM global president Dominic Proctor said the report offers “mixed news” for brands, agencies and media owners: “Brand should be careful, and be adaptive; have the wherewithal to take advantage of short-term opportunities.

“One of the challenges for media owners, agencies and advertisers alike is all of the measurement issues around this rapidly changing scene. Measuring the snakes and measuring the ladders is as challenging as spotting them in the first place.” 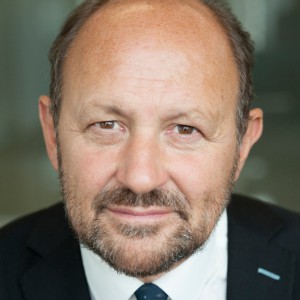 Proctor (right) is buoyed by the economic picture in India, and argues the growth in China is still a plus point for the global marketing and media industries.

“The Indian story is terrific and strong; that is a force for positive movement. In Russia and Brazil, as much as anything they are caught in political headwinds, for very different reasons, but both will recovery. But the world is rather more uncertain than it was,” he said.

“With China, to a certain extent it is about the management of expectations. The management of the economy is much more regulated and, therefore, it is more scrutinised. But, generally speaking, for such a massive market to still be in strong growth is no bad thing.”

And, as Facebook and Google continue to dominate digital media markets, Proctor argued both companies are well-placed to maintain a stronghold on their channels: “They are truly dominant in their sector and, as long as they work hard to prove the effectiveness of the medium and help clear up issues around transparency, viewability and fraud, then there is no reason why they can’t continue to grow.

“The threat is the threat of the unknown; that someone else will break from the pack at some point. That’s what makes the whole puzzle so intriguing. But it is going to be some achievement to break through to the level those two companies have achieved.”