On the morning of Monday 20 June, Samsung Electronics America chief marketing officer Marc Mathieu took the Lumière Theatre stage at Cannes Lions for an immersive session on how VR and 360 will reimagine the ways we express creativity, engage culture and experience compassion. 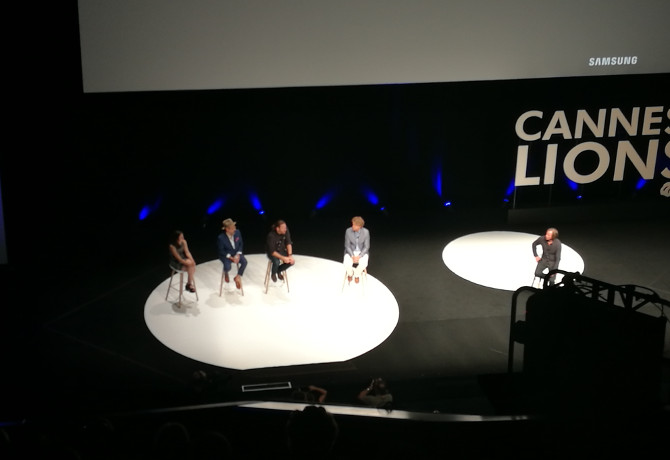 Throughout the showcase, Mathieu called guest speakers to discuss and demonstrate the power and potential of the emerging media in shaping storytelling.

“I really believe we are lucky because very rarely in a lifetime do you witness the creation of a new medium,” said Mathieu, discussing the advent of cinema, when audience members dived out of harm’s way watching the image of a steam train approach the screen.

However, he continued that he believes storytelling has regressed since the cavemen, who used 360 degrees of a cave’s wall to capture a moment, with storytelling now limited by the introduction of a frame to pictures and movies.

“Video is a completely experiential medium, you can be in your own body but also be somewhere else,” Mathieu added. “We’re at one of those incredible artistic junctures.”

Within founder and chief executive officer Chris Milk and his “Flavor Flav” Vice chief creative officer Eddy Moretti  discussed the progression from thinking away from a screen.

Moretti talked about VR and 360 in terms of increasing empathy in storytelling, not titillation, excitement or adrenaline rush, and the first news broadcast in virtual reality.

“We’re platform agnostic, we want to tell stories and explore the human experience,” Moretti added. “VR is just a natural extension, if we get to holograms projected in smoke one day, maybe that’ll be the next thing.”

Milk explained the importance of putting people inside the frame that they have been looking at for so long.

“I’m tired of the rectangle,” he added. “I realised I didn’t want to put people inside a frame, I wanted to put them on the other side of the frame.

“We don’t have a language for storytelling, we’re writing that language every day. We need to discover what it means to tell stories, not through a rectangle, but through human experience.”

Moretti spoke of how Milk sees tech as an emotional experience – visceral, engaging and deeply moving.

Facebook Creative Shop global creative director Andrew Keller then presented Dreams of Dali, a 360 experience allowing the audience to go inside and beyond one of Dali’s paintings.

“You probably know Dali was a painter and sculptor, but he also did some work with holograms later in life,” said Keller, speculating that the artist would have been doing work with VR, if he was alive today.

A second video screen presentation was made by Oculus Story Studio creative producer and head of education Yelena Rachitsky, focusing on video footage from around the world.

“When you are watching lovers fall in love, you release love pheromones, like you’re falling in love yourself,” she added. “With VR, that catharsis is not happening vicariously – it’s really happening to you.”

“The deeper the feeling of immersion the audience had, the deeper the emotional connection they seemed to have,” said Milk, referring to an early VR prototype film shot over three years ago, featuring musician Beck. “I realised ‘this is really something!’”

Moretti felt that, although frames and screens had been very useful to the evolution of Vice, “the power of going beyond the frame is addictive and magical”.

“For us, as a documentary film company, the opportunity to tell documentaries with live action is giddy and exciting, then to imagine what our business will look like in a few years outside of the frame, also bringing our commercial relationships into that – it’s here, it’s powerful and we have to engage with it.”

Keller felt that brands are struggling with working out how to use VR and 360, but he advised them to be bold, stating that it’s a huge opportunity for brands to explore.

Looking to the future, Mathieu is starting to think about the new media as beyond even storytelling platforms, but as operating systems.

“How does Facebook look in virtual reality – it will not just reinvent creativity, but communication, commerce and compassion. We want to be catalyst to accelerate VR consumption, we want to have more of a conversation around the opportunities and challenges it offers.”