Content, data or tech – which is most important for advertisers? | M&M Global
Europe News
20th April 2016 by Anna Dobbie

In a deliberately contentious debate, representatives of major media companies pitted themselves against one another to determine which is most important to modern advertisers – content, data or technology. 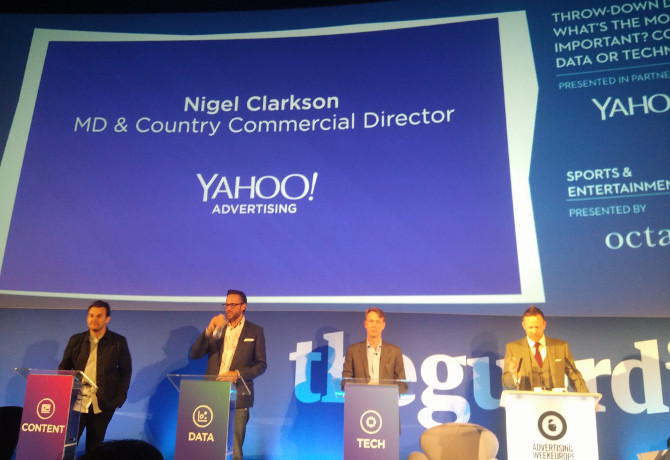 The debate, hosted by Yahoo UK managing director and commercial director Nigel Clarkson on the third day of Advertising Week Europe at Shaftsbury Avenue’s Picturehouse in London, saw three industry figures fight to defend their specialism in a winner-takes-all show down.

In his last day as CEO of MediaCom Beyond Advertising, before leaving to join creative agency Stink, James Morris opened with a video illustrating how interesting and engaging content can be compared to the blank screens of data and tech.

“The way people talk about content in our industry is so banal and boring,” Morris said. “There’s a debate raging in the industry about the fight between art and science.

“What’s really important is that art doesn’t get taken over by science,” he added, stressing the importance of investing more in content.

“To quote Robert De Niro, ‘There are three ways of doing things around here: the right way, the wrong way, and the way that *I* do it’. Content is the right way.”

Xaxis EMEA chief executive Caspar Schlickum showed a picture of a fax machine before discussing how technology had evolved to give rise to programmatic.

Using graphs to reinforce his stance, he went on to prove that “data is even more important than Justin Bieber”.

Jay Stevens, who is also leaving his role as international general manager of Rubicon Project, centred his argument on the fast that without an ad server, you can’t flight an ad campaign,

“Campaigns can be run without prior audience insight, the reality is you don’t have to have the data to run the campaign,” Stevens said. “In conclusion – all are important but technology is the critical foundation.”

Schlickum felt that data differentiates advertisers from other brands: “Don’t worry about which DSP you’re using, what matters is executing it effectively and efficiently and the data input. It’s all about data.”

However, Morris stated that there is only one way to engage an audience – by creating a compelling ad to engage them with the product.

Morris said there was a danger of data and tech leading the content story. “The divorce between content and media has created some of the problems, what is important is getting back to basics of great creative and distribution,” he said. “It’s important they work hand in hand.”

Looking at ad blocking, Schlickum felt it was the “kick up the bum the industry needs” to become more responsible. “If we’ve created this ecosystem just to be slightly less annoying advertisers, that’s pretty depressing, isn’t it?” he said. “We need to use it to become better marketers.”

Morris argued that people are blocking ads because they don’t like them or they are not relevant, and that a return was needed to the culture of creating content that people want to seek out and watch, while Stevens discussed the “arms race” of trying to make home pages more intrusive and engaging.

Schlickum talked about the funnel to conversion and the data points created in the process, but Stevens said the industry should be “using technology to communicate through the entire consumer journey” and “manage the overall life cycle of clients”.

Although Twitter votes showed a skew in favour of content, the audience on the morning voted for Schlickum’s data argument with a margin of around 10%. However, Schlickum concluded that “everything is important”.

“None of this stuff is independent, so I think it’s a draw.”