Since 1911, International Women’s Day has been celebrated the world over to recognise the social, economic, cultural and political achievements of women – while also marking a call to action for accelerating gender balance. But in the words of Gloria Steinem, world-renowned feminist, journalist and activist: “The story of women’s struggle for equality belongs to no single feminist nor to any one organisation but to the collective efforts of all who care about human rights.” Collective action and shared responsibility for driving a gender-balanced world is key.

As we’ve explored in earlier Festival Intelligence features both globally and in Latin America, there is no shortage of brands leading the charge and taking a stand by using their power and influence to give women a voice and provide platforms to help drive social change. To celebrate International Women’s Day 2019, we’re heading to the other side of the world to see how brands in the Asia-Pacific region are tackling gender inequality issues.

On the Festival of Media Asia-Pacific Awards 2019 shortlist, there are some great examples of female empowerment campaigns, driven primarily by the FMCG (haircare, skincare and cosmetics) and not-for-profit brand sectors. From Australia to Indonesia, the Philippines to China, and Thailand to India, the most populated categories for these campaigns are Best Integrated Campaign, Best Use of Gamification and Impact Awards – showing the spread of how different forms of media are creating the platforms from which brands can tell their stories.

From social acceptance for the transgender community in Thailand to an anthem empowering women to accept that they shouldn’t have to choose between their societal expectations and their personal ambitions; there were a number of recurring themes from these entries.

First and foremost was authenticity. Real people, untold stories and relatable content formed the basis of all these campaigns, focused on empowering and driving change. From traditional TV, radio, print, OOH to drive awareness, to modern mediums like digital video, social media and music to boost engagement, a message is only powerful with the right platform to tell it.

Select media partners were chosen to help create and amplify the content, adding to the authenticity theme and key influencers brought on board to provide an authentic voice that women can relate to. In terms of engagement, gamification techniques and challenges were used in some cases to add a new, interactive dimension to the message.

A quote from an article penned by Anne Rayner, Regional Chief Solutions Officer and CEO Myanmar and Cambodia at Kantar, sums up the opportunity for brands: “As marketers, we have a powerful platform to change the role models and messages society sees about gender. It’s our responsibility to use it to offer a better version of masculinity as well as femininity. For the sake of our boys as well as our girls, we must hope the future is female.”

The more that brands and marketers can step up and use their power and influence to bravely shine a light on gender issues, the closer we will be to achieving balance for better.

In recognition of International Women’s Day, we put the spotlight on four Festival of Media Asia-Pacific 2019 shortlisted entries, which celebrate female empowerment, gender equality and highlight how brands are becoming a driving force for good: 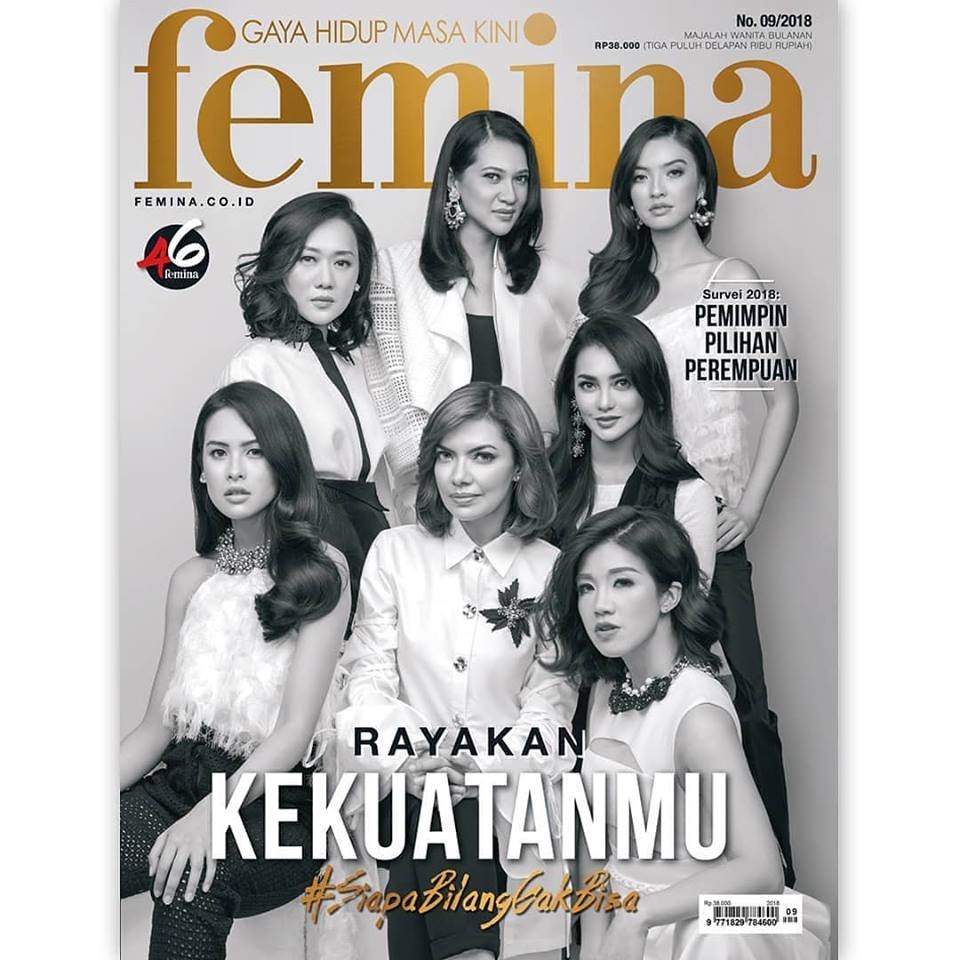 Shortlisted for: Best Local Execution of a Global Brand

Historically women lived in a world where strength and beauty are placed on opposing ends. Iconography and society referred women to be the sole champions of everything that connoted beauty and being strong physically and emotionally was the mark of a man. However, the meaning of strength has changed from being a unidimensional definition to something that is fluid. Women in Indonesia are always practicing the art of walking a tightrope. For them, achieving personal ambitions takes more than will power. It demands mastery in balancing familial expectations and personal goals. While doing this, women are often faced with judgements that contest their intent and ability, seeding in self-doubt, forcing them to choose one role over another. Having to make these choices prevent women from rising up the corporate ladder and holding leadership positions.

As a brand that encourages women to find their strength, Pantene wanted to encourage women to use their strength to make the choice to NOT make a choice between their societal expectations and their personal ambitions. And to do that it needed to cut through all the questions that raise self-doubt, judgement and insecurity when it comes to taking on more than one role. So, the campaign idea was articulated with one question that mattered more than all the others she faced every day; “Siapa Bilang Gak Bisa” or “Who says we can’t?”.

Staying true to the campaign message, it deliberately chose women who in real life actually play dual roles with ease and confidence; existing brand ambassadors and KOLs, wherein they served as an inspiration to Indonesian women to also share their own stories. Who better to deliver the message of than Pantene’s own brand ambassador, Anggun, the face of Indonesia to the world. The brand collaborated with her to create a song that encapsulates the message of not having to make choices. She dug deep into her own story of being an icon on the world stage and being the best mother. The agency orchestrated a plan that would turn a simple question into a nationwide conversation. First, it seeded the all-important question of “Who says we can’t” with KOL’s and Pantene brand ambassadors asking their followers about what stops them from achieving their dreams. 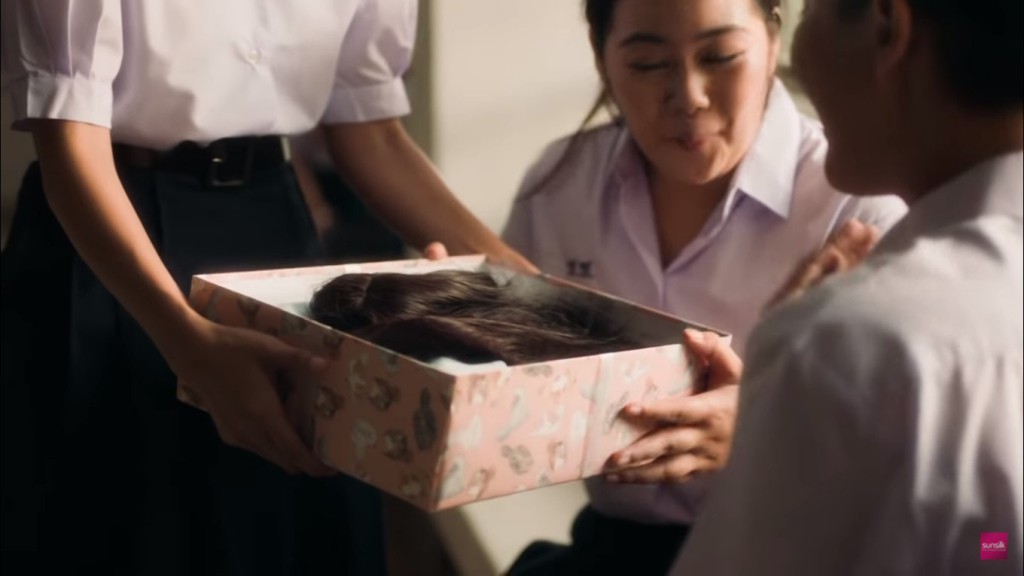 Sunsilk: Hair by your side – to her/wannabe her (Transgender) | Sunsilk (Unilever) | Mindshare | Thailand

“Fempowerment” is trending worldwide including Thailand. From insurance to FMCG, that specialise in the art of “cryvertising,” have tried to reach out to consumers concerning women empowerment. Sunsilk wanted to talk about every girl having the right to express herself through her hair to reach any possibility of life. The most important values that Thai culture hold to are respect, self-control and non-confrontational attitude. By contrast, Thailand is popular worldwide for its LGBT community. The transgender women are very visible and are an integral part of “girl gang”. The country has hosted Asia’s first transgender beauty pageant every year called “Miss Tiffany Universe” for over 35 years now; and offers world class sex surgery. These factors make one believe that Thai people are quite open about sexuality and respect gender preference. But the truth is not as glossy as it looks.

Sunsilk “Girl power” campaign was launched to raise awareness of such inequality, improve social acceptance of every girl in the country including transgender women. The campaign was launched within “the Miss Tiffany” winner named “Rock”. The story behind Rock was about a transgender girl, her life in a cocoon, with a withdrawn feeling when she first discovers her sexuality, filled with fear of being disowned by parents if she reveals it, all these only until she succeeds in what she was always great at which later helps her regain the respect and pride from her parents.

The brand partnered with Google to strategically launch it among the trans community to first evoke emotional response and win credibility allowing them to voluntarily share the content without any fear of losing. Sunsilk continued to drive social impact by partnering “Diva Show” which was a unique programme to celebrate women including trans talents by featuring shows of trans, their unique talents and competence that they do for the community and their unfulfilled cravings for acceptance. It was intended for society to believe that these unique individuals are more talented than what you can see from their appearance. The revealed untold stories inspire society to change perception towards the trans. Every social media participated this movement forcing one to think “Do we allow our near and dear ones to choose their sexuality?” and “#DIVASHOW”. Also, to let the trans women know of the world of opportunities and possibilities when they have Sunsilk hair by their side. 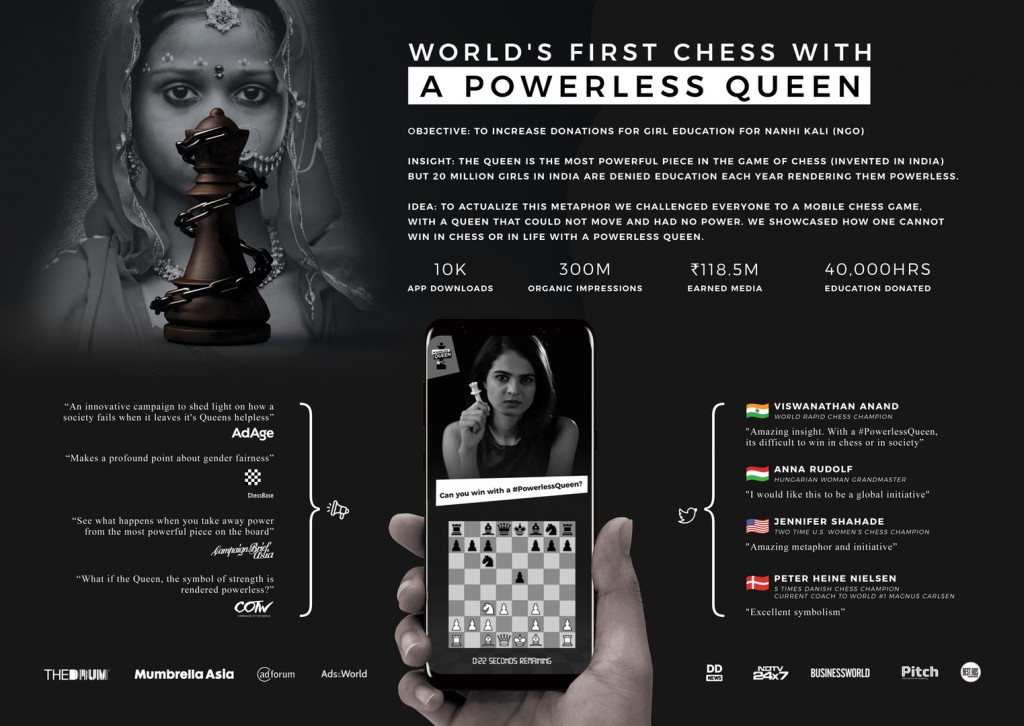 Shortlisted for: Best Use of Gamification

Nanhi Kali is a non-for-profit organisation with the aim of providing primary education to underprivileged girls in India. Its core objective was to create awareness about how educated women help society and was also drive donations towards the education of underprivileged girls. Chess was invented in India in the 6th Century with Queen being the most powerful piece on the board. However today in the 21st century, the real queens i.e. a vast majority of Indian women are not even powerful enough to get access to basic rights of education.

It wanted to break this misogyny and highlight how important it is to educate the women in society. To ensure it reached the right audience, the organisation brought in India’s #2 Chess Player, Woman Grandmaster ‘Tania Sachdev’ who challenged people and fellow chess players to take the Powerless Queen Challenge. Once they played the challenge and lost, they were prompted by a call to action to donate to Nanhi Kali and led to their website.

It created the World’s first digital Chess game with a ‘Powerless Queen’. In this version of Chess one player had to play with a Powerless Queen, i.e. a queen who couldn’t move while the other player has a powerful queen. Queen being the most powerful piece on the chessboard, #PowerlessQueen was a metaphor for how real-life queens i.e. women in India are treated and rendered powerless. This was rolled out as a #PowerlessQueen challenge across India challenging people to try and win. As people lost, it prompted them share the message and to donate to the cause so that they can empower a girl child with education. 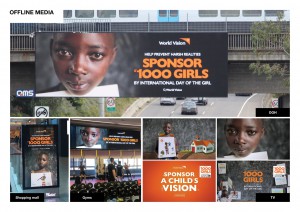 World Vision has seen a downward trend in new acquired Child Sponsorships for more than six years. The challenge was to get 1000 girls sponsored in an eight week period over Aug-Oct 2018. This is traditionally a quiet period that sits between the heightened giving periods of end of financial year – donations driven by tax incentives – and Christmas – where family and community mindedness drive the majority of the category’s annual giving. Its campaign idea ‘1000 Girls’ came from recognition that girls in developing countries often suffer harsh realities including being forced into child labour and marriage while they’re still children. Child sponsorship helps address this by providing education to both sponsor child and their community – helping them to break the cycle.

To activate its audience of Woman 35-54, the campaign focused on the harsh realities facing young girls, leveraging heightened awareness around women’s rights from movements such as #metoo. The strategy leveraged four elements to drive success: Urgency, Transparency, Authenticity and Impact. TV & OOH drove reach amongst the 35-54 year old female audience .

In tandem with awareness, it needed to deepen understanding and initiate active consideration. Here content provided reasons to care and addressed barriers to action. Partnerships with print and digital media enabled the media themselves to create a combination of video stories, long-form articles and testimonials from their own editorial staff about their experiences with World Vision. By leveraging publishers’ authentic voice it was able to educate about the issues and address barriers to donating in a form and tone aligned to their audience needs.