Latin America is a region full of diversity, culture, traditions and celebrations, making it one of the most dynamic marketplaces for advertisers. But while TV reigns supreme as the media of choice, a greater understanding and use of digital technology has paved the way for a new media landscape ready to be explored.

According to MAGNA’s summer 2019 ad spend forecast, the Latin American advertising market will grow +7.3% this year – with both Argentina (+22%) and Brazil (+9%) listed amongst the fastest growing markets around the world. Statista forecasts ad spend to reach $28.36bn, while eMarketer predicts that digital ad spend in the region will grow 14.1% to $9.17bn, with digital platforms claiming nearly one-third of all media spending.

With the Festival of Media LatAm Awards 2019 shortlist having recently been announced, it’s clear that marketing innovation across the region is continuing to thrive. Of the 138 shortlisted entries, Mexico accounts for almost a quarter (24%), followed closely by Brazil (22%) and Argentina (19%). Campaigns from Colombia, Dominican Republic, El Salvador, Peru, Puerto Rico, Chile, Ecuador, Uruguay and the US also feature on the shortlist.

Keeping with tradition, Food & Beverage brands have dominated once again across the board, with a strong showing from the FMCG, automotive, travel, finance and entertainment sectors. On the agency front, Initiative (14%) and MediaCom (12%) lead the Festival of Media LatAm Awards shortlist in terms of nominations, and it’s encouraging to see a number of new independent entrants featured this year.

For this week’s Festival Intelligence, we’ve taken a deeper dive into some of the campaign entries shortlisted across multiple categories to get a flavour of the latest trends driving the marketing landscape in LatAm.

In keeping with the diverse nature of the region, annual cultural events and traditions continue to form a large part of the basis of campaigns but what’s interesting is how new media techniques are being woven into the communications plan to bring the storytelling into the modern age.

At the same time, brands across the region are also working hard to eradicate stereotypes and tackle a range of social issues and cultural taboos with powerful and impactful movements to change the conversation and drive significant change in how certain subjects are approached.

From a media viewpoint, the shortlist throws up examples where TV has been used as the main media to create a live-action impact to capture the attention of vast audiences; newspapers and print to make bold statements that led to online conversations happening across social media; while in others mobile was the medium of choice to reach younger consumers and to create immersive digital experiences, in some cases using Augmented Reality (AR).

So while TV might remain an important channel in LatAm in terms of reach, attention and impact, there is also power in an integrated approach that blends offline and online media to boost the impact of the communications, without forgetting that timing (in terms of events and traditional rituals) has a big role to play too.

We put the spotlight on three Festival of Media LatAm Awards 2019 campaigns to have been shortlisted in four or more categories, which highlight this trend: 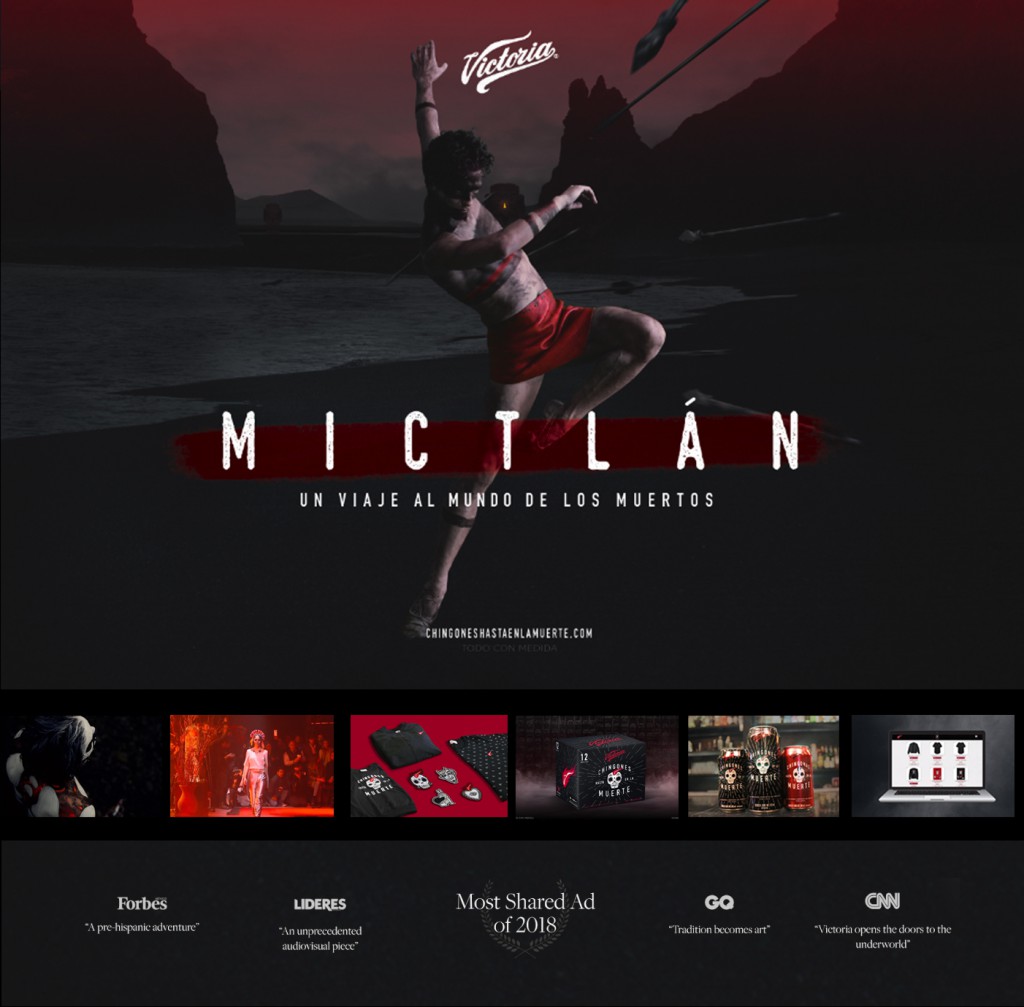 Although the Day of the Dead is an extremely important holiday in Mexico, occurring every November, no alcoholic beverage had previously made an effort to own it. Until 2014 when Cerveza Victoria, Mexico’s oldest beer brand, which has long championed the country’s history and heritage, began to celebrate and make young people feel proud of this unique holiday. The challenge was to maintain share of voice, brand preference and continue to champion Mexico´s traditions among young, legal drinking age audiences. The insight was that each generation risks forgetting the origins of our traditions. Lots of young people know about the Day of the Dead but they don´t actually know its origin.

The message needed to give Mexicans a unique opportunity to discover their roots and heritage. Cerveza Victoria would create a story that highlighted the often-forgotten traditional rituals and beliefs surrounding Day of the Dead. The agency know young people love to experience culture, not just witness it, so to bring this strategy to life it would develop a journey through nine levels of the Aztec underworld: Mictlán. In Aztec culture, people went to Mictlán after death where all must pass through the nine different levels of Mictlán, if they wish to reach their final resting place.

To appeal to its audience of young legal age drinkers, it would also impregnate the communication with the spirit of youth by keeping the campaign mobile where 95% of the target audience are. The result – Chingones hasta en la Muerte, which roughly translates to ‘We are f*cking awesome, even in death’ – an invitation to share a journey to the roots of the Day of the Dead, to Mictlán. Then to make a powerful connection system, the agency was inspired by different studies of Mexico Universities which showed that Mexican young people are looking for more involvement in cultural activities and expressions; being really connected with film, arts and music – they specially love collaboration. The brand created an experience encompassing a whole range of new worlds, including a film, a clothing collection, an immersive digital experience, a soundtrack in partnership with a famous Mexican band, AR-enabled packaging and e-commerce sales via Amazon. 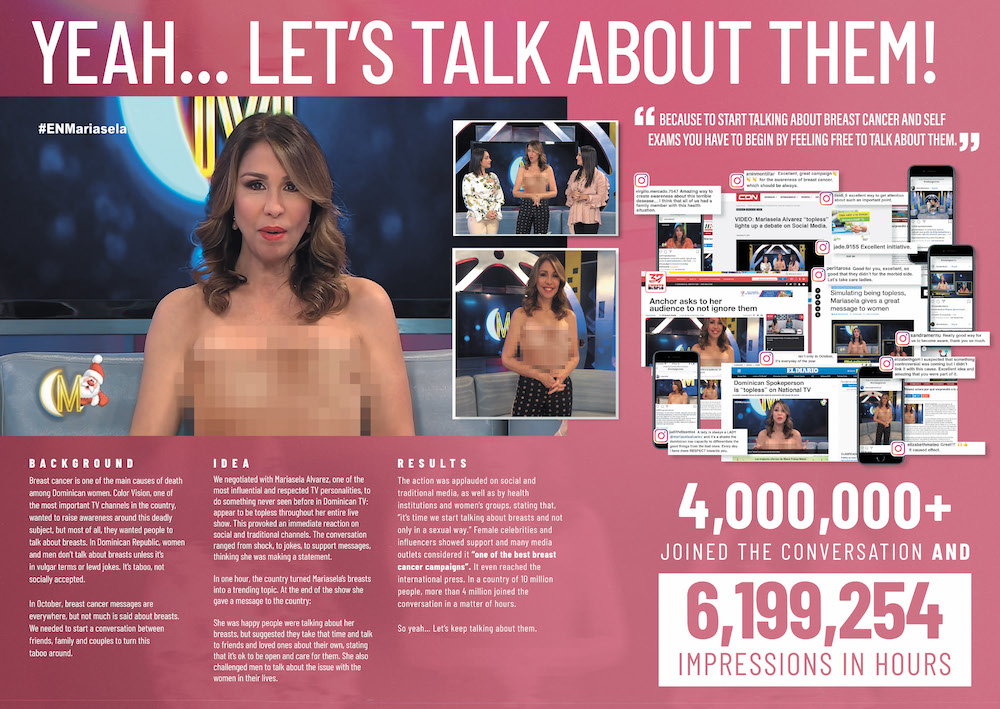 Breast cancer is one of the main causes of death among Dominican women. Color Vision, one of the most important TV channels, wanted to raise awareness around this deadly subject, but most of all, they wanted people to talk about breasts. In Dominican Republic, women or men do not talk about breasts unless it’s in vulgar terms or as lude jokes. Its like a taboo, not socially accepted. In October breast cancer messages are everywhere, but not much is said about breasts. It needed to open a conversation between friends, family and couples and turn this taboo around.

It had to create a strategy to change the taboo within the country and start talking about breasts more freely. In Dominican Republic TV is the most important medium, preferred by 95% of Dominicans. In the country, media is very strict on nudity or anything that would go against its culture’s values. It wanted to create a live action that would challenge that. Starting a big conversation, something that would spread like wild fire catching in one hour the attention of the media as well as the nation and then change the conversation.

The agency negotiated with Mariasela Alvarez, one of the most respected TV personalities, to do something never before seen in Dominican TV: appear to be topless throughout her entire live show. This provoked an immediate reaction on social and traditional channels. The conversation ranged from shock, to jokes, to support, thinking she was making a statement. In one hour, the country turned Mariasela’s breasts into a trending topic. At the end of the show she gave a message to the country: She was happy that people were talking about her breasts, but suggested they take that time to talk to friends and loved ones about their own breasts, stating that it’s ok to talk about them openly and that we should take care of them through self-examinations. 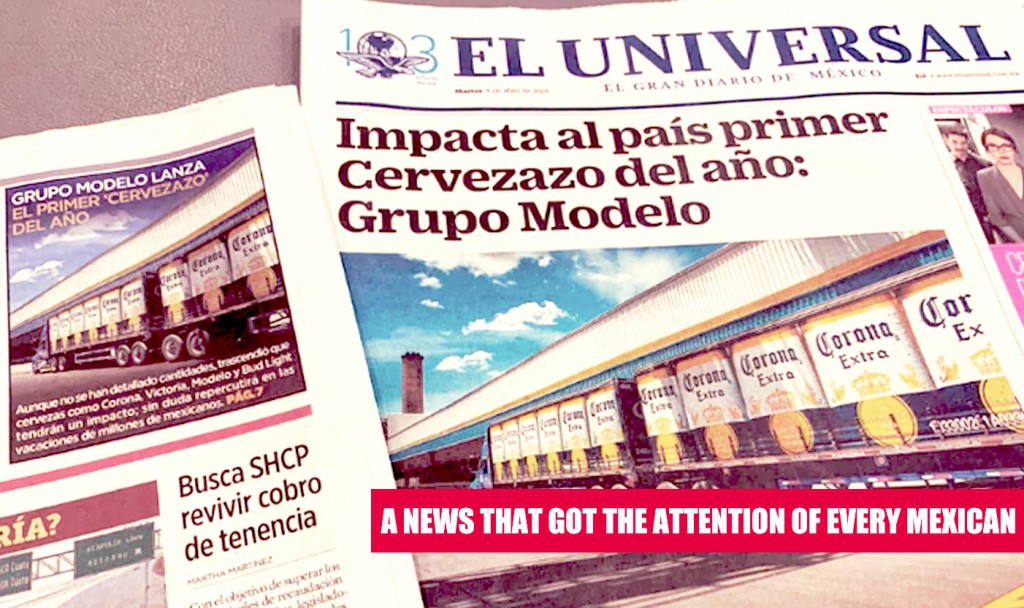 Easter in Mexico is marked by Semana Santa (Holy Week) and the country is awash with elaborate and much-anticipated processions and ceremonies. Schools close down and the nation is gripped with holiday fever! It’s a week that’s treasured by the whole country. People go out every day and have a good time, which is why it’s the single most important week of the year for beer brands. Almost a fifth of annual beer consumption in Mexico takes place during Semana Santa! Rising prices in Mexico have sadly become the new normal. After the 2018 general elections, Mexicans were full of hope. The new Government promised to drive every day prices lower by reforming the energy/gas market – which feeds into the cost of all goods and services – but, sadly, prices have continued to rise. It realised the challenge was to break this trend and boost awareness of Grupo Modelo’s fantastic offers.

To be more than a promo, we had to make consumers feel positively attracted to Grupo Modelo, engaging them to the point where our beer was something more than just cheaper. The message needed to create a campaign around price that was about more than just price. Something that would get consumers talking. The strategy would be to demonstrate that Grupo Modelo delivers. It would succeed where the government hadn’t and create an unexpected surprise. It would play to Mexico’s natural optimism; because no matter how bad the news is, they always try to see things with the sense of humor that characterises them.

To bring this strategy to life, it would create a media first, by making headline news that every important newspaper and media outlet would to share with the whole country. By studying the previous price rise bombs, we found “El Gasolinazo”- one of 2019’s most impactful and wide-spread headlines used to announce the gasoline price rises. Adding a suffix “azo” to the noun “gasolina” (gasoline) has made the phrase memorable and well-known among Mexicans. It would mimic this media approach to announce the first beer change of prices of the year: “EL CERVEZAZO MODELO”. This use of political language would create an expectation that prices were about to rise, allowing the company to actually announce the really positive news for the Semana Santa: cheaper Grupo Modelo beers.