As video continues to dominate social media, the rapid adoption of live-streaming from social media giants Facebook, YouTube, Instagram, Twitter and Snapchat has captured the attention of marketers across the world. From real-time broadcasts to engaging social communities, the opportunity for brand integration and interaction with live-streaming is proving more powerful than ever.

The ‘Best Use of Live-Streaming’ category on the Festival of Media Global Awards 2019 shortlist highlights some innovative examples of brands exploring new territory with the medium. With a broad spread of campaigns from countries across the globe (more than half in Europe alone), live-streaming techniques were most popular for sports and entertainment (50%), food & beverage (25%), automotive (12.5%) and technology (12.5%) brands.

From live-streaming awards and events to integration with online games, brands are tapping into consumer passion points to increase relevance. Half of the entries in this category centered around sports and eSports to create a new layer of engagement from the use of AI algorithms and live predictions to elevate the fan experience.

Online and social influencers played a notable part in the majority of these campaigns to give viewers a familiar face to connect with, at the same time humanising the brand to increase the personal one-to-one connection the channel offers.

From Instagram Live to Twitch, Sky Sports to YouTube and Twitter, media collaborations were utilised in innovative ways to create meaningful connections and even give brands an opportunity to explore uncharted territory for branded content. As a channel, live-streaming also proved that a country-specific activation has the capability to create international engagement by utilising the global nature of social media.

Social communities and interactive elements to support the live-stream broadcast were integral to creating new levels of engaging and innovative experiences. Real-time conversations and responses really allow consumers to immerse with the brand, and take the story beyond a single broadcast to encourage social media interaction, creating longevity for the brand message and using content to drive deeper conversation.

The spontaneous nature of live video already gives brands an authentic, transparent and personable channel from which to share their stories. Opening up a two-way connection between brand and viewer enables marketers to create a level of interaction that can humanise a brand in a way that no other medium currently can. The real value for live video comes from its authenticity, giving brands an opportunity to disrupt in new and exciting ways to drive deeper engagement. 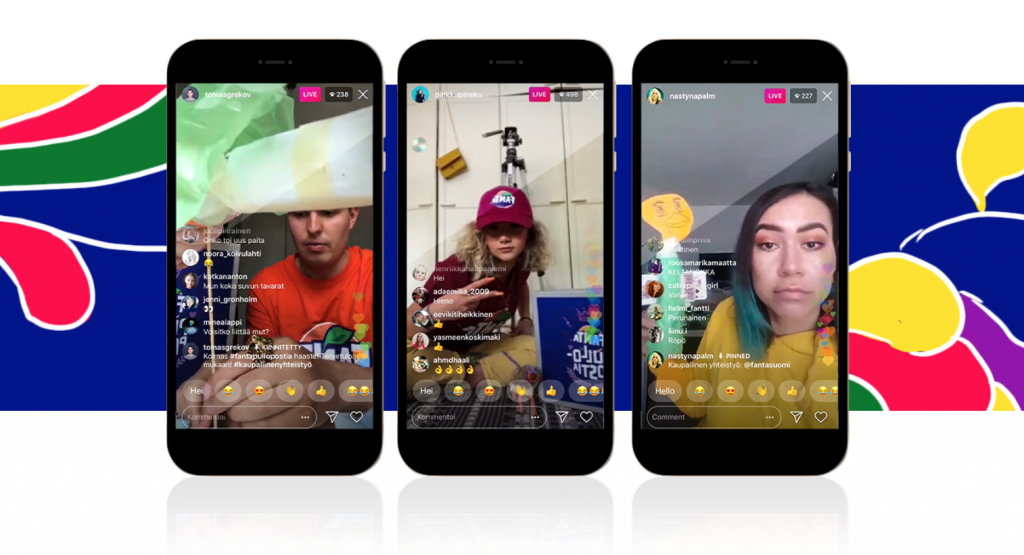 Message in a Fanta | Fanta (The Coca-Cola Company) | Isobar | Finland

Shortlisted for: Best Use of Live-Streaming (BRONZE WINNER)

With Message In A Fanta campaign, Isobar wanted to create an even more engaging connection with Fanta’s main target group, the teenagers, and boost summer sales by creating an innovative social experience that included influencers and utilised Instagram Live at its core. With the emergence of the different Instagram features, mainly Stories and Live, it wanted to carve out its own space and find some uncharted territory within the app for creation of branded content.

The agency wanted to design an innovative concept that should highlight collaboration between the influencers and their fans, all happening live in a Fanta-branded environment. Based on experience, there are three aspects that make any live stream interesting for people to follow. Firstly, you need a sense of surprise and excitement. Anything can happen when you go live. Secondly, a time restriction makes the live stream easier to commit to. If the viewer knows the stream is going to last for a specific time, he or she is willing to stick around for the whole thing. Thirdly, you need a likeable host that invites you in for the live journey. That made it choose three popular influencers who already embodied Fanta’s attributes as easy-going, innovative content-creators.

Throughout the summer the agency sent out mysterious messages to its influencers in the form of small paper rolls stuffed inside Fanta bottles (Thus #MessageInAFanta). At a prearranged moment all three influencers launched into an Instagram Live and opened up the message at the same exact time. Every time the message contained a fun challenge where the influencers had to create or construct something fun, for example a Fanta catapult, a Fanta pet or a Fanta house of cards, using items from a special Fanta DYI construction kit they had been sent beforehand. The influencers asked their fans for help and the comments kept pouring in throughout the live stream. 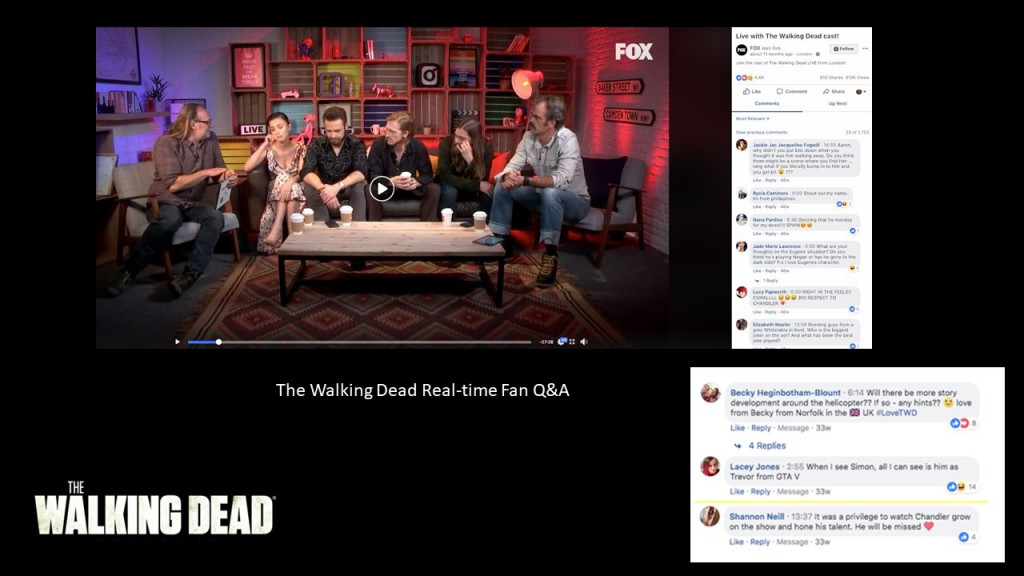 Shortlisted for: Best Use of Live-Streaming

Season 1 of the renowned zombie apocalypse series launched November-2010 and rapidly became one of the most popular TV titles in the world. Yet, television series live and die by their TV ratings (an external measure of popularity) and it would not be possible for the momentum of FOX’s The Walking Dead to last forever. With this in mind, ratings for Season 8 showed that UK ratings and online reach were decreasing. Not only this but winning viewers is a constant battle; FOX had stiff competition.

FOX teamed up with Facebook to produce shoot and stream a live Q&A with key cast members; Christian Serratos, Ross Marquand, Austin Amelia, Tom Payne and Steven Ogg. TWD executive producer, director and special effects guru Greg Nicotero hosted the Q&A. The Q&A was announced on 8th March 2018, when FOX posted that the livestream with The Walking Dead Cast that would be taking place the following day. The Facebook Live session was also integrated into an Instagram Story showing behind the scenes content and a link to the live broadcast.

With various API functions the Q&A incorporated fan-made artwork, memes of the show and exclusive scenes from the upcoming season, all whilst keeping the cast at the centre of the screen showing their reactions and sharing their thoughts. The pinned comments function highlighted fans remarks at key moments during the session. This enthused viewers and vamped curiosity to watch S8 resulting in a Live connection with a 73,000 member fan group.