As one of the most internet-addicted regions across the globe, ‘the rising wave’ of Southeast Asia and its digital transformation is in full swing. And marketers are tapping into this brave new world of digital media engagement by hijacking the second screen experience to give consumers something unique, diverse and relevant.

According to a new report into consumer online habits, by Hootsuite and We Are Social, the Philippines is the most internet-addicted country in the world, clocking an average 10 hours and 2 minutes of screen time every day. Both Thailand and Indonesia also featured in the top five with 9 hours and 11 minutes and 8 hours and 36 minutes spent online each day, respectively. Brazil and Colombia ranked second and fourth, respectively, rounding out the top five.

“Southeast Asia is beautifully diverse, with digital providing connectivity within markets and beyond,” said Miranda Dimopoulos, Regional CEO of the IAB Southeast Asia and India. “We can tangibly see that it is digital’s time to shine even brighter, so experiences keep getting better, smarter and more meaningful.”

Entries from Southeast Asia represented more than one quarter (26.2%) of shortlisted entries for the Festival of Media Asia-Pacific Awards 2019. Notable performances came from Indonesia, Malaysia and the Philippines, while entries from Singapore, Thailand and Vietnam also featured. FMCG and food brands dominated entries from the sub-region of the continent. By category, there is a heavy focus on digital, technology, mobile and real-time marketing, a strong reflection of the region’s rise to digital.

It’s no surprise that one of the key themes to emerge from Southeast Asia was the use of real-time technology and mobile devices to provide a second screen experience for consumers who are still engaging with TV. Use of real-time TV sync technology and programmatic display across digital and mobile, enabled a range of advertisers to tap into the high proportion of dual-screening habits amongst consumers. This shows that consumers want choice and control of the content they consume and highlights a key opportunity for advertisers.

In addition to these multi-screen digital techniques, traditional media must not be ignored. From branded LED displays on public transport to outdoor classrooms, the integration of digital and the real-world is opening up new channels for advertisers to connect with consumers in a hyper-relevant and hyper-targeted way, with direct links to purchase through e-commerce.

Data and programmatic, dynamic video, in-game integration, search and social media were other key themes to take from these entries, highlighting the need for a strong digital focus in creating the right kind of consumer connections across the region.

“Better content, better use of data, and better internet connectivity; these are three key themes which will dominate growth of digital advertising across Asia this year,” writes Henry Shelley, general manager, Southeast Asia at The Trade Desk. “The convergence of digital and traditional advertising, and the massive volume of data that is now available, means advertisers can more effectively target their audiences in myriad ways.”

As the Southeast Asia market transitions towards a digital, more personalised viewing experience, the opportunity for brands is to be customised and hyper-relevant, all done with a sprinkle of humour. Advertisers that will come out on top are those which are increasingly tapping into unexploited areas and channels to create new media opportunities that appeal and engage with these digitally-savvy consumers across the region.

We put the spotlight on two Festival of Media Asia-Pacific Awards 2019 shortlisted entries, which highlight this trend: 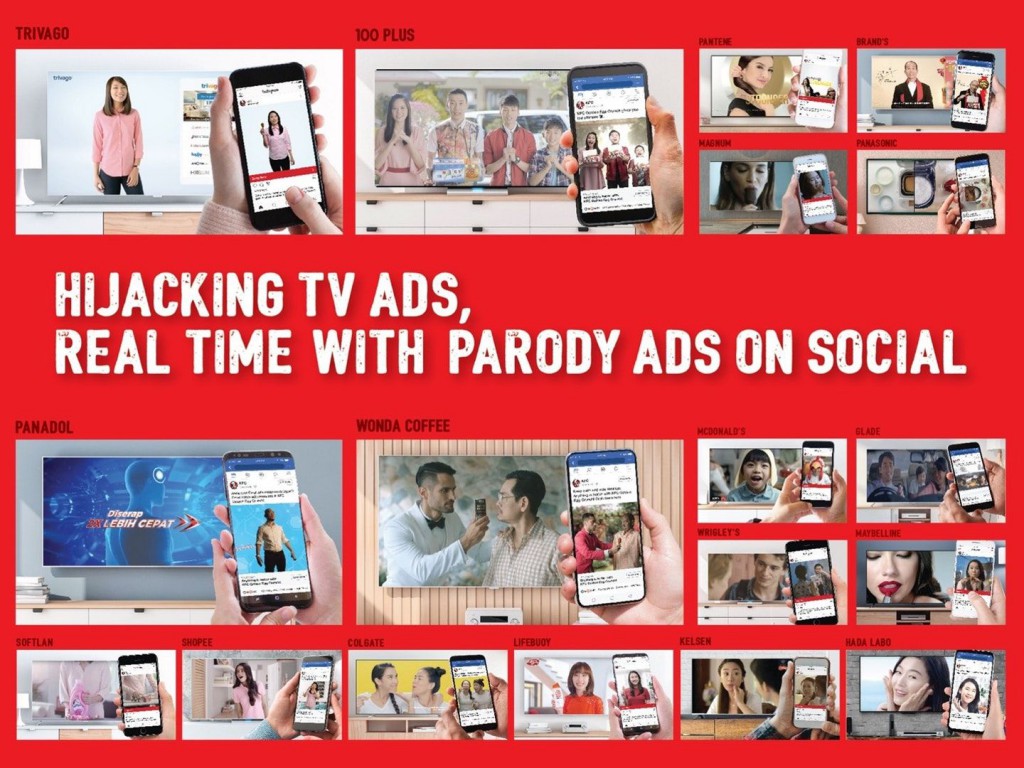 Shortlisted for: The Creative Use of Media Award

A sell out goal demanded an unapologetically high Top of Mind recall from the KFC Golden Egg Crunch. And in Malaysia, TV is the ‘go-to’ medium when Reach and Recall need to be delivered. However Chinese New Year (CNY) is a season when the fast food category goes ballistic on media – 2017 recorded a +377% increase in ad spend versus 2016! KFC had to ‘Outsmart and not Outspend’ on TV.

Universal McCann used second screen sync technology to hijack ads of all brands that were advertising heavily on TV during the CNY period. With this ingenious outsmarting strategy, not only would it have its own TV budget to benefit from, it could ride on all the big CNY spenders across categories. So, for example, when a McDonald’s Ad played on TV, people would see a visually similar ad on their mobile but with a KFC Golden Egg Crunch twist. The mobile ad would ride on the same visual elements of the McD ad and yet say how the Golden Egg Crunch was better – a once in a lifetime multi-screen experience. And this was contextualised against every other Chinese New Year ad to create a KFC Golden Egg Crunch experience like no other.

The agency econometrically modelled 10 years of CNY commercials to understand patterns on budgeting, media scheduling, reach build-up, as well as social success and search behaviours. Using these learnings it identified 20 TV commercials that it predicted would become popular during CNY with heavy media investments and social currency. For each of these ads, it built an algorithm that singled out its most memorable part and used that as inspiration to create a snappy KFC parody. It had 20 KFC videos mimicking the 20 popular ads during CNY – ready to hijack mobile screens, at the same time. The campaign leveraged the TV Sync technology; which worked in such a way that it created a unique identifier (an audio and visual fingerprint) for every pre-identified TVC. So when the pre-identified TVC was on air – the technology detected the fingerprint, which in turn activated programmatic buys on mobile, across Facebook and Instagram. 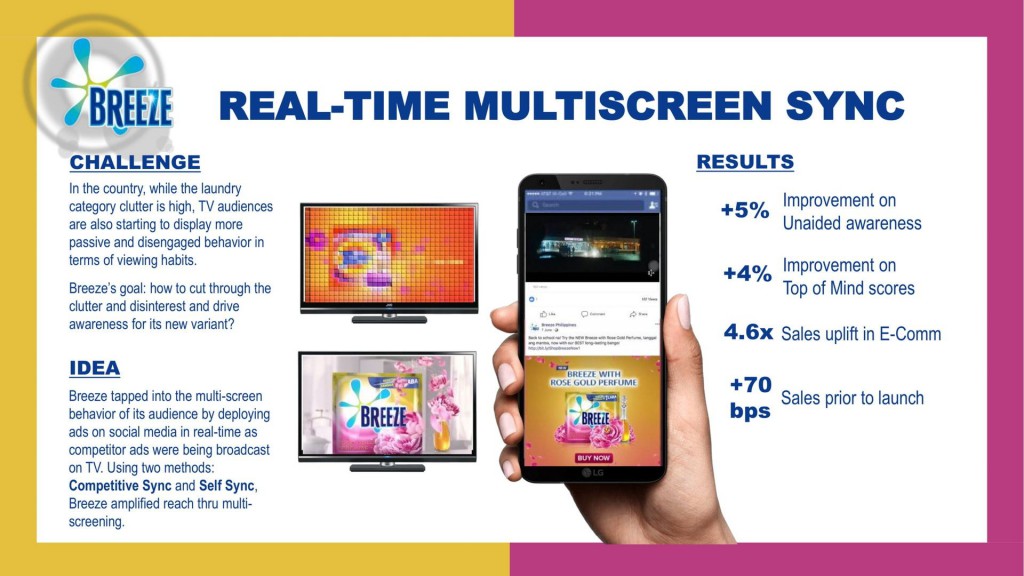 Shortlisted for: Best Use of Technology

In the Philippines, while the presence of the laundry category on TV is high, an increasing number of TV audiences are starting to display more disengaged and passive behaviour in terms of viewing habits. More than 60% multi-screen and use mobile while watching TV – mostly during commercial breaks and to keep up with social media. Breeze wanted to reach out to Filipina women ages 24-44. They are problem solvers and are in charge of homecare for the family. Creative ads don’t appeal much to them, and they are more receptive to simple and informative ads that provide solutions to their everyday problems.

As TV was still the channel with the highest reach in the Philippines, it remained a key channel for the campaign. But Breeze knew it had to overcome TV clutter and raise awareness with engaging ads on second screens, since being present on only one platform would not have enough impact. Breeze tapped into the multi-screen behaviour of its audience by deploying ads on social media in real-time as competitor ads were being broadcast on TV. By syncing its ads with competitors’, Breeze established a connection with the audience and countered the competitor’s heavy TV presence. Breeze also synced the campaign’s digital ads with its own TVC, which delivered incremental reach and made the campaign actionable by leading consumers to e-commerce.

The execution hinged on SilverPush Technology’s capability to fingerprint and identify each TVC that airs during a commercial gap. With its patented fingerprinting technology, it was able to accurately pinpoint the exact moment a TVC airs as locally installed servers monitor TV networks round the clock. The detected TV moments were used as triggers to deploy digital presence across high reach digital platforms. The process from TVC detection to the serving of digital assets happens split seconds after the TVC airs allowing the brand to generate exposure within the target market’s secondary screen in almost real-time. The technology not only offers real time sync but also uses high reach digital platforms like Facebook and Google, which both allow targeting basis on specific markets, demographics, which ensured minimal spillage.