As the fastest growing ad market in the world, India presents a unique marketplace for advertisers. Despite the vast issues brought on as a result of the stark urban/rural divide, the proliferation of new media channels and devices are giving advertisers more opportunities to connect with consumers, with a focus on education, awareness and driving behavioural change.

According to GroupM’s latest ‘This Year, Next Year’ ad forecast, total ad spend in India is estimated to grow at a rate of 14.3% in 2019, far outpacing global growth of just 3.6%. This growth will be spurred on by the growing economy and driven by digital (including mobile) to reach Rs 80,678 crore (approximately $11.33bn). The report cites that the FMCG, automotive, e-commerce, technology and telecoms sectors will contribute to two-thirds of ad spend across the country. And it will witness growth in all media segments, not just digital — offline media is poised to continue to grow, contributing to around 80% of all ad spend in 2019.

“With the surge of technology, better insights and relevant engagement across different platforms, we are expecting marketers to build superior consumer connections for brands,” said Tushar Vyas, President Growth and Transformation for GroupM South Asia. “2019 will witness a faster growth in digital and we are expecting digital to be at 20% media mix. As we are witnessing one in every three Indians digitally connected, we can expect the convergence of data, digital and content to deliver seamless and powerful solutions to brands as well as constantly adding inventive practices into the market.”

In comparison to its global counterparts, India is the tenth largest advertising market and it’s the third highest contributor to incremental ad spend, behind the US and China. But while it may have been slower to adapt to digital due to infrastructure constraints, it is one of the most mobile savvy markets, with Statista predicting that the number of smartphone users in India could reach almost 468 million by 2021.

For the Festival of Media Asia-Pacific Awards 2019, India was the third most represented country on the shortlist, behind China and Australia. With a 12.7% share of the pie, there is plenty of work to analyse to see how advertisers are engaging with this market. By advertising sector, FMCG leads the charge accounting for 69% of the entries from India, followed by healthcare (19%), Food & Beverage and Not For Profit (each at 6%).

First and foremost, a prominent trend across the Indian entries was on corporate social responsibility (CSR) initiatives which address a real cultural problem, tackling taboos and educating Indian consumers on things that can make a difference and truly enrich their lives. This focus highlighted the ways in which brands are taking on a greater purpose by navigating the challenges brought about by the urban-rural divide that is so prevalent across the country.

Digital was front and centre but also played a big part in adding a multi-layered engagement element to traditional campaigns. Mobile was also a key feature as brands explored a range of uses, both in feature phones using mobile voice to communicate messages and also through smartphones, which utilise social media and instant messaging (including chatbots) as a brand engagement tool.

Some campaigns offered a unique take on their use of data, highlighting the increased sophistication in data techniques; for example, one campaign used mobile data gained through a telecoms partnership to customer and provide contextual communications, while another used external data that brought in real-time information about AQI levels, to create a hyper-localised campaign through a mobile app.

Partnerships with influencers — in terms of Bollywood stars, celebrities and social influencers — were forged throughout a number of campaigns to help spread the brand message. This was reflective of an increased focus on content spanning TV, print, video, mobile, social and beyond.

Adam Gerhart, CEO of Mindshare US, previously shared some thoughts on some of the recent work coming from emerging markets, including India: “There’s a lot that can be learned from how they build and execute provocative ideas – there was a lot more risk-taking in those submissions and in many cases, more ingenuity to deal with issues such as Internet access, cultural dynamics, and more. In some ways, limitations or restrictions (budget, regulations, etc.) can liberate the brave.”

With advertising technology evolving rapidly, new media channels and devices are making India’s ad market more colourful and diverse than ever before, giving advertisers the opportunity to engage with consumers in a variety of ways. Brand campaigns which address a key consumer need, drive a behavioural shift or perception, are creating purpose like never before.

We put the spotlight on two Festival of Media Asia-Pacific Awards shortlisted entries, which highlight this trend: 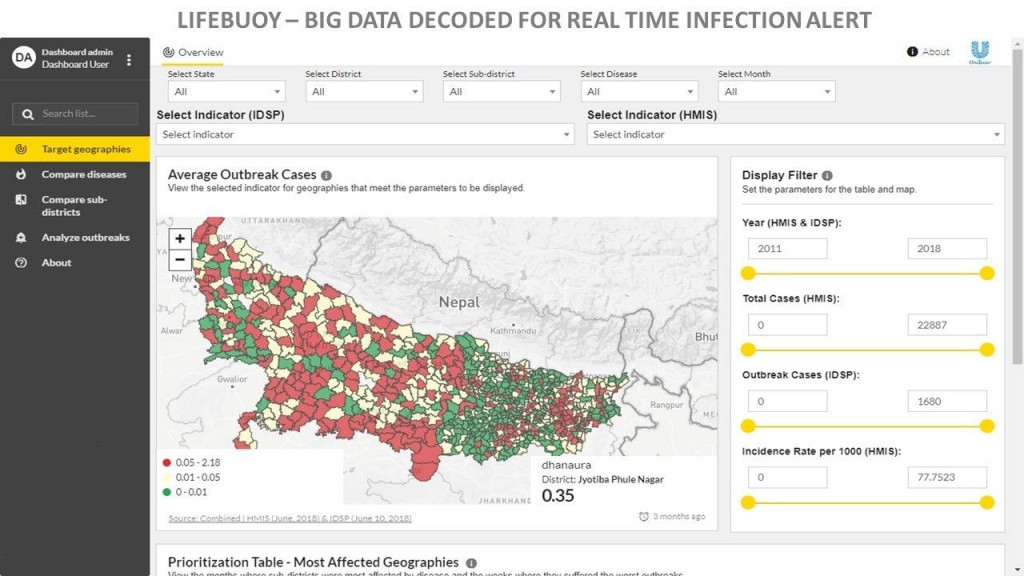 70% of sales for Lifebuoy, India’s number-one soap brand comes from rural India. While Lifebuoy has made successful inroads into urban India and built its equity as the best soap for protection against germs, rural has always been a tough battle with maximum share loss coming from this sector. With low traditional media penetration, low literacy rates and 79% of consumers using feature phones in the largest states of Uttar Pradesh (UP) and Bihar contributing to 30% of rural population, reaching consumers for driving relevance is a challenge.

Lifebuoy wanted to drive salience and hand-hygiene behavioural change in rural India by creating a data-led infection alert system for predicting severity of disease incidence and prioritising villages most vulnerable to life-threatening communicable diseases. Mindshare institutionalised the Adaptive Data Lighthouse (ADL) – a Data-led Infection Alert System for micro-targeting disease vulnerable villages at scale with contextual communication. Fuelled by data from 34,000 hospitals across 822 rural villages in UP & Bihar, the data layer of ADL was created which comprised of historical incidence data pertaining to 21 communicable diseases at a village level. This updated weekly, in near-real time through end-to-end data pipelines.

Lifebuoy partnered with leading telecom players in India, Vodafone, Airtel & Jio to leverage a 100M mobile database. This database was mapped to the weekly report from the ADL to ensure customised messages were pushed only to infection affected villages. On average 8 million calls were dialled every week covering a minimum of 60 relevant and prioritised villages / sub districts across Uttar Pradesh and Bihar to ensure consumers take preventive measures against infections for them as well as their families. 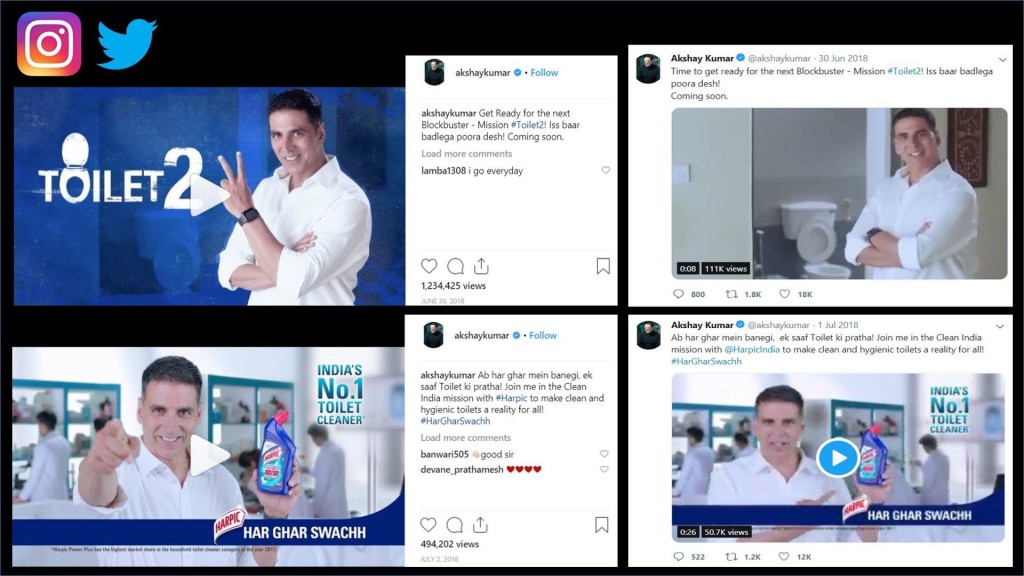 Shortlisted for: Best Use of Talent

India is on the largest toilet building spree in human history. The Prime Minister Narendra Modi “Clean India” mission aimed to construct 111 million toilets by 2021. Almost 80 million new household’s toilets have been constructed in 2018. But growth was elusive. The problem is ‘cultural’. Open defecation is culturally acceptable. Many Indians have grown up seeing everyone do it in the open. In some areas there is also a belief that open defecation is good and healthy. So while the toilet infrastructure is growing rapidly, there is no social consequence to not using it and continuing with old habits.

The strategy was simple; not only did Harpic have to make the new toilet household feel good about their decision, but also propagate the negative social consequence of not using it. But the brand could not do this alone and needed a powerful ally. Akshay Kumar, a leading Bollywood actor has been a strong supporter of the sanitation movement in India and has championed this issue powerfully through his movies (“Toilet – A Love Story”). He is also the brand ambassador for the Indian government’s flagship “Clean India Movement”.

With an ally in place, Initiative turned its attention to the idea or platform that would leverage this partnership. The #HarGharSwachh mission (#EveryHomeClean) campaign sought to drive change by normalising the act of cleaning. It encouraged households to question taboos linked with cleaning toilets and feel proud to own a home which included a sparkling clean toilet. It was taken across media and Akshay Kumar played a focal role from inception to end and across mediums — spanning social media, TV, newspapers, sponsorship and trial.