The Caribbean, beyond sunshine and sandy beaches, is known for colour, music and fun – and the same can be said for marketing in the region. As social media usage continues to rise, brands are tapping into the channel in new and exciting ways to engage and appeal to the social and fun-loving nature of its consumers.

Puerto Rico’s social media landscape presents an attractive option for marketers in engaging with consumers in the most relevant way. As we take a deeper look at shortlisted entries from Puerto Rico for the Festival of Media LatAm Awards 2019 – which mainly featured in the new ‘Best of the Caribbean’ category – social media proves to be the central medium of choice, supported by other digital media channels.

By brand category, the most popular sector from Puerto Rico was Food & Beverage with a range of brands engaging in social interaction with consumers via a range of different methods – all with one end goal of inserting themselves into the social conversation and create engaging brand communications.

From the creation of bespoke apps to popular social media channels like Facebook and more specifically Facebook Live, the focus of communication in all the entries was aimed at appealing to the fun and active personality of Puerto Ricans. And teaser campaigns leading to a big reveal were a popular way of building intrigue.

In the social media space, influencers and personalities proved to be important in this market to create a more authentic connection with consumers through the power of online communities, enabling brands to tap into their dedicated followers.

These social interactions were created primarily in the mobile space, with support from other media channels such as OOH – but all with a strong focus on video across digital platforms.

In a blog post from Media InSite, a Caribbean-based company that specialises in real-time media intelligence for the region: “Larger Caribbean brands are playing in the digital space, of course, but are still comfortable engaging with the media that they know and trust. It’s the reason why we can see the trends in newspaper and radio ad spending that we do. This isn’t a bad thing for anyone folks spending in legacy media are still getting their money’s worth, and brands experimenting with new media have a chance to make their name in a still mostly untapped territory.”

For brands in Puerto Rico, marketing communications need to be fun, social and engaging in order to appeal to the specific nature of Puerto Rican personalities. While it would seem that mobile is the media channel of choice, this doesn’t mean neglecting other channels where local consumers are also highly engaged. Yet, to tap into this market in the most authentic ways, social should be at the core.

We put the spotlight on two Festival of Media LatAm Awards 2019 shortlisted entries, which highlight this trend: 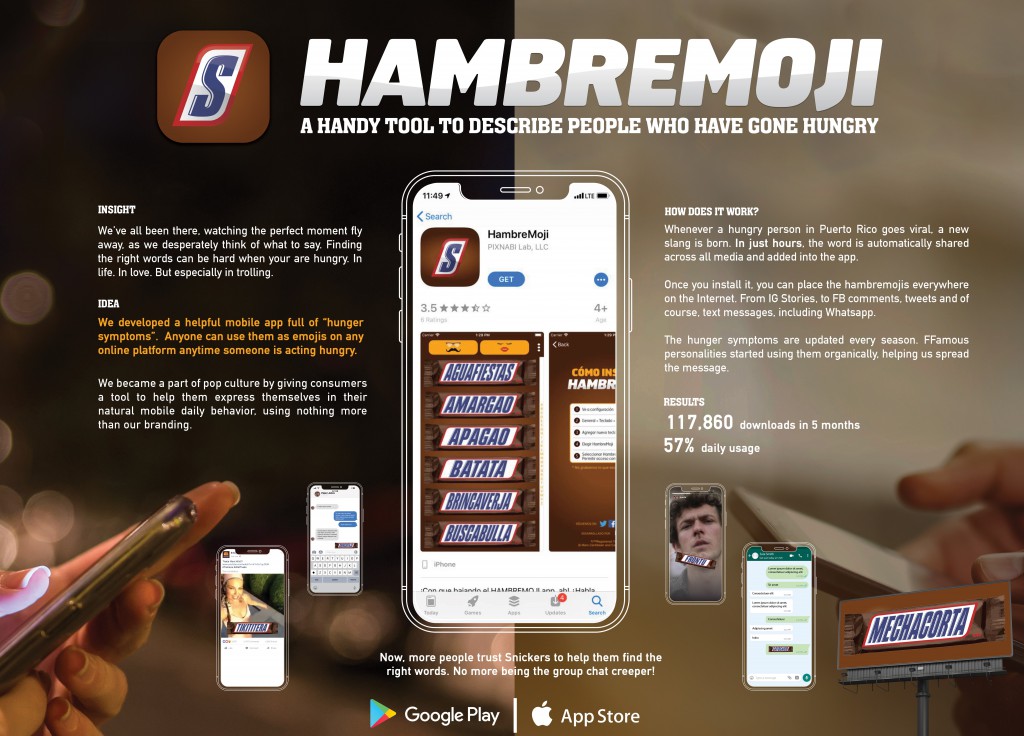 Shortlisted for: Best of the Caribbean, The Effectiveness Award

We have all experienced that moment – as we desperately think what to say, the perfect moment flies away. Finding the right words can be hard, especially when you are hungry. In life. In love. But especially in social platforms. The fun and active personality of Puerto Ricans has been an important part of the acceptance of the Snickers equity and message, adopting the message as part of the pop-culture. The way they interact and react in social platforms is very energetic. Snickers needed to give them a tool that would let them express naturally what they wanted to say at those special moments when people had “hunger symptoms”.

MediaCom needed to facilitate to consumers the usage of key symptoms that Snickers widely used in its content, to explain “hunger”. For this a keyboard app with “Symptoms emojis”, that will easily connect to any type of mobile device and link to all social platforms, would be developed. The strategy included to launch the App through a teaser to generate anticipation, use key influencers tactically for awareness and functionality, and use digital platforms, video and OOH to drive traffic towards the App.

A big expectation teaser with influencers was launched in social platforms and video. This showcased the main functionality of the App, the symptoms that were generated as “Hungermojis” in any social platform and started a wave of social interactions of consumers asking about the app. Snickers came with something new. The agency followed with digital video, out-of-home and social content that showcased where to download the app and how to use it. Influencers and personalities in the island maintain interest of the app in consumers by tactical use of the “Hungermojis” in different special occasions that merit, or whenever a hungry person became viral, a new slang was born. New words (symptoms) were created and the app constantly updated. 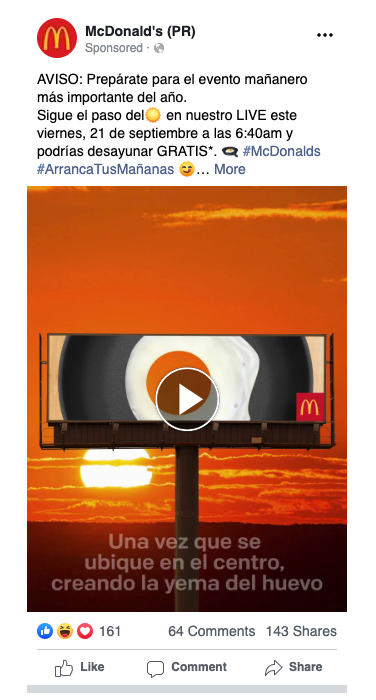 Shortlisted for: Best of the Caribbean

Any weather-related event grabs everybody’s attention with an increase in getting more information through social networks, with mornings being the peak period to get a grip on what’s happening. The past years have been full of astrological events. Super Moons, Blood Moons and the list goes on. People are fascinated by them, and this time, McDonald’s wanted to give them a good reason to wake up early.

For the brand OMD wanted to build anticipation and to launch McDonald’s new breakfast platform. For that, the agency created a human-made “astrological event” and through the use of a scale model, tiny billboard, it streamed it live on Facebook to happen during the early morning hours of September 21st.

One day before, it made a teaser to build anticipation, and to make followers aware that something was going to happen the next day. Then it placed a billboard, not just a traditional billboard unit but a tiny scale one, which was strategically aligned with the sun to create an eclipse effect. Once the Sun was at the centre of the billboard creating the yolk, a promotion with free breakfast was released and became available in all restaurants. During that period, followers just had to show the live stream at the restaurants to claim their free breakfast.