As global ad land gears towards a more digital future, the United Arab Emirates (UAE) and the Middle East region as a whole has been no exception. And with digital ad dollars expected to increase further over the next few years, storytelling content and social media are proving to be key for brands to engage with consumers in a culturally sensitive manner across the region.

A recent article in Gulf News, based on an interview with Elie Khouri, CEO of Omnicom Media Group MENA, suggested that $1 out of every $3 ad spend in the Middle East is now ending up in Silicon Valley, with the resulting effect being that more than $1bn is being lost by local media and ad agencies to the digital duopoly.

“Last year, the MENA region has seen a combined ad spend of $3.4 billion – and digital ads made up about 40 per cent of that,” said Khouri. “Now, out of that digital ad spend, over $1 billion has gone to Google, Facebook/Instagram, Twitter, SnapChat and, increasingly, Amazon. That’s money going outside of this region.

“It’s also money not going to publishers, TV stations, content producers, advertising and PR firms in the Middle East,” adds Khouri. “Those dollars are finding their way into (the balance-sheets) of the digital businesses in Silicon Valley or San Francisco rather than into our regional economy.”

But, according to the report, digital will still reign supreme – from 42% of all advertising spend this year to 50% in the next couple of years. “Then it should stabilise at that level for some time, because there is still a need for traditional media platforms,” Khouri said.

These findings are backed up by what we uncovered in our Festival Intelligence for entries from the region, all of which had a strong focus on digital. Of the seven shortlisted entries from the UAE to feature at the Festival of Media Global Awards 2019, food and automotive were the most dominant brand categories. The mix of categories ranged from content to data & insight, gamification, real-time marketing and effectiveness.

Social media proved to be the most popular medium for brands wanting to tell stories, with a strong focus on likes and positive comments to measure success. LinkedIn, Facebook and Instagram were utilised in a number of campaigns to allow for precisely targeted communication. Furthermore, real-time personalisation techniques were adopted to create relevance.

Given the prominence of culture and religion across the region, brands showed new and interesting ways to immerse themselves into seasonal festivities and tapped into the strong storytelling tradition in the region to create engaging content and stories that focused on emotions and highlighted the importance of family time during seasonal events.

In addition to influencer tie-ups, online video and animated content series on YouTube were created by brands through collaborations between agencies and media partners. While not at the forefront of any campaigns from the region, traditional media channels such as TV were not neglected entirely and continued to play a part in supporting wider campaigns.

As digital advertising is only set to rise further in the coming years in the UAE and beyond, it’s important for brands to have a digital and social presence in the region. But to really creating engaging connections requires culturally relevant storytelling content that taps into the social nature of consumers in the region. 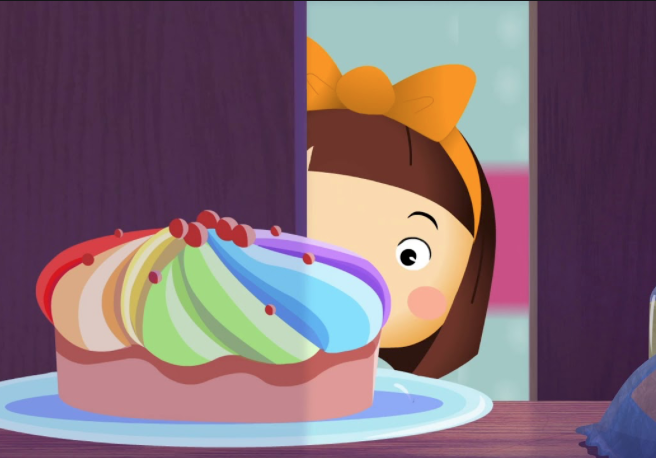 In Ramadan, chocolate consumption becomes much more socially driven. Mothers play an integral role in their children’s emotional education during Ramadan. Ramadan is about more than abstinence from food; it’s also a precious time for families, a season in which Muslims reconnect with their values. Mothers are the key to connect children with the purpose and practices of Ramadan. They want to motivate, impart self- discipline, and instill a sense of belonging and a real understanding of the meaning of the Holy Month. The GCC has a strong tradition of storytelling, especially in Ramadan. There is even a traditional figure called the Hakawati, the storyteller, who now appears in Ramadan to entertain and educate families. PHD Media spotted an opportunity to leverage this tradition to help mothers in their efforts to teach their children.

The strategy was to support mothers as they share Ramadan values with their children by providing engaging, kid-friendly content that they can enjoy together; called Growing Bigger Hearts. The agency felt that emotion was the correct route to explore during this season, as a result of the needs of the mother and the time she spends with her children. Clearly, this is not a unique avenue to explore during Ramadan; the season is hugely cluttered with advertisers in and out of the category using emotional messaging as a vehicle to the hearts of mothers. This approach was more nuanced; rather than showing emotion in advertising, the agency created a tool that allowed it to be a support to mothers in emotional moments, walking the walk in its desire to connect with mothers by being there at an important time – when they were connecting with their children. The result of this was the creation of the Qamar stories. These were three short animated videos each with a value specific to Ramadan. These were designed to help mothers educate and entertain their children about this prestigious season, in a way that no other brand had done before.

The popularity of online video in the region, especially during Ramadan, made it the natural choice as lead media for the campaign. In addition to the expected approach of pre-rolls and influencer tie-ups, the agency chose to commission its own content series, deployed on YouTube as the central hub of the campaign. It created a series of animated stories that help instill meaningful messages in an entertaining way. Each story had its own message directly related to the values of Ramadan: generosity, patience and hospitality. It raised awareness of the campaign through social posts on Facebook and Instagram, fitting the popularity of these platforms in the GCC amongst the target audience. The stories were then available on demand whenever mums wanted to share them with their kids. 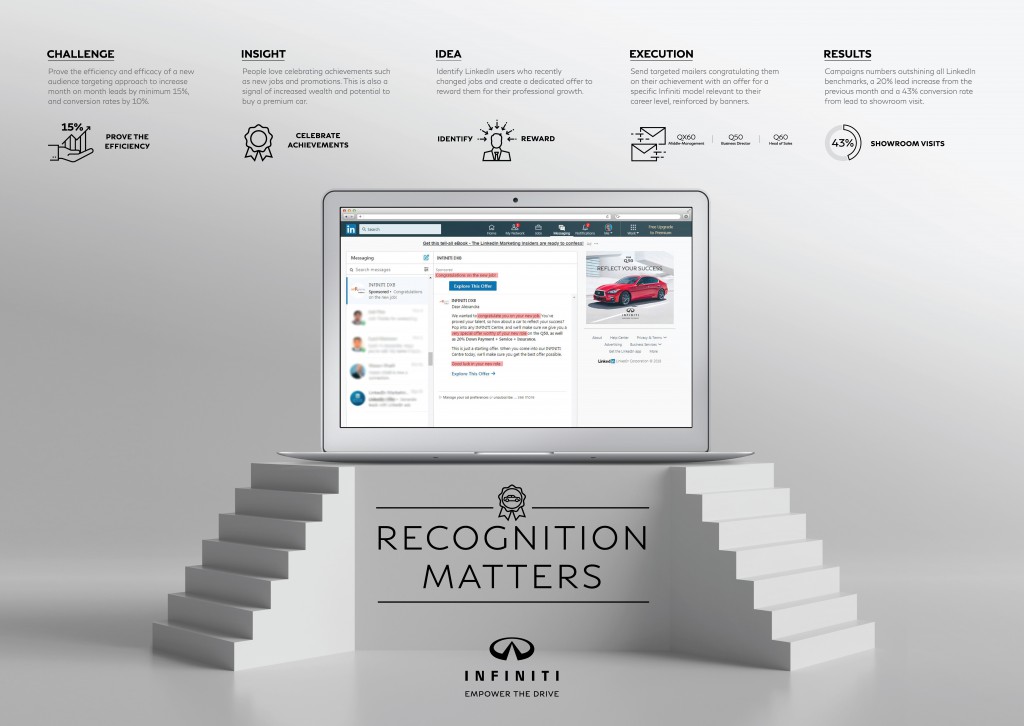 Shortlisted for: Best Use of Data & Insight Award, Best Use of Real-time Marketing, The Effectiveness Award

Spending on luxuries in the UAE market had started to reduce through 2017 into 2018 owing to two key factors: lower global oil prices reducing consumer confidence and the introduction of 5% VAT. Premium brands such as INFINITI (the luxury brand extension of Japanese giant Nissan) suffer in these moments. Yet even in tough market conditions, consumers still buy new cars – just in lower volumes. And INFINITI’s ‘affordable luxury’ positioning could paradoxically resonate more in this period – provided it could get a stronger message in front of more relevant buyers.  In the search for consumer insights, the agency considered purchase moments for premium cars such as the moment when people come into money; for example, after a promotion or new job.

From INFINITI’s broad audience (25-45 year old local Arabs, Arab expats, South & East Asians and Westerners earning minimum 5.5k USD/month), the agency considered career levels mapped to key vehicles in the INFINITI range.  Media cannot identify these targets directly. However, the one place where these targets share news of promotions and new jobs is LinkedIn. Which is a media space we CAN access. LinkedIn advertising normally allows for targeting based on job title; but it was looking for a sub-segment who had recently updated their job title. A slight tweak on the standard targeting that LinkedIn confirmed hadn’t been done before but that was technically possible to implement to enable Initiative to deliver a precisely targeted communication to the exact people it wanted to get a message in front of.

Step 1 involved building the LinkedIn audience clusters based on changes in job title at the levels of seniority we had already identified: mid-career executives, executives moving to middle management, and middle managers moving to director & C-level. Next, it mapped these audiences to the relevant car lines – the Q50 executive sedan, Q60 sports coupe and QX60 luxury SUV. Finally, it identified anyone in the UAE who had updated their profile matching the audience clusters in the last three months and delivered a customised communication in the form of a LinkedIn InMail complemented by personalised display ads through re-targeting. The messages offered congratulations on their new job, along with an offer for a new INFINITI car befitting their new status. The messages stressed the exclusivity of INFINITI’s offer for them in light of their achievement, lending an air of personalisation to the whole campaign.