As brands around the world are increasingly stepping up and taking a stand against social, cultural or political issues, marketers in Brazil are turning to stunts and experiential marketing methods to spread awareness and make a memorable and lasting impact.

According to the 2018 Edelman Earned Brand Report, nearly two-thirds of consumers want companies to take a stand on social issues. The report talks about the rise of the “belief-driven” buyer, which in Brazil is 69% of consumers.

It is unsurprising then that brand purpose and social impact are key themes to feature on this year’s Festival of Media LatAm Awards 2019 shortlist. But, more specifically, when we delve into the ‘Best Event / Experiential or Sponsorship Campaign’ category, 60% of the shortlisted entries come from Brazil, as well as 20% in Argentina and 20% in the Dominican Republic.

The category throws up a good mix of agency work coming from Ampfy, Initiative, OMD Dominica, Tech and Soul and Z+. By brand sector, the spread is also split between Travel, Tourism & Leisure, Financial & Utility Services, Entertainment and Not-for-Profit.

As we’ve explored in a previous Festival Intelligence article, sport is big business across Latin America, so there is a strong focus on sport within the entries in this category, with a particular focus on football sponsorship highlighting the local attitude and love for soccer.

Brand partnerships were also notable in these entries, with complementary brands in different sectors teaming up to create a unique partnership that plays on the beliefs and brand values of both companies, coming together for the love of the game to create something special and valuable for consumers.

Insight is the first and foremost consideration for any marketing campaign and given the vast differences between markets in LatAm, it’s interesting to note a real focus on local insights that show marketers understand their specific consumers which, in turn, gains trust and relevance.

By media, the entries show that traditional media is not enough on its own so brands are exploring with new, creative ideas that stand out and make a real impact through digital and social media.

Programmatic, real-time targeting, personalisation and hyper-local experiences proved key to creating campaigns that provide consumers with something useful and the use of influencers were paramount across many of the entries in this category, to use as a touchpoint to generate conversation and help amplify the message across social media.

Most notably from a social responsibility aspect, the most powerful campaigns set out to raise awareness about a subject – ranging from traffic safety to breast cancer and support for people with disabilities – and used media in a range of ways to bring conversations into the spotlight, by sparking emotions in consumers through their passion points.

Going back to the Edelman report, Nick Lucido, vice president of practice development at Edelman notes that Brazilians in particular have higher expectations than their global counterparts for the stands that their favourite brands take. “Take a stand,” he says and breaks it down into three types: Purpose, Culture and Activism. “Clearly articulate why your brand exists and make a proactive effort to address that purpose and authentically connect your stand to a relevant moment in culture.”

Only media (both traditional or non-traditional) has the power to truly send such an important message to the masses. What’s more, digital and tech developments are giving brands even more creative freedom to use it in such a way that connects with consumers on an emotional or experiential level. That’s when the real impact comes.

We put the spotlight on two Festival of Media LatAm Awards 2019 shortlisted entries, which highlight this trend: 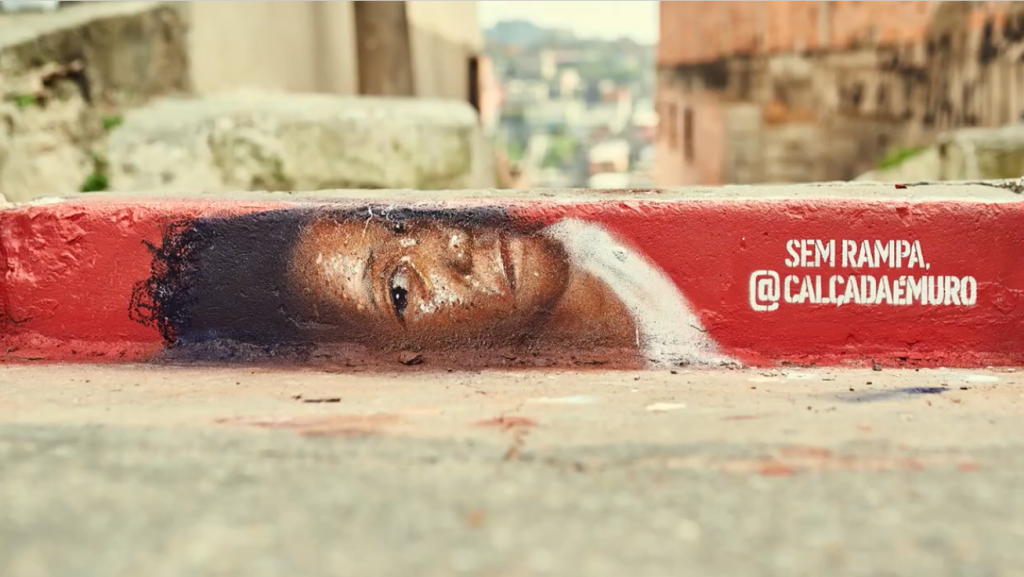 Without A Ramp, A Sidewalk is a Wall | Movimiento Superaçao | Z+ | Brazil

People with disabilities live in a world of limitations. Without mobility, they don’t have access to public health, education, work, leisure, etc. Sidewalks are something people don’t usually give much thought to. However, they are critical for urban mobility and can be a huge problem to a key part of society. As it is such an important problem for people with disabilities, Movimiento Superaçao wanted to generate awareness among the rest of the population and bring the conversation into the spotlight.

The strategy from Z+ consisted in using sidewalks as a media channel. Its use as the central element of the campaign would help to raise awareness about the problem a sidewalk without a ramp means for a person in a wheelchair. When a person with a disability encounters a sidewalk that is not accessible, it is as if he were facing a wall. To reflect this idea, the agency thought about turning those sidewalks that are not adapted to people in wheelchairs into authentic walls. It was extremely important for this initiative to have a real impact on the life of wheelchair users. Therefore, it was necessary to generate awareness for this activation to reach as many people as possible. To achieve this, the agency needed a channel that had a high reach among Brazilians, which was appropriate for photo content and was also used for activism. So, it chose Instagram as it provided everything needed to spread the message.

First, Z+ invited graffiti artists to paint sidewalk curbs that, the walls that only wheelchair users see. Then, it photographed the work and created a gallery on Instagram to show the graffities. It also created a website (www.calcadaemuro.com.br), to encourage other artists to take action and paint sidewalk curbs that needed an access ramp. All graffiti works were mapped on Instagram to make it easy for City Hall to locate. 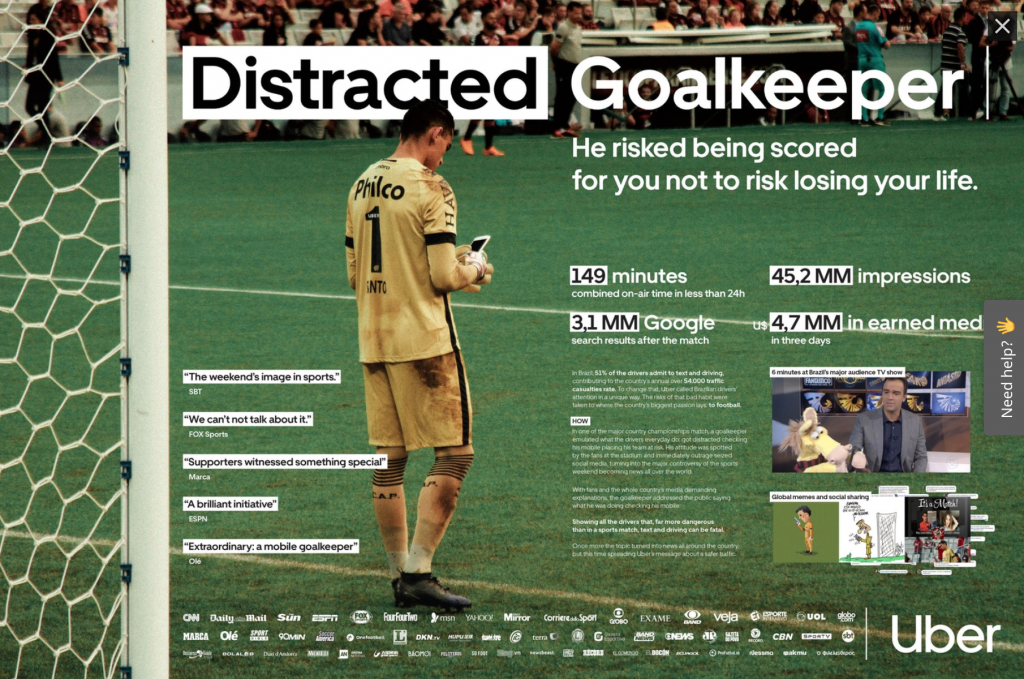 Today Uber in Brazil has 500,000 drivers and is an important ally in the generation of income for 13 million people who are unemployed. And, in order to fulfil its purpose of turning urban mobility more democratic and accessible, the brand needs cars and cellphones. But Brazilian traffic is one of the deadliest in the world. Texting and driving is the second major casualty cause, stands even before intoxicated driving. However, 51% of drivers still admit to texting and driving. To help Uber to change that, Tech and Soul found a unique way to call attention to that, making Brazilians experience the risks of this bad habit through their biggest passion: football.

During a major Brazilian championship match, a goalkeeper checking a mobile was spotted by football fans and the player’s irresponsible action stormed social media and press, generating the biggest weekend talk. When the goalkeeper finally linked his attitude with texting and driving, the whole country was paying attention. The idea was to capture the attention of the press with the cell phone being used in an inappropriate place. The intention was to make people angry at the situation at first, and when the subject was everywhere, the agency would reveal the true intent of the act. The message launched as #largaOcelular, which is used both for goalkeeper ́s Atletico and for those who drive using the cell phone. Uber talks to the public in general and this action was for Brazilians in general.

The agency planned the stunt with Atletico’s managers and the team’s goalkeeper, Santos. At the game’s first moments, without telling even his teammates, Santos checks his mobile which was immediately captured by fans who promptly shared stills and videos on their timelines. The agency monitored social media and helped the news to spread organically by sending the video anonymously throughout Twitter, Facebook and Instagram to soccer fans, digital influencers and sports groups, etc. At the very beginning of the second half, sports journalists and columnists started commenting too. Outraged against the player’s attitude, different interview channels chased him by the end of the match demanding explanations. The next day in a press conference at Atlético Paranaense club is where the Uber and Maio Amarelo action was revealed. A new wave of information stormed regular press and social media, spreading out the elucidation. The action was applauded by the majority of press and social media channels.