Multiple System Operators cannot keep dodging the OTT bullet for ever, but the inevitable injury need not be fatal, writes Andrew Sheehy, chief analyst at Nakono. 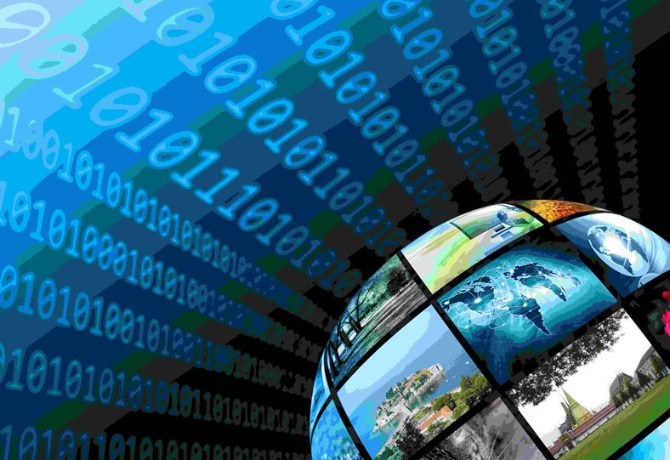 We estimate that there are presently about 500 OTT services worldwide which will earn revenues of $22.3bn (USD) in 2015, rising to $49.7bn by 2020. Beyond that, steady growth will continue for at least the next two decades.

The reason for continuing long term growth is that our projected revenue figures for 2015 and 2020 represent just 10.2% and 22.3% of the addressable market, respectively.

Not only does this mean that services like Netflix are just getting going, but it also means that the coming decades will witness a generational upheaval as television distribution in most markets shifts from legacy infrastructures like terrestrial wireless transmitters and satellites to the internet. 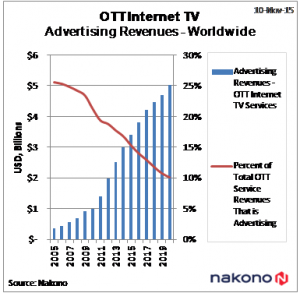 When defined in terms of service revenues, the largest segment of the television industry comprises about 1,100 Multiple System Operators (MSOs) who will together earn around $220bn in service revenues in 2015 on a worldwide basis.

These companies provide subscription-based access to television, internet, voice and sometimes mobile service and have spent decades building dedicated infrastructures which they use to deliver their services. But the video aspects of these vast networks – and the people that are required to operate them – will eventually become redundant.

But while the internet poses an existential threat to traditional MSOs, it will be some time before there is a substantive revenue impact and the type of impact will depend on the type of MSO under consideration.

Compared with how internet has savaged DVD and Blu-ray video revenues – falling from $51.8bn in 2005 to just $24.3bn in 2014 – MSO revenues have held up remarkably well. In fact, on a global basis, it is hard to see any significant effect at all.

There are four main reasons for this:

– Changes to reporting policies mask what is really going on

– Consumers are using OTT in addition to, not instead of their MSO service package

– MSO s are running aggressive ‘do or die’ retention programmes

Taking all of these factors into account, rather than a direct cannibalisation of MSO revenues, what I think is more likely to be happening now is that people are retaining their MSO subscription, but they are using Internet-TV services in addition – with the money being spent on OTT services mainly coming from reduced spending on physical video.

Although the uptake of OTT services is causing total TV viewing time to increase (when all consumption devices are taken into account), the total viewing time for the MSO provider’s video packages is falling. But, so far, the reduction in viewing hours has not been enough for people to cancel their video packages.

If we look carefully we are beginning to see reduced viewing time impacting on the advertising revenues earned by some leading MSOs (eg Comcast in the US and Sky in the UK). But for the most part the market-level impact remains very small.

However, further ahead, as the content and features offered by OTT providers become more compelling and as overall consumer awareness of OTT increases, then we will see a much larger impact on the video revenues of MSOs whose premium video content offers will increasingly have to compete with much lower-priced alternatives.

“The impact of OTT on MSO is a bit like a slow puncture: at first, from the outside, there is no visible sign of a problem but on the inside damage is surely being done”

But there is some good news for MSO operators.

Firstly, OTT internet TV will exert increasing downwards pressure only on the video element of traditional MSO service bundles. This means that MSOs who are also selling fixed broadband and, in some cases, mobile service will be insulated to a degree.

Secondly, the content assets and some of the network assets owned by Pay- MSOs operators will remain valuable and these assets will be able to be commercialised in new ways using the TV platforms that are growing on top of the Internet.

MSOs operators will therefore be able to deploy up to five defensive strategies to counter the threat posed by OTT.

1 – Focus more on broadband: Fixed broadband will be a common denominator, regardless of how the TV pie is divided. MSOs operators that will be best placed to exploit this opportunity will be those whose networks can be connected directly to the homes of their subscribers.

2 – License content to OTT services: MSOs who are producing their own content have the opportunity to license that content to OTT services. This is not viable at present but when the total market footprint of OTT reaches a tipping point then commercial reality will force MSOs to monetise their content by distributing it more widely than is possible by restricting it to their own networks or existing syndication deals.

3 – Distribute branded content that is being produced by OTT providers: One of the most important and interesting trends in OTT internet television is that the leading players – Netflix, Amazon for example – are beginning to produce their own content, which is receiving critical acclaim.

Given that such material is already well-regarded by many existing MSO subscribers – and that more and more of this content being produced, then it seems inevitable that a point will be reached where content acquisition executives working for MSOs will start thinking about licensing such content.

4 – Resell branded OTT services, like Netflix: The logical conclusion of the previous ‘item-by-item’ content licensing strategy would be for MSOs to approach Netflix, for example, and try to license the entire Netflix ‘channel’ so that it could be embedded in the MSOs video offering.

We are sure that this idea has been discussed in practically every strategy review in every major MSOs worldwide. The basic concept would be for a MSOs provider to include, for example, a differentiated version of Netflix or Apple TV within an existing or new MSO bundle (which could be marketed as an ‘internet TV’ package).

5 – Launch rival OTT services: MSOs have the opportunity to launch OTT versions of the video elements of their existing MSO offerings, although this requires a very careful approach so as not to self-cannibalise existing subscription revenues.

In summary, the impact of OTT on MSO is a bit like a slow puncture: at first, from the outside, there is no visible sign of a problem but on the inside damage is surely being done as the nail slowly works its way through the rubber until the process of deflation starts.

MSOs have the option to deploy a range of defensive strategies to counter the impact of OTT internet TV but running their video offers on a ‘business as usual’ basis isn’t one of them.

This free research article is based on content included in a major report on Over-The-Top (OTT) Internet Television, which Nakono published in Nov 2015.

See the full report for detailed information of what MSOs can do to minimise the impact of OTT on their core businesses, as well as a wealth of analysis and forecasts on the OTT internet TV market worldwide: Over the Top (OTT) Internet Television: 2015