At today’s Millennial Media digital upfront at Ham Yard Hotel, FrameStore co-founder and chief creative officer Mike McGee demonstrated the amazing advances his company are making in visual effects, from Dobby in the Harry Potter series through to bringing Audrey Hepburn back to the screen in the Galaxy ads. 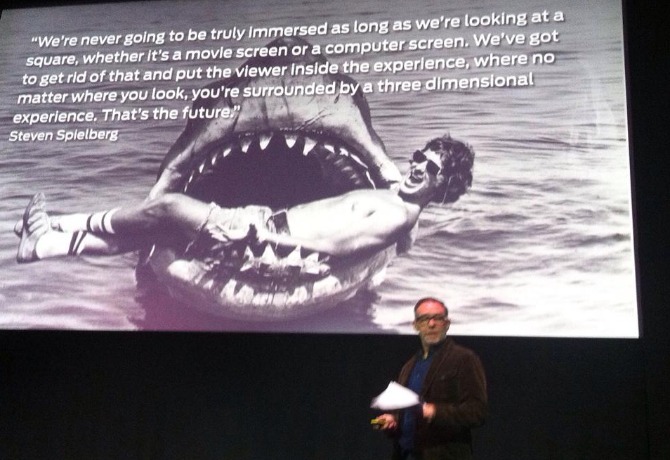 McGee said that the next challenge for the company was virtual and augmented reality, going on to describe the company’s recent Game of Thrones ‘Ascend the Wall’ immersive VR experience which allowed volunteers to enter the elevator in Castle Black and then ascend ‘The Wall’ and see ‘The North’.

Commenting on a video showing extreme reactions to the experience, McGee said “Virtual reality affects you emotionally and physically”.

“It’s a new way of telling stories,” he added, “In the virtual world you are the camera so you don’t tell a linear story in the same way.”

He admitted the company are still learning about giving people choices and multiple endings. “It’s about tricking all of your sense,” he added.

“Perhaps one day you could have tea with Audrey Hepburn.”

McGee described the future of VR as “an unwritten book with huge potential for not just entertainment, but education and medical benefits”.

“We don’t even know where it can go yet,” he added, discussing his excitement for non-linear storytelling. “It means finding new ways of holding people’s attention.”

The tech would allow users to decide where they want to go, which means directors would have to find ways to make the ‘viewer’ turn around – there are no ‘cuts’ in virtual reality, so the prod would come from a sound effect.

“It’s really exciting to work in an area that feels like digital did when we launched our company 30 years ago,” he added. “It feels like we’re at the beginning of a whole new era where we’ll change the way we absorb content, the way we tell stories and the way we experience narrative.”

He felt that AR potentially has an even larger audience than VR “for being able to overlay content as you’re moving, to be able to bring content in to your home environment that means you can replace things like TVs, the fact that I don’t have to carry my laptop anymore because my home screen can be surrounding me”.

“Even the way I memorise where I put things – in my computer, I save a file, two minutes later I’ve forgotten where I put it – in the augmented reality world, you’ll see things you store in a three dimensional way and it’s proven that the way memories works, you are far more efficient in a 3D space so augmented reality can create those 3D spaces.”

McGee ended his presentation with a slide showing Steven Spielberg in Bruce, the animatronic shark from Jaws’ mouth.

The slide read “We’re never going to be truly immersed as long as we’re looking at a square, whether it’s a movie screen or a computer screen. We’ve got to get rid of that and put the viewer inside the experience, where no matter where you look, you’re surrounded by a three dimensional experience. That’s the future.”