However, questions remain as to whether the strong performance of franchise movies like Jurassic World and Star Wars has translated into increased investment from advertisers in what is considered by some as a legacy OOH medium.

The advantages of cinema are obvious. Aside from reaching an engaged audience devoid of distractions, the big screen, powerful sound system and dark room offer a unique opportunity to target customers when they are ready to be connected with and told stories.

In recent years, cinema advertising has become easier to plan and buy with greater flexibility and more affordable rates, not to mention improved sound and picture quality.

Despite this, Vincent Letang, executive vice president of global market intelligence at IPG Mediabrands’ Magna agency, admits that cinema advertising is not top of his company’s effort on a regular basis.

“There is a correlation between cinema advertising sales and box office in the sense that when we, as a media buying organisation, buy cinema campaigns, the cost is guaranteed. We may pay $50 to reach 1,000 viewers in a certain age range category, and they’re guaranteed,” says Letang.

“If the theatres are full, the cinema media vendors [National Cinema Media and Screenvision Media in the US] can reach the agreed number of impressions quickly, and then there is more inventory left for other brands.”

However, Letang feels that, over the past couple of years, in-theatre advertising has become more attractive to TV-heavy brands. This is in part because of vendors beginning to sell upfront in a manner similar to the broadcast industry, and also because it is now easier to buy against the same demographic targets as offered by TV companies.

While there is some evidence of local players taking advantage of cinema’s ability to target specific communities, most cinema advertising is national, with little sign of international deals. The biggest US categories in 2016 were automotive, media, entertainment, snacks and insurance. 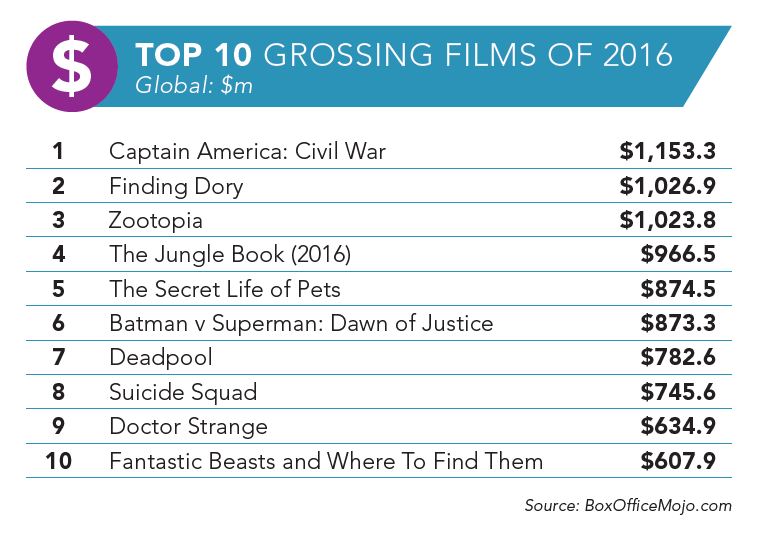 Kantar Media chief research officer Jon Swallen feels that cinema ad sellers in the US have benefited from bringing a wider range of national advertisers, who have larger budgets than local and regional advertisers, as well as charging higher CPMs and selling more inventory.

He says on-screen ads in movie theatres act as an extension of a video-first media strategy, with the added benefits of enhanced geographic targeting capabilities and comparatively low CPMs. Also, in the media and entertainment categories, linear TV networks, streaming video services, casinos and live music events are using cinema to deliver ‘switchpitch’ messages for their offerings.

“The US movie-going audience is skewed towards the millennial generation [nearly 50% of ticket buyers are 18 to 34 years old] and this degree of concentration is scarce within the linear TV market. As a result, the ranks of top-spending cinema advertisers include a number of brands with modest, not large, TV budgets and for whom young adults are a core target market,” says Swallen.

He argues that, in an earlier era, the sales pitches that advertisers received from cinema companies frequently positioned the medium as “not TV” and advised marketers to create ads specifically for the big screen, with a wider variety of lengths, instead of repurposing existing assets.

“That was then, this is now,” says Swallen. “The recent gains cinema has made with national marketers are in part because the medium has made itself more like TV in order to better compete for a share of the fragmenting video ad budget.”

It’s not uncommon for a brand to share ad creatives across TV and cinema. In some cases the same execution will run concurrently on both platforms, while in other situations a brand takes a TV commercial that has been out of rotation from TV airplay and puts it in the theatre, so long as the message strategy still fits in with the current campaign.

The UK’s Digital Cinema Media (DCM) claims that, while 90% of the ads it uses are the same as on TV, 85% of viewers think they are different, misremembering them as longer, with better sound or colour, which is credited to higher engagement.

Sally Dickerson, managing director of Omnicom Media Group’s Benchmarketing, comments that “adding cinema to the mix improves campaign effectiveness across all analysed categories”, while a study in conjunction with DCM demonstrated that, in the UK, advertisers in many sectors, including travel, food, retail and telecoms, are currently under-investing in cinema, reducing the effect of their campaign’s overall ROI.

STABLE IS THE NEW SEXY

Screenvision Media chief strategic development officer John McCauley claims that cinema and movie-going attendance has been remarkably stable and that, in the US, “stable is the new sexy”. He says that, generally speaking, Hollywood studios are much more in tune with the overall impact of the worldwide box office.

“We’ve hit an inflection point in the US where the ratings, particularly the live broadcast ratings, have hit a number or a level and it’s no longer efficient for media planners and buyers to spend as much money on television, because they can’t efficiently get the reach,” he says. “Cinema has very much been a beneficiary of that.”

Although McCauley believes that many would describe cinema as legacy, he feels on some level the perennial nature of movie-going had created a stability that is now an almost unrivalled strength.

“I think five years ago there was a very loyal base of cinema advertising ‘aficionados’ – people really appreciated the nature of the business,” he adds. “Now I think it’s become much more assimilated with agencies and planners where it’s a very considered medium, where there’s scatter money available and people are trying to find that engaged reach.”

McCauley says that branded content is a big factor in cinema advertising in the US, with Screenvision running its own creative studio to make branded content optimised for cinema impact called 40 Foot Solutions.

“They’ll run their branded ad, the ad they came up with, then we think through with them if there’s another way you can have additional impact in our pre-show called Front and Centre,” he explains.

“Branded content is a very big trigger for driving incremental revenue across any publishing platform, but in particular in cinema advertising, considering the scale of the 40-foot screen and the opportunity with the immersive captive audience even raises stakes higher.”

While Screenvision currently operates only in its domestic US market, McCauley feels that this may change as emerging technology breaks down national borders. He also predicts that the future will see new people joining the movie-going fold and an increase in “underdog, independent films” breaking out. “I always cheer for those films and this year I think there will be more.”

DCM chief executive Karen Stacey is insistent that cinema’s core proposition – in contrast with other ‘traditional’ media owners – is getting stronger, with exclusive content, investment in infrastructure and experiential differentiations between chains.

“We’ve got a very strong, undistracted audience, we’ve got fantastic content and you can play your content on a screen that’s 56-feet wide – there’s still a lot to like,” she says. “Even in a recession, cinema does well because it’s people’s treat.”

DCM has been exploring the opportunities that mobile can offer, even when the device is turned off. Experiential campaigns, such as a recent London stunt for Smart Energy GB, can achieve scale through social shares, while companies such as Mobster are utilising retargeting to re-serve brands that have already been featured in pre-roll ads to the audience in cinema foyers, giving twice the interaction of only one serving.

“You’ve got to remember people are there to be entertained,” Stacey adds. “They’re there for a night out, so entertain them, make them laugh.”

Stacey feels that franchise movies are successful, not only in the box office but for advertising partnerships, because there is a known audience and brands are more certain about how the audience will react and how characters will work on screen. She also notes that films with high numbers of pre-booked tickets offer a good indicator of financial success.

“We are very keen to remind people that [cinema is] a great place to start a story,” says Stacey, paraphrasing Bartle Bogle Hegarty founder John Hegarty’s distinction between advertising and promotions.

“‘Advertising is telling a great story and persuading people to do something. Promotion is about finding your target audience and keep talking to them.’ They are different things and we need to go back to telling stories because all that brands are a series of stories.”

Stacey ends by restating cinema’s niche: “We don’t do reach, that’s what telly does, but we do cut through. We do that really well with films. I want to see a return to great brand advertising and storytelling.”

Maybe the superheroes of the silver screen haven’t been so super in 2016 – but 2017 heralds a new hope (pun intended) in the form of the next Star Wars and Marvel instalments. Cinema is a treat, for both audiences and advertisers, and that is not going to change any time soon.