Omnicom Media Group agency OMD has topped the nominations for this year’s M&M Global Awards, ahead of GroupM’s MediaCom and MEC. 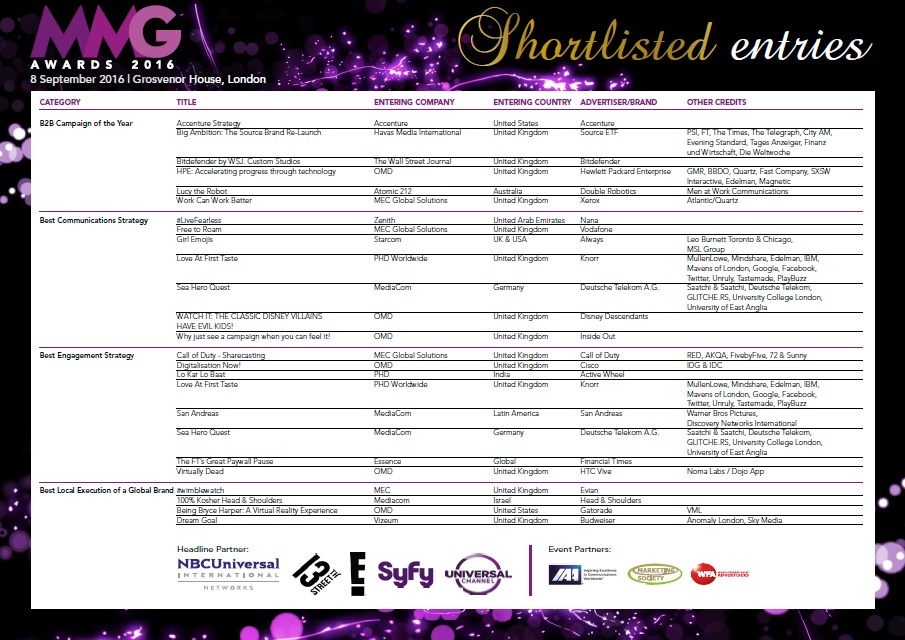 The M&M Global Awards, now in its twenty-seventh year, celebrates the best multi-market media campaigns from around the world.

This year’s shortlist is headed by OMD, with a total of 35 nominations across 16 categories, with MediaCom and MEC in second and third places respectively.

Independent agencies to secure a place on the shortlist include Atomic 212 and LONDON Advertising, while media owners like The Wall Street Journal and Yahoo! EMEA have also made the cut.

The best-performing brands on the shortlist are Double Robotics with the campaign ‘Lucy The Robot’, which ran globally, and Deutsche Telekom with its ‘Sea Hero Quest’ mobile game, which ran in Europe.

Seven new categories were introduced to this year’s awards. These include Best Multiplatform Campaign, Best Use of an Influencer, Innovative Use of a Publishing Platform, Best Creative Use of Technology, Best International Growth Strategy, B2C Campaign of the Year and The Talent Award, reflecting on the ever-changing and multifaceted global media landscape.

The shortlist will be judged by a prestigious jury that includes C-suite executives from Diageo, Hiscox, Jaguar Land Rover, MasterCard, Toyota and Unilever, as well as experts from media owners, agencies and independents.

The winners will be announced at the M&M Global Awards gala dinner event on the evening of 8 September 2016 at London’s Grosvenor House, supported by headline partner NBCUniversal International Networks.

“This year’s awards attracted a record number of entries, underlining the importance of international media and campaign excellence across multiple markets,” said Danielle Redwood, managing director for awards at C Squared. “Only the M&M Global Awards recognise the best in international media, and the gala dinner event promises to be another unforgettable night for the industry.”