The Rugby World Cup 2015 is now over, New Zealand have been crowned champions, and the English are licking their wounds after a humiliating exit. But how was it for brands?

As Beauden Barrett crossed the line for New Zealand’s third try, and secure a 34-17 win over Australia, it brought to a conclusion a memorable Rugby World Cup (RWC).

As an exhibition of elite sport, it was second-to-none. Rugby union purists purred at the all-conquering All Blacks, including a demolition of France in the quarter finals, while the performances of semi-finalists Argentina also raised pulses across the world.

Supporters will not forget the stunning upset in the group phase, when minnows Japan beat two-time RWC-winners South Africa – a result which bodes well for when the tournament arrives in Asia in four years’ time.

The final was watched live by an estimated global audience of 120 million, while over 2.47 million tickets were sold across the 48 matches, and organising body World Rugby highlighted the impact of the tournament across social media channels.

Not everything went to plan

However, not everything went to plan: for European supporters, RWC 2015 little short of a complete disaster.

England became the first host team to crash out in the group phase after ignominious defeats to Wales and Australia, while the remaining Northern Hemisphere sides were dumped out at the quarter-final stage. It marked the first occasion the semi-finals have not featured a single European team.

England’s early exit certainly hampered attempts to gain the attention of a more mainstream audience. Viewing figures in the UK peaked with the 11.6 million that tuned in to ITV to see Wales defeat England, but dwindled thereafter.

Sponsors like O2 and Lucozade had pinned their hopes on a successful tournament for the English – the former ran a campaign showing the England team as giants (see below) – and were forced to change marketing plans midway through the competition.

British newspapers reported empty seats in stadia for key quarter-final and semi-final games, as well as empty fan parks, as neutrals – disappointed by the home team’s performance – tuned out. For many sports marketing experts, RWC 2015 will go down as a “missed opportunity” for both sponsors and the wider game itself.

“For the home nations and for many brands it was over before it got started,” says Ed Kemp, director at Westworth Kemp Events, a long-time expert in rugby events. “With the football World Cup, the nation is engaged from the off, but with the Rugby World Cup it takes time for things to get going due to a narrower supporter base.

“This was a once in a generation opportunity for the sport to engage with people on a mass scale, especially for a sport which can be seen by some as elitist. Unfortunately the performances of the home nations, in particular England, meant the opportunity for sponsors to engage with new fans came and went too soon.”

However, for a sport keen to shake off its reputation as a quirky game played in Britain and its former colonies, RWC 2015 marked a step forward.

When Japan –a hitherto unconquered market for rugby union – hosts the next tournament in 2019, it will do so buoyed by that famous victory over South Africa, and in the knowledge that a record 25 million Japanese viewers tuned in to its match against Samoa.

And, though sponsors like Land Rover, DHL, Heineken and Emirates may have been secretly disappointed by engagement levels in the UK, the international picture is different.

MasterCard’s head of marketing, Western Continental Europe, Guillaume Conteville said the sponsorship had proved a “huge success” from a global perspective: “MasterCard teamed up with the World Cup as it is the biggest sporting event in the calendar in 2015 and that it was never aligned to one country, so the campaign has been a huge success.”

Indeed, a report by PR company Waggener Edstrom Communications claimed that MasterCard had triumphed as the most effective RWC 2015 sponsor with the “right mix of paid promotion or competitions and smart placement of content”. 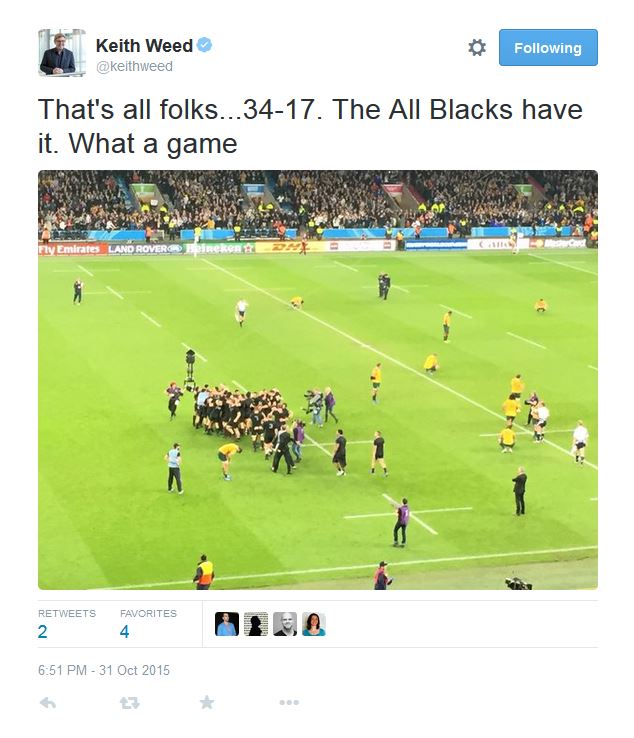 While the tournament may not have succeeded in winning over a legion of British sports fans more interested in soccer et al, it certainly cemented RWC’s place as one of the ‘big three’ global sports occasions, alongside the FIFA World Cup and Olympic Games.

Interest is growing everywhere from the US to Asia, and in four years’ time brands will have another chance to capitalise on its rising potential. And, who knows, maybe England and its European neighbours may have a little more to cheer about as well.