Snapchat and Japanese company Sanrio have extended their relationship to include partnered creative tools, allowing users to decorate Snaps with stickers featuring popular characters from Hello Kitty, My Melody and Chococat. 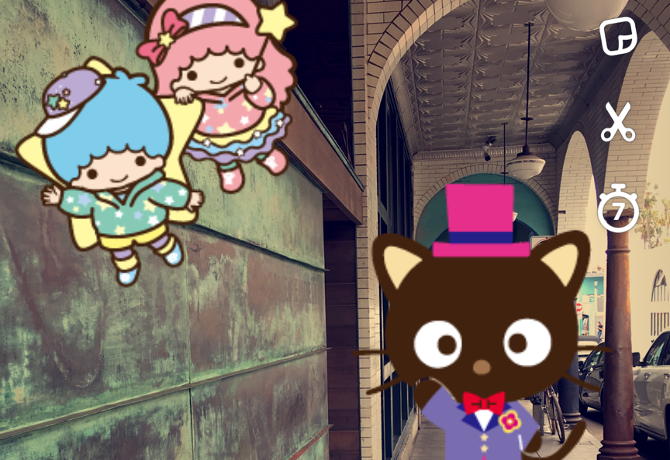 The sticker pack, which will comprise of 30 character stickers and be available for about a month, is the next step in the partnership following their previous Lenses collaborations, and coincides with Sanrio Character Ranking 2017, an annual competition that sees fans vote for their favourite Sanrio character.

This release comes a day after Snapchat revealed a further step away from its ephemeral origins by allowing users to view shared content without a time limit, introducing “limitless snaps” and “looping videos” in the vein of Instagram’s Boomerang function.

Other additions include a ‘magic eraser tool’ allowing users to edit and remove objects and imperfections, as well as a ‘draw with emojis’ tool.

Commenting on the updates, Mediavest|Spark chief executive Rachel Forde said it continued to show Snapchat’s position at the forefront of social innovation.

“These new features extend the longevity of the content people choose and want to share, and the tools they have to curate it,” said Forde. “As the rivalry for ‘user time spent’ between social media channels continues, it becomes even more important to pay close attention to what users want and invest in meeting that.”

“For the media world, a better experience for consumers ultimately means better results for brands. This news gives advertisers reassurance that Snapchat is open to evolving the foundations of its product, remaining one of the top ways to reach a younger audience while competing on more equal level with Facebook.

“It will now be interesting to see how the other platforms respond to these latest developments as the competition for engagement and users continues.”

Snapchat floated on the US stock market earlier this year, having been valued at more than $17bn ahead of its IPO. However, following its first earnings report as a public company, Snap’s shares took an almost 25% dive after reporting a $2.21bn net loss and a 286% growth in revenue to $149.65m, falling short of expectations.

On the first earnings call, chief executive Evan Spiegel countered a question from analystis as to whether he felt threatened by Facebook, and in particular by its new augmented reality camera feature, quipping, “At the end of the day, just because Yahoo has a search box, it doesn’t mean they’re Google.”

“If you want to be a creative company, you’ve got to get comfortable with and basically enjoy the fact that people are going to copy your products if you make great stuff,” he said. “Now I think with Snap, we believe that everyone’s going to develop a camera strategy.”

Commenting on this, Fetch director of social EMEA Kevin Chase said: “Instagram has previously borrowed from Snapchat but now the original ephemeral messaging app is fighting back against Instagram with these new features. It has recognised that if it wants to grow it needs to innovate.”

He continued that Snapchat has taken inspiration from numerous sources, replicating Photoshop’s clone stamp: “I wouldn’t be surprised to see more Photoshop-inspired features following soon, with Facebook and Instagram likely following a similar suit – if the features prove popular.”

Chase said Snapchat has rarely put a foot wrong amongst its core user-base, so the company has been careful to introduce features that won’t rob it of what made it unique in the first place.

“The key to growth is how marketers respond to and utilise this expanded palette,” he concluded. “Facebook will certainly be tracking the success of these new features closely. With that in mind I’m sure Snapchat is already planning and developing the next updates to maintain their position as innovators in the field.”