Sir Martin Sorrell has revealed that WPP’s clients spent $90m with Snapchat in 2016, significantly higher than first projected, and he views the app as a threat to larger rivals like Facebook. 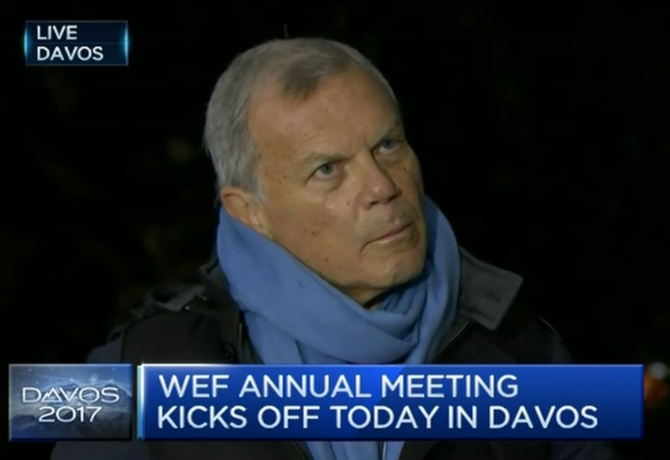 Speaking to CNBC this morning (17 January) at the World Economic Forum in Davos, Switzerland, Sorrell said that WPP had predicted its clients would spend $30m on Snapchat last year, but the final figure was three times as high.

As a result, he predicts Snapchat’s revenue is likely to be higher than the $350m reported by several sources, and offers a major threat to Facebook’s dominance of the market.

“It does become a threatening alternative to Facebook and I think that’s the big opportunity for them,” said Sorrell.

“We know Facebook have tried to buy Snapchat a couple of times, we know that they’ve made product changes as a result of Snapchat’s products. I think Facebook is concerned about the potential opposition.”

With this year’s World Economic Forum starting today, Sorrell admitted the global elites meeting in the Davos “bubble” had failed to predict the possibility of Brexit and Donald Trump’s election.

However, he insisted WPP was well-positioned to cope with the “swings” and “roundabouts” of a Trump presidency: “[Trump] will be good for the US economy. Infrastructural spending, reduction of tax, pulling back money from overseas.

And Sorrell reiterated his concerns about the UK’s forthcoming exit from the European Union, stating he remains “extremely worried” by WPP’s ability to maintain a “really strong position” in Europe, particularly in the context of the devaluation of sterling.