SoundCloud is looking to carve out a share of the growing music streaming business with the European launch of premium subscription and free, ad-funded services. 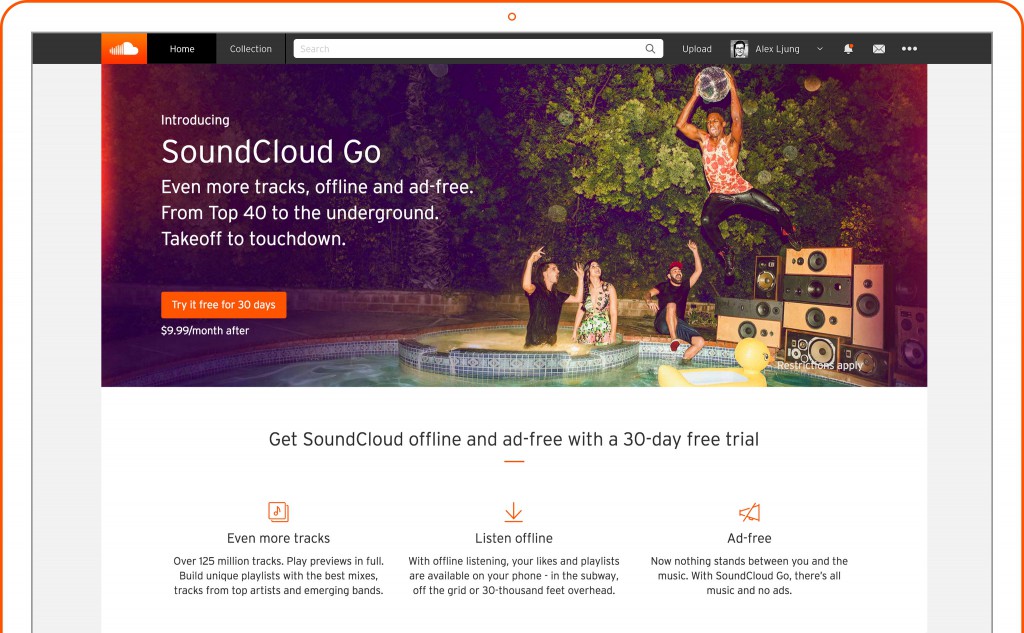 The audio platform, which has 175 million monthly users, is introducing advertising to its free service, alongside a new subscription package called SoundCloud Go costing £9.99 per month.

As well as being ad-free, the ‘Go’ premium service will allow free access to content from record labels including Sony, Universal Music Group and Warner, plus additional offline playback benefits.

The two-tier model rolls out today (3 May) in the UK and Ireland, with advertising sales – both direct and programmatic – handled by Global’s Digital Audio Exchange (Dax). Squarespace and TuneCore have been named as the first brand partners in Europe.

Previous brands to partner with the platform for native deals include Jaguar, Microsoft and Heineken, while advertisers on its free service include Pepsi, Amazon and Netflix.

Former Capital FM ad sales boss David Couch has joined as SoundCloud’s regional head of sales, with responsibility for managing brand partnerships and ad sales across the UK and Ireland, and for appointing and managing the growing UK sales team.

Launched in 2008 in Sweden by Alexander Ljung and Eric Wahlforss, and now headquartered in Berlin, SoundCloud first announced plans to monetise its platform two years ago, first introducing ads to its US service in 2014.

Meeting with M&M Global in London last week, Moore told us that, “with respect” to established audio streaming rivals like Spotify and Apple, SoundCloud offered a uniquely credible music platform and an opportunity to target early-adopting Millennial consumers.

“Brands are looking for these consumers – young, Millennial and mobile,” said Moore, who describes herself as “pleasantly very happy” with initial demand in the US. “Our users want to discover the undiscovered. For these people it is a badge of honour to find artists first, and that is a sweet spot for advertisers.”

Moore argues that audio advertising is enjoying a return to relevance, proved by the success of platforms like Spotify and Pandora – with whom she claims SoundCloud has only “small duplication” in audience.

And she insists there is room for SoundCloud to attract enough subscribers and advertisers, despite its relative late entry into the market: “There is clearly a desire to stream. Now we have a product to satisfy.

“I don’t think it is too late [to launch]. Streaming is a burgeoning category. With respect to Spotify and Apple, we have a unique product, and consumer choice is never a bad thing. It is just starting,” she added.