As Sony, Microsoft and Facebook draw up the battle-lines for virtual reality headgear, Jez Jowett, global head of creative technology at Havas Media Group, looks at how Google Cardboard’s tie-up with Star Wars is bringing virtual world exploration to a whole new generation of film fans. 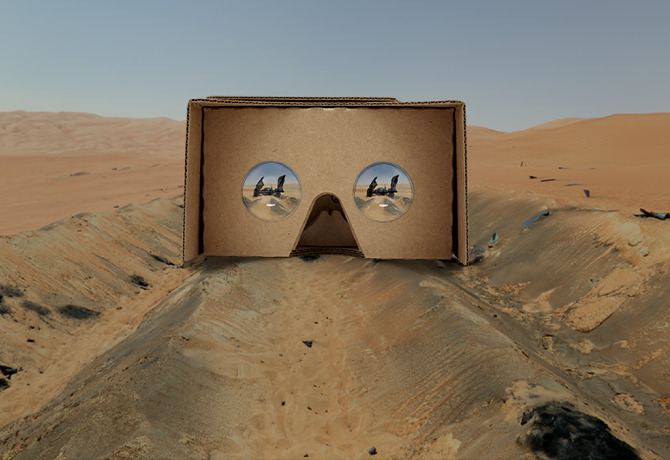 The force is growing ever stronger around virtual reality (VR). Next year, Sony’s Project Morpheus and Facebook’s Oculus Rift will both go head to head in the ultimate battle of the VR headset. For those of us itching to experience virtual world exploration now however, Google and Star Wars – the answer they do have.

To coincide with the release this week of Star Wars: The Force Awakens, a Google Cardboard Virtual Reality experience called Jakku Spy has been launched within the official Star Wars app, available on both iOS and Android devices.

Created by ILMxLAB – Lucasfilm’s laboratory for immersive entertainment, Jakku Spy enables the old guard like myself, as well as a whole new generation of fans, to navigate our way through nine scenes starting with the desert planet of Jakku. It’s here we catch sight of the Millennium Falcon being chased by enemy craft and get to interact with a BB-8 droid.

This introduction to the future of mainstream VR is great news for film fans looking for more immersive experiences, while giving gamers a glimpse of how the not-to-distant future will look for VR headset gaming. There’s already Jedi Academy, which is Oculus Rift compatible.

ILMxLAB, is also reportedly working with other Disney filmmakers to create bespoke VR content, which could have significant ramifications for Disney’s theme parks, hotels and cruise liners.

Just as Walt Disney himself introduced the world to feature-length animation in the 1930s, his successors are now among the first to hand-hold us into this new VR medium so that our human perceptual systems may begin to grow comfortable with virtual inputs that create mind-blowing effects.

After all, this is the only way that VR headset gaming will properly take-off – if there’s a buying audience that already feels safe and familiar with exploring virtual worlds, and then desires the added thrill of shooting things or embarking on a quest.

The VR battle lines are not only being drawn around immersive content and gameplay, however. The appeal of the headwear itself will also play a major part in who will win what is expected to be an epic battle for market share.

Morpheus also comes with all the experience of Sony’s gaming culture including an integrated microphone and 3D audio, to allow for immersive multiplayer gaming. It’s certainly sleeker and lighter on the face than its rivals and a quick-release button makes it easy to get on and off.

As for controls, Sony’s PlayStation controllers are already spatially aware but thanks to Oculus’ tie-up with Windows 10, every Rift will come with a wireless Xbox One controller.

I guess this almost guarantees who will own which of these two devices, dependent on the hardware they already own and where their console brand loyalties already lie.

So what about the others? Will the popularity of holographic Minecraft be enough to secure the success of Microsoft’s HoloLens? Will the HTC Vive become the Jar Jar Binks of virtual headgear?

The Vive’s main advantage should have been to beat both of its nearest competitors out of the gate with a November 2015 launch.

It didn’t happen though and the Vive now won’t launch until 2016, which could seriously damage its chances for success. Samsung’s Gear VR meanwhile has launched a consumer edition in both the US and UK. Here, it’s available for as little as £80 ($121), as long as you have a Samsung smartphone and the 360-degree launch content is pretty cool.

“Virtual reality gaming won’t be about competitive killing or highest scores. It’ll be about the kind of exploration we’re starting to see now with VR film experiences”

Still, the Vive will eventually feature the highest image resolution out of all the available choices and it is still the only headset to include position tracking via two base stations that will track your physical movement over a 15sqft area.

This will enable you to get up, walk around and, providing you don’t stub your toe on the coffee table, interact with the virtual world in real-time.

Personally, I’m more looking forward to banking my Millennium Falcon with a tilt of my head, entering into PlayStation worlds without injury or nausea and watching my kids’ heads explode as an entire Minecraft holographic world rises into view from a table-top.

You see, to me, virtual reality gaming, when it arrives, won’t be about competitive killing or highest scores. It’ll be about the kind of exploration we’re starting to see now with VR film experiences – to boldly go and have a scout around make believe worlds, where only movie stars have gone before.

If future new Disney worlds worth exploring include the deck of Captain Jack Sparrow’s Black Pearl, the landscapes of TomorrowLand or the Train of Thought in Inside Out, then sign me up now. In the short-term, I’ll settle for the next eight Jakku Spy landscapes and see where the force takes me next.