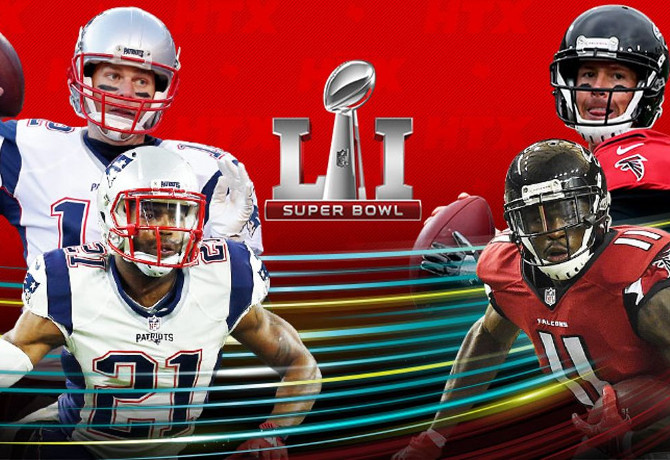 With less than a week to go until the National Football League’s (NFL) showpiece finale, the Super Bowl LI, there is no doubting the power of the event as a conduit to US audiences.

The 2015 showdown between New England Patriots and Seattle Seahawks remains the most-watched event in US TV history, with 114.4 million people tuning in. And while last year’s fiftieth Super Bowl fell slightly short – a mere 111.9 million viewers – it remains an unrivalled opportunity for brands to reach more than a third of the country’s population in a single hit.

Ever since Budweiser’s ‘Frogs’ commercial stole the show during 1995’s Super Bowl XXIX (watch below), those outside the US have become ever-more aware of the blockbuster brand marketing launching on the first Sunday of February. Super Bowl ad viewership on YouTube is up 25 times since 2008. In 2016, the top three ads generated around five million minutes of watch time.

However, and unlike gold-plated global sports events like the FIFA World Cup and Olympic Games (both measure audiences in billions rather than millions), American gridiron football has failed to draw significant audiences outside of North America – until now.

The estimated 40 million non-US viewers tuning in to recent Super Bowl broadcasts may sound modest, but is a rapid improvement on the two million international viewership estimated by media agency Initiative as recently as 2005. It is reflective of the NFL’s ambitious plan to transform the sport into a truly international spectacle, driven by engagement on digital channels.

With many advertisers – including Dentsu Aegis Network chief strategy officer Sanjay Nazerali – bemoaning the lack of global media properties through which to spread their messages, is it time to re-evaluate the international value of a Super Bowl spot?

According to YouTube data, after the US, the Super Bowl resonates most strongly in the UK, followed by Canada, Russia, Germany and France.

Consider for a moment that the UK is one of the most competitive sports markets in the world, with association football, rugby, motor racing, cricket, tennis, boxing and cycling among those enjoying sizeable followings.

In spite of this, the NFL has managed to carve out a growing niche, in part thanks to the ‘International Series’ of fixtures played at Wembley Stadium – the home of English soccer – since 2007. There is even talk of a launching a London-based NFL franchise, and developing a significant footprint across Europe.

The recent rise to prominence is not the first occasion the NFL has found fortune on British shores: a regular terrestrial TV broadcast slot in the 1980s made household names of players such as William ‘Refrigerator’ Perry, and some four million UK viewers watched the 1986 Super Bowl.

However, NFL UK head of marketing Sarah Swanson is confident that its current popularity can be sustained and improved upon: “People love sport and there is room for lots of them. We can be really successful as a second, third, fourth sport for lots of people. With the digital and social media world, there are so many ways to get to people.”

Swanson adds that NFL’s continued push to play games in Europe, and to draft European players, will help develop the sport’s international fandom and media coverage.

With Fox reportedly charging advertisers as much as $5m for a 30-second spot during the Super Bowl broadcast, there is pressure on brands to ensure a memorable campaign.

It has resulted in a rush of celebrity appearances: this year alone, stars such as Justin Timberlake, Melissa McCarthy and DJ Khaled will feature in ads, while famed filmmakers the Coen brothers have been recruited to direct Mercedez-Benz’ latest Super Bowl spot (see above). Snickers has also snatched the headlines with its decision to run the first ‘live’ Super Bowl commercial, featuring up-and-coming Hollywood star Adam Driver.

“It’s one of the biggest global advertising moments of the year, when new creatives launch around the world and big campaigns break”

“[The Super Bowl] is absolutely an international media and marketing moment. Part of the fervour that captures international audiences are the Super Bowl ads: this is a time where people can see how brands are flexing their creative muscle to resonate with various audiences through these creative spots and campaigns,” he says.

“It’s one of the biggest global advertising moments of the year, when new creatives launch around the world and big campaigns break. Ad-land waits with bated breath for the ads to land. And as platforms like YouTube give brands global reach, the international scale keeps growing.”

Shai argues that the Super Bowl represents an ideal platform for a global campaign launch, not least through the growing online audience for such content – a sentiment echoed by Jaguar Land Rover’s head of advertising Ian Armstrong, who unveiled Jaguar’s ‘Villain’s concept to Super Bowl viewers in 2014.

Wix.com debuted its own commercial (see below) on social media, using YouTube Live and Facebook Live to create a moment in the all-important weeks leading up to the contest. Chris Cardew, head of strategy at GroupM agency Mindshare, agrees that technology has added an international dimension to ‘Super Bowl Sunday’.

“The biggest shift is obviously in social and online video. As platforms such as Facebook and Twitter now offer video streaming of either official or user generated content, there is no longer a need to be sat in front of the widescreen TV with a box of Budweiser to enjoy the game,” says Cardew.

“Global news platforms such as Twitter will enable fans to stay up to date through its Explore offering, and growing platforms such as Snapchat will likely provide highlights through their publishing partnerships with the likes of BuzzFeed and Sky News.”

For Dan Wilson, head of data at Fetch, the potential for mobile engagement around the Super Bowl is something advertisers to explore further: “With eye-wateringly high ad slots and diminished viewer attention spans, brands should turn their focus towards mobile.

Of course, as much as digital and social media allows 24-hours engagement, with fans able to find clips and highlights on Facebook and Twitter at all times, the international impact of Super Bowl is compromised by its anti-social broadcast time outside of the US.

NFL fans in the UK must wait until 11:30pm before the game starts; for the rest of Europe it kicks off after midnight. Those wanting to follow the Super Bowl in much of Asia-Pacific must do so from their office desks on Monday morning.

While NFL UK’s Swanson is at pains to point out that other games begin at much more sociable hours in Europe, she admits the kick-off time is a problem: “There is definitely a perception that all of our games are on in the middle of the night. We fight pretty hard against that. In this day and age, you don’t have to watch full games to be a fan. With highlights online, with social media, with being able to follow players and teams, you can get all the action and not feel you’ve missed anything.

“I think I’d make it to half time if I [watched from the UK]. Globally, we need everyone to be able to take Monday off and enjoy the Super Bowl – that would really be the answer!” she jokes.

Even Sky, one of the broadcasters of the Super Bowl in the UK, acknowledges that an ad broadcast in the middle of the night will have minimal impact, unless accompanied with a comprehensive digital strategy that engages with the footage fans have just seen on their TV screens.

“While American Football continues to grow its following in the UK, the impact is just not the same,” says Duncan Wynn, director of sales at Sky Media. “In an advertising sense, the Super Bowl is a key example of the perfect combination of live and event TV. This event TV needs to be watched live, you want to watch it with others and you want to watch in on the biggest screen in the house.

Another distinction advertisers should draw when considering international Super Bowl audiences is absence of casual viewers and ‘cult’ passion of those staying up late, argues Steve Cording, head of sponsorship at UK newspaper publisher ESI Media.

“Although the NFL does not have the same cut through in the UK – having to compete with football and rugby – it’s definitely a growth area and in terms of what advertisers can achieve, the opportunities are endless,” says Cording, who oversees sponsorship activity on the Independent and London Evening Standard brands.

“There is definitely less engagement outside of the US, but that is because the interest is unparalleled in terms of one country being gripped by a single event of that nature. In the US, brands are able to use the Super Bowl to speak to consumers who wouldn’t normally watch the NFL, whereas globally the opportunity lies more with sports fans.”

However, as global audiences grow, and the international viewership switches from local broadcast networks to live digital streams, advertisers will be able to reinvent the classic Super Bowl spot for global audiences, says Swanson.

“For the foreseeable future, Super Bowl is a linear broadcast television play in the US. That said, who knows what that will mean internationally, in five or 10 years,” she says.

“I think if the sport continues to grow, those rights are going to become more valuable, and the ad space will become more valuable. Whether that is linear TV or some kind of digital streaming, who knows? But I think there is a real history and association with the ads. It doesn’t matter what world that exists in. I would like to think that those things will stay together internationally.”

And what of the biggest question of all – who will emerge victorious of the New England Patriots and Atlanta Falcons?

“I can’t say who is going to win! I just hope it’s a good game with lots of scoring – that always helps internationally,” says Swanson.