A Women’s Aid survey has found that 41% of respondents’ partners or ex-partners used their online activities to track them. 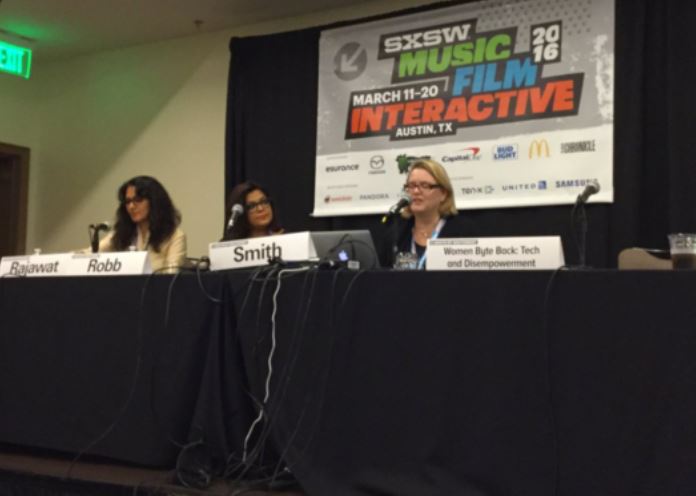 Statistics like this were peppered throughout the Women Byte Back: Tech and Disempowerment panel at SXSW (many of which were taken from J. Walter Thompson’s own proprietary research, part of its Female Tribes initiative) which aimed to shine a light on how technology can be a force for disempowerment as well as force for good.

Some of the stats such as, “One in three women feel that tech is made for men by men,” and, “One in four Brazilian women cite seeing a female role model on screen as the reason for finding the strength to leave an abusive relationship,” brought audible gasps from the audience.

With panellist Chhavi Rajawat, the first female Sarpanch (Mayor) with a business degree in her village in India, there was a particular focus on the developing world. She told stories about how she has been trying to get her village connected to the internet so she can help give her constituents a voice and access to learning.

Dawn Smith, the chair of the panel and JWT’s digital development director, talked about the difficulty they had faced in even trying to get hold of Rajawat to organise the panel due to India having internet blackout days – seems hard to imagine.

But it’s a much more important issue than simply being able to check Facebook. As Google’s Nishma Robb, the other panellist pointed out, when it instigated its Internet Saathi scheme (a mobile internet station that travels to villages twice a week for six months to allowing people to get online).

“We had no idea what their first question would be when being opened up to a world of information, and most of them were things like, ‘How can rear my cattle better?’. Issues that would make their life better,” said Robb.

Rajawat added: “Woman are the ones that do everything. They do the work outside, working the fields. Men have no qualms with admitting to the fact that they are lazy, but they don’t allow women the freedom.

“We have to make sure that the men don’t feel threatened. I have to tell the girls that while they are learning to speak up they have to be sensitive to the men and the structure they have grown up in. When I’m around I know the women are safe but I’m not always going to be around.”

Robb added: “At Google we are looking at how we empower women – it was interesting to see how that made men feel. There was a feeling that they were disempowered. We need to keep reassuring men that empowering women it doesn’t mean disempowering men. In actual fact it helps them and their families.” 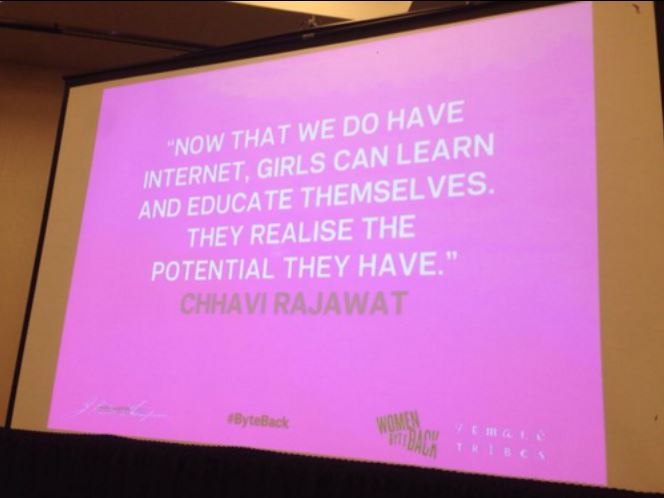 In the developed world, the issue is more around not having enough women creators. According to JWT’s research 70% of women think that there aren’t enough women in tech.

And for Robb this is a huge problem, which is why she heads up Women@Google. Inspiring and exciting women about roles in STEM.

A key part of this is making sure women and girls have strong inspiring role models to look up to. Robb said: “Children make their gender assumptions as early as six or seven. With a twin boy and girl I have my own AB test.”

Smith pointed out that recent research from J. Walter Thompson in conjunction with the Geena Davis Institute backs up the importance of role models as a societal issues showing that one in four women in Brazil (one in 10 globally) had found the courage to leave an abusive relationship because of on-screen role models.

Chhavi herself talked of being a role model and having girls from other villages calling her or texting her asking her to speak to their parents to allow them to stay in college and saying they now wanted to try and emulate her move to politics.

The panel finished with Smith asking Rajawat what she needed to help her project. “You’re sitting next to Google in a room full of tech people. What do you want? What can help?

This resulted in a woman who has a team of coders and designers in India offer to help Rajawat with the work she is doing once the village gets fully connected to the internet, something she said will happen at the end of the month after five years of her trying.