Tata Motors has picked up the coveted Grand Prix at last night’s 2017 World Media Awards for its campaign, by Maxus Global, which saw it change the name of its Zica vehicle. 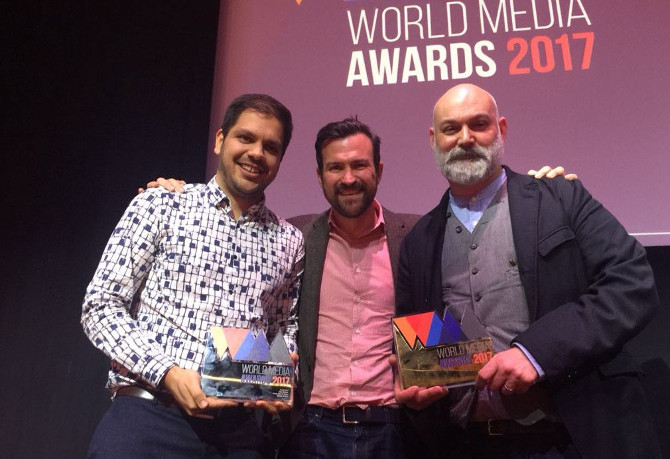 The entry – called ‘From Zica to Tiago’ – impressed the judges with its rapid response to the outbreak of the Zika virus, and its successful crowdsourcing of a replacement name for the Indian car-maker’s latest model.

Jury co-chair Raquel Bubar, director of T Brand Studio International at The New York Times, praised the “smart and effective” response to an unforeseen challenge, just weeks before the car was due to launch.

“A very nimble reaction that achieved great results, this was deemed particularly impressive in the automotive sector which can often be regarded as slow and formulaic. To turn such a potentially huge financial and reputational loss into a successful story was regarded as a terrific achievement,” she added.

Speaking to M&M Global after collecting the awards, Maxus worldwide head of planning Nick Vale (pictured above, far right) said: “It’s rare that you come across a genuinely apocalyptic challenge in our business. To have something which is so fundamentally problematic with the way you sell the product to an audience, and to decide not to turn your back on it, and instead to embrace the challenge […] is something we are incredibly proud of, and also incredibly proud it worked.

“At its heart there is a genuine insight into the way memory works: if you have been party to creating something, you are going to remember it. The solution wasn’t just to create a new name for ourselves and blast it out there, but to invite people to create the name for themselves. We couldn’t have done it five years ago, but social and digital media allows us to really play with those tools,” he added.