M&M: How are advertisers in China adopting content marketing methods to connect and engage consumers?

Chang: “The main aim for brands today is to convert individuals into brand supporters. The use of celebrities and influencers is bracketed under the term ‘key opinion leaders’ (KOLs), and this is a common approach in China. Many B2C brand campaigns use KOLs to spearhead their campaigns, but the fit between both sides has to be natural.

“Michael Jordan visited Shanghai last October, and we saw a great opportunity to run a full content marketing campaign alongside this. This took the form of a multi-platform event that created content via live streaming. The show drew a huge audience for an in-depth interview with Jordan and a famous Chinese sports commentator. To complement this, we put together a retrospective of the basketball megastar’s career highlights alongside a series of interviews with home grown, Chinese sports stars including Liu Xiang and Li Na. This gave more opportunities to engage with the audience.

“The result from this was that more than 2.2 million people watched the interview with Jordan. Around 58% of the users are 24 years old or younger; this represents an audience that can be very difficult to reach otherwise, so the marketing impact from this was high. The other lesson that we learnt from this is that Michael Jordan’s influence within the Chinese market continues to be enormous to this day.”

How does this differ from the content approach seen in other parts of Asia and Western markets?

“China has a very different model for both the content creation markets and around content marketing. For example, the top five for box office movies based on gross ticket sales in China is dominated by local movies. The Fast and The Furious is the only international movie in the top five.

“The channels used to reach the audiences are also very different, with Chinese social media channels and websites dominating the sector compared to international companies. The strength of the local social and online video sector means that there’s more emphasis on the creativity and interconnected nature of content campaigns within one ecosystem, rather than being spread over multiple channels that don’t join up with each other. For brands, the market in China demands content that looks and feels local.”

What styles and formats of content are most successful in China?

“Brand activity around Chinese New Year is a great example of innovation around new channels. Traditionally, lucky money is given in red paper envelopes at Chinese New Year. Replicating this online as part of social channels first took place two years ago, and was adopted phenomenally quickly.

“Some 180 million users got 182 million red packets by shaking their mobile phones on Chinese New Year’s Eve. Brands have adopted this approach themselves to support the cultural event as well as creating more opportunities to interact with customers.

“Alongside this cultural event, mobile marketing and e-commerce has developed far quicker in China than in other countries. Whereas mobile marketing elsewhere tends to focus on awareness for luxury brands, here in China the customer journey can be fully mobile.

“Mercedes-Benz ran a campaign on the QQ messaging app for exclusive GLA pre-ordering. On the basis of precision targeting at young adults, Mercedes-Benz completed a closed loop campaign that included mass exposure via social media and mobile display advertising with mobile payment support. After just 10 days of the pre-ordering period, this marketing campaign achieved results that were far ahead of expectations.

“Views on the website pages reached close to 50 million in that 10 day period, while tens of thousands of test drive applications were received. More than 2,000 people paid 999 yuan online to pre-order a car through their social account. What is worth mentioning is that these sales leads were acquired for one-sixth of the average for the luxury automobile industry.”

Has this move to content marketing been prompted by the media viewing habits of young, millennial consumers in China?

“In China, young consumers have become the main force on the Internet. The group born between 1980 and 1990 is no longer the key online consumption group. For those born after 1990, mobile Internet access drives their consumption of media as well as their awareness and purchase behaviour.

“It’s also important to state that web users in China have a vast appetite for digital content. The sheer range of activities performed by more than 50% of Internet users is long. It includes streaming films, streaming live TV programming, accessing online news, streaming music and reading digital books. There are so many options available for entertainment or information. Marketing in this environment is more challenging, as the competition for attention is much higher than it used to be before the advent of mobile Internet.”

What other methods are brands in China using to engage those young consumers?

“Co-creation of content between companies has become a distinct trend. For brands, this kind of commitment represents a long-term opportunity to engage consumers and change opinions.

“For example, nutrition company Mead Johnson supported the development of a new series aimed at new mothers that would provide them with educational materials and insights. Over 10 million people online were involved in investigating what topics should be covered and this led to the show’s creation.

“This is a generation that values their activities more, pays more attention to niche and indie culture, and is more willing to spend over online and mobile channels”

“The leading expert locally Dr Wei was joined by baby development experts that could help mothers with their problems and provide advice. Six celebrities and eight Key Opinion Leaders discussed various interesting topics prompted by the audience research. Alongside the series, the company also developed its own baby health white paper that could promote its activities and its products further.

“This approach helped the company move from being perceived solely as a brand of baby milk to becoming seen as a company that cares about babies, mums and families.”

How do those young people differ from those of the same age elsewhere in Asia/globally?

“I’d say that members of the post-90s generation are considered to be ‘digital natives’. They never experienced life before the Internet and all the services that can be delivered over it. This is a generation that values their activities more, pays more attention to niche and indie culture, and is more willing to spend over online and mobile channels. At the same time, they are pickier in terms of what they buy, as they have so many options open to them. What’s most noteworthy is that this number of post-90s generation ‘netizens’ is close to 200 million, accounting for one third of China’s total online users.”

How are brands in China preparing for the upcoming Olympic Games? Will it be a big marketing moment in China?

“Brands have already started their campaigns around this year’s Olympics in an effort to be associated with the prestige of the event. At the technical level, there will be opportunities for brands to take innovative approaches like Virtual Reality to further enhance users’ experience as spectators.

“We are joining in on this with our ‘Run to Rio’ campaign to promote users’ participation in the Olympic Games. Running lovers can sign up for the game under their own name, or team up with others to participate. WeRun is a step counter and activity tracker built into WeChat, so those that sign up can track their exercise every day and then exchange this for points. The aim of the game is to start from Beijing, travel across the 20 host cities of the Olympic Games and 14 stages of competition, and get to Rio as the final destination.

“Based on existing activities such as liking posts and ranking items, ‘Run to Rio’ will also include more specific interactive activities such as Friend Radar quizzes, Torch Relays and dedicated sections on Olympic champions. Linking these activities together will allows users to meet more like-minded partners in the ‘Run to Rio’ process. Our aim is to get people excited about the Olympics as well as encouraging more social networking and exercise.” 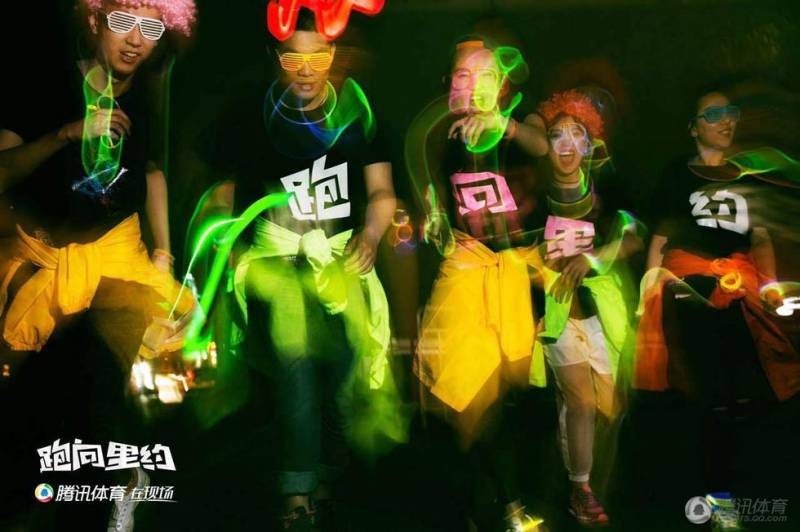 Is it possible to estimate how much brands will spend around the Olympics?

“‘Run to Rio’ is one of our key creative campaigns and it has already secured sponsors such as Audi and Yili, a local dairy brand. In total, the advertising budget across all sponsors for ‘Go Rio’ now exceeds 100 million RMB Yuan.

“Looking more widely, spending on marketing around the Olympics will be substantial as brands look to build their own creative, collaborate with other like-minded organisations on cross-selling campaigns and look at co-creation of content with publishers to entertain and raise awareness. The brands involved want to support associations with positive events and winning, as well as supporting people to get more active.”

How has Olympic-related marketing evolved since the 2012 Games, and the Beijing Olympics in 2008?

“Compared with 2012, there’s been a greater movement towards mobile and social platforms for marketing. As part of this, more and more advertisers prefer campaign ideas that integrate online and offline activities together into wider customer journeys.

“China’s love of campaigns with KOLs includes those that use sports stars. The availability of celebrities can play a critical role in influencing advertisers’ budget investment. One Korean brand chose to work on a co-creation initiative to develop original programming made for online video channels as it allowed the brand to get the specific sports star that they wanted to feature. This ability to target consumers based on celebrity and star appeal can be compelling to audiences.

“One big change from four years ago is that single company or siloed title sponsorship around a channel or programme is not longer attractive for advertisers. Instead, more and more advertisers have decided to go down the route of content marketing and either collaborate with other partners, or with a publishing company that can bring their own audience into the content creation process.”