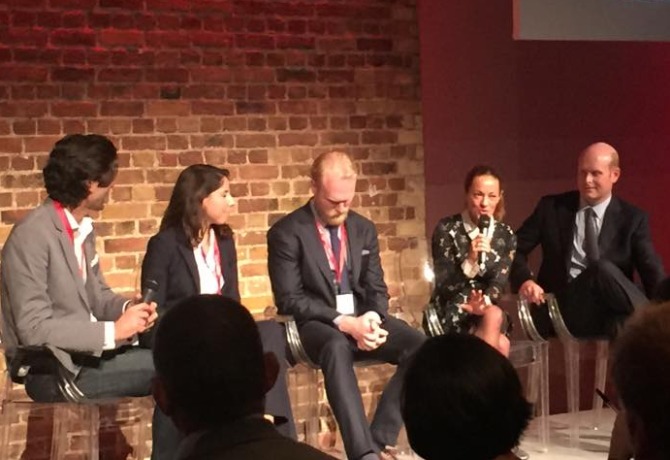 Guardian Labs managing director Anna Watkins felt that her company is very black and white about the differentiation, maintaining “very strict divisions between what we call church and state”. She went on to say that although she believes in editorial independence, she thinks that branded content, when done correctly, can work incredibly well but that a merger was not on the table.

Capgemini global head of content Parker Ward said there was a deficit from the consumer marketing side, which was seen in abundance from publisher level.

“Storytelling can become a bit of a cliché but we try to think of it as solving a business problem,” said Aon senior vice president global marketing and communications Andy Weitz. He felt the key was in distilling complex business challenges down to stories people can relate to and trying to build platforms to help with that.

The Economist brand communications manager Holly Donahue said her company had been working with brands for a very long time through sponsored third party research, but it was only in recent years a content marketing department had been set up.

“That was a huge change for us,” Donahue said. “The challenge now is how do we distribute that.” She went on to discuss how brands could connect with millennials and reach the Economist’s 11 million-strong Twitter audience.

Transparency is the key

Watkins said that the key to a successful campaign is transparency in order to maintain trust and not “hoodwinking” the consumer, which can lead to a severe backlash on the brand. She said that her company is thought of as “the number one most trusted news brand” and it achieved this by using separate editorial teams whilst still maintaining a high calibre of content.

Weitz felt it was important to create more value than you capture. “It’s a mind-set shift, which takes an enormous amount of patience and education to get there,” he said.

“We’ve reorganised our team and restructured our third party spend from pitching to publishing,” Weitz added.

Watkins felt that a huge part of where the industry is shifting is through data, allowing understanding of audience insight and content consumption. ”It enables us to optimise in real time on and off platforms and feedback, so we have very clear metrics.”

The role of agencies

Ward felt that agencies “have an issue” but that there’s “always going to be a need for good advice and strong communications”, although he speculated that adverts wouldn’t be going anywhere any time soon. He went on to talk about the importance of generating lots of blogs, “getting the machine pumping”, before you are able to spot trends.

According to Weitz, the role of agencies is going to continue to shift.

“A lot of people have moved to content marketing to say that they can do it differently,” he said, speculating on the pros and cons of outsourcing writing.  “Agencies are going to have to continue to reinvent themselves.”

“I think it would be suicide if we tried to cut out the media agencies,” Watkins said, continuing to discuss how her company had won a lot of long term media partnerships by going hand in hand.

Weitz felt content marketing was a new way to package thought leadership, with his company shifting a large portion of third party spend to building “the content marketing engine”. “It now becomes a question of value over time,” he added.

With over 50% of Guardian Lab’s audience now being mobile, Watkins said “For us, it’s not a question, it’s an absolute imperative that the solutions we are providing are mobile and video first”.

Donahue said her company is constantly looking at data and ROI, always tracking and remarketing to make sure nothing is wasted and using tech to make sure content reaches the right people.

The panel closed with opinions on whether journalists make the best content marketers. Weitz said the point was “to make consumers look like rockstars by sharing a piece of content”.