Twitter is testing a new interactive ad format which encourages the public to retweet brand messages organically to their followers. 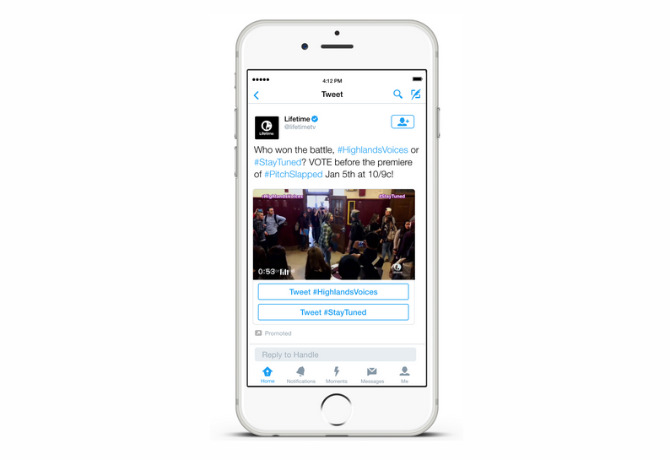 According to the Twitter blog, the ads, which look similar to the interactive polls that the platform recently introduced, generate a pre-written message which can be edited, including a hashtag and photo or video when the user interacts with a branded hashtag button.

The aim of the format seems to be to initiate conversations relating to brands, utilising influencer marketing in a cost-effective way, potentially bypassing agencies through targeting digital and traditional celebrities. This builds on research showing that organic conversation about a brand delivers significant value for advertisers.

“We are thrilled to join forces with Twitter as a partner to launch the conversational video tool for the upcoming premiere of our new series, ‘Pitch Slapped’ on January 5th,” said Lifetime director of social strategy Marissa Vinciguerra.

“The Tweet features voting buttons encouraging fans to engage with our creative and is a perfect match for this campaign.”

Depending upon the selected objective, brands would only pay for video or photo views from the original ad, not the shared ad, unless tweet engagement is selected as the aim.

“For many years, marketers have successfully increased their brand engagement using Promoted Tweets with compelling images or videos and campaign hashtags that drive Retweets, likes, and follows,” said the Twitter blog.  “Conversational ads take this a step further by including call to action buttons with customisable hashtags that encourage consumer engagement.”

Twitter is also rumoured to be opening up to longer conversations with the introduction of 10,000 character tweets, following a tweet by chief executive officer Jack Dorsey: