Why are we all so interested in the US election campaign? Petra Malenicka, senior vice president, Western Europe and the Americas, advertising sales at CNN International, offers an explanation.

It’s a subject that just about everyone I know has an opinion on – in client meetings, the person sitting next to me on a flight, even in conversations with my children, people are talking about the race for the White House that seems to be shaping up to be Trump vs Clinton.

The US presidential election – which still has a long way to run, by the way – has captivated a wide range of people that I come into contact with and clearly is engaging audiences in the US as we see CNN’s domestic network breaking records in the TV ratings and digital traffic. But beyond my own anecdotal experience, how relevant and important is the story to international audiences?

Interest and importance of the US election

As a company that bases its output and decision-making on facts rather than hunches, we decided to commission research to understand how the world views and is following one of the biggest stories of 2016.

Research company Toluna assessed the viewing habits and opinions of almost adults in 23 countries across Europe, Middle East, Africa, Latin America and Asia Pacific, plus Canada, in a study that comprised almost 5,000 interviews. The findings show a level of interest in the US election that even surprised me: 85% of people view the election as important for the world at large, with 73% of respondents saying they are personally interested in US election news.

The top reasons that people state as why they are interested in the US election are: importance for the world at large (68%); importance for their country (47%); potential to affect individuals economically (38%); insight into the US political system (35%); shows how Americans view the world (34%); and the personalities of the competing  candidates (33%).

The last point interested me. For all of the talk that it’s the so-called ‘Trump effect’ that is driving interest in the election, ‘personalities’ is only the sixth most popular reason listed by international audiences. Asked why they think the US election is important to the world at large – respondents say it is due to America’s significance to the global economy (64%); implications for international relations (63%); the US’ role in global security and counter-terrorism (57%); trade prospects and potential for a shift to more hardline US foreign policy (both 43%).

It’s clear that people around the world see this as an important juncture in the US’s relationship with the rest of the world. 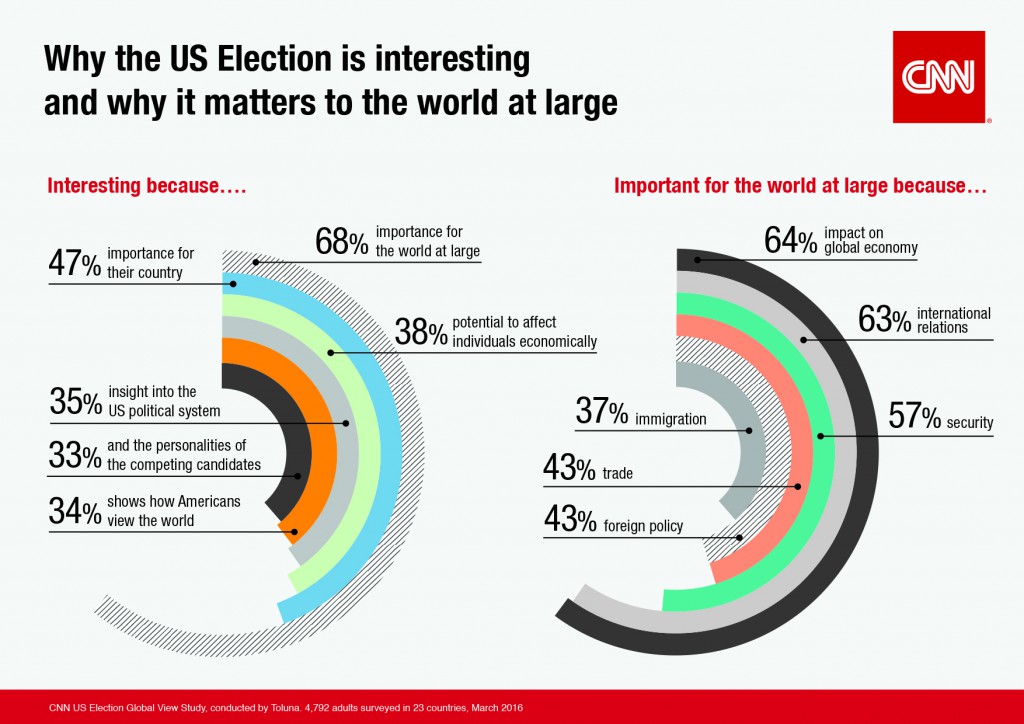 Of course, as well as finding out what the world is interested in about the US election, it was important for us to know how they are following the story through international media.

This area of the study is pretty comprehensive, I’m pleased to say. Selected by 51% of all respondents as the number one international news provider for following the US election, CNN has a figure higher than all other news organisations combined. The closest competitors are the BBC (19%), Reuters (5%) and Sky News (4%).

Let’s be honest, if there was any single news media organisation you’d expect to own this story, you’d probably say CNN.

However, it was important for us to have this confirmed by independent research because there are few certainties in the modern media landscape where there is such a cluttered environment and competition for eyeballs and attention.

Also interesting is the finding about media consumption by platform. The majority of people getting their news fix about the US election are doing so through CNN International’s linear channel – 50% say they consume via TV, 31% on the CNN website, 14% on social media and 8% via the CNN app. Despite the naysayers, TV is alive and well – albeit with a healthy mix of digital thrown in. 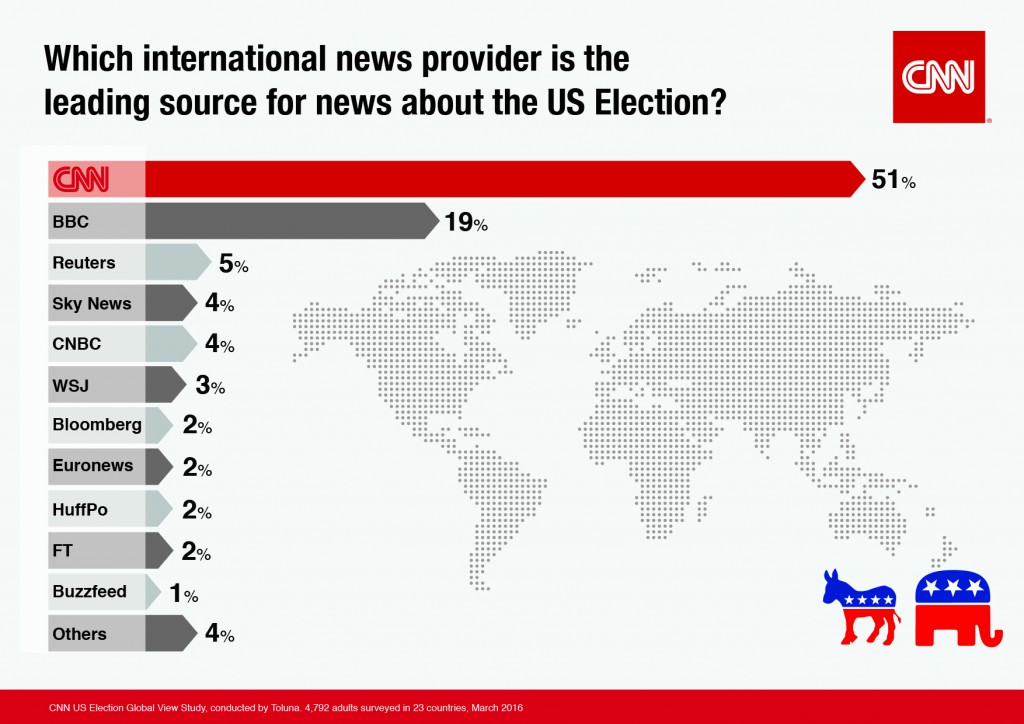 Takeaways for media owners and marketers

This study is a powerful tool that, for the first time in this election cycle, gives marketers and media owners a quantitative assessment of how engaged the world is in the US election.

It’s often said that money follows audiences, and indeed that’s what media owners and advertisers are now empowered to do with our editorial and marketing strategies. As a news organisation we now have tangible evidence about the real thirst for news about the election – in fact we have a new nightly show called State of the Race starting on CNN International next week – and my advice to pan-regional advertisers is always to be part of the world’s conversation.

Whatever your politics, whatever the result come November, the US election is something that can’t be ignored as the world watches with intense interest.