As digital media consumption accelerates across Mexico, marketers have been quick to take advantage of a range of new and exciting technologies to add new dimensions to their marketing campaigns in real-time, while at the same time staying true to local cultures and traditions.

According to figures provided by Statista, digital advertising spend for Mexico in 2019 is $3.1bn (+12.2% year-on-year), driven largely by advertising spend in social media. And while traditional media formats remain popular in Mexico, digital consumption is rising at a high rate as more and more consumers turn to digital.

Mexico was the most highly represented country on this year’s Festival of Media LatAm Awards 2019 shortlist accounting for 24.6% of the total shortlisted entries. Furthermore, it went on to achieve a 50% success rate, winning 17 of the 73 Gold, Silver and Bronze trophies awarded during the awards ceremony in Miami (23.3%).

Perhaps as expected, following a similar trend to last year [see Festival Intelligence: Alcohol brands lead Mexico’s charge to digital], the Food & Beverages sector performed extremely well in this market accounting for 71% of all the winning entries from Mexico. But as we have focused on some of these entries before [see also Festival Intelligence: Keeping up traditions with a modern twist in LatAm from this year], we took a look at some of the other entries and categories to uncover what other trends we can take away from this market.

The most popular category was ‘Best Integrated Campaign’ – where all three Gold, Silver and Bronze trophies were awarded to work from Mexico. In addition, Mexico also performed well in the ‘Best Campaign for a Local Brand’, ‘Best of Central America’, ‘Best Use of Real-time Marketing’ and ‘The Effectiveness Award’ categories – winning at least two of the top three trophies.

In addition to Food & Beverages, there were winning campaigns from the Entertainment, Retail and FMCG brand sectors. Across all the entries, there was a strong influence from new digital technologies to create campaigns that really stood out and made an impact.

Real-time marketing played a significant role in a number of campaigns but it was interesting to see the different methods and purposes in which it was used. By linking with sports and leisure activities, brands achieved greater engagement with locals – either by tapping into their passions or providing a service that, ultimately, changed behaviour from a safety aspect, all the while increasing sales.

Of course data played a strong role in this, ranging from specialised weather forecasts to social media trends monitoring, which enabled dynamic creative based on what was happening elsewhere. And digital out-of-home was selected as a key media platform from which to share these messages.

Marketing has moved on from simply being a method to sell products and more and more brands are giving something back to consumers and achieving a greater purpose. We see this in the Mexican entries whereby brands are connecting with audiences in real-time, adapting their message based on external factors, and exploring with new technologies to create authentic and relevant communications.

We put the spotlight on two Festival of Media LatAm Awards 2019 winning entries from Mexico, which highlight this trend: 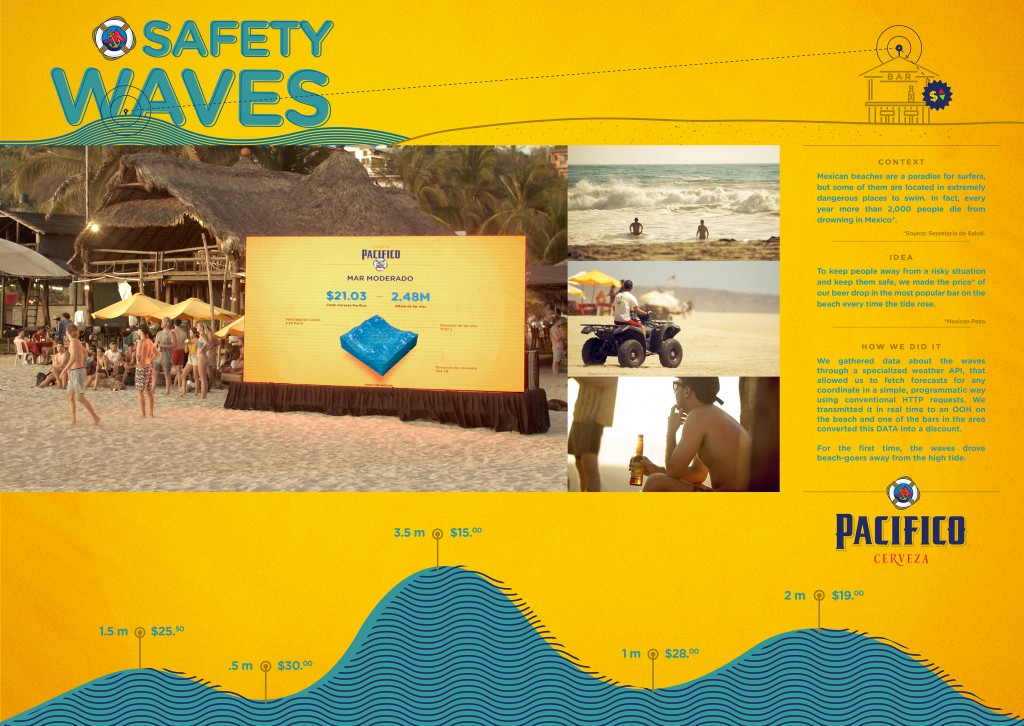 More than 2,000 people drown in Mexico every year. That’s more than 5 people a day. The Pacific Ocean, the largest body of water on the planet, surrounds the 7,146-kilometer coast of Mexico. And although Mexican beaches are a paradise for surfers, because they have very high waves, they are also a great danger for the majority of people who also do not pay much attention to the danger signs. Nobody acknowledges the warning signs at the beach. Cerveza Pacífico, a beer that actually was born on the coasts of the Pacific Ocean in 1890, felt a sense of responsibility to protect people on Mexican beaches. What’s the best way to combat an issue? Prevention! It would protect people by keeping them on land when it was too dangerous to go in the water.

It wanted to raise awareness among tourists about the dangers of swimming when the tide is high. And it would do this by incentivizing them to stay on the beach. The strategy: The higher the tide, the cheaper the Pacífico beers. The agency identified a stretch of the beach where the risk of fatality was highest. There, it installed unique technology to measure the strength and danger of the waves off the shoreline. And integrated this data into a giant, purpose-built digital out-of-home screen, the content of which was shared throughout the most popular bars in the area. So, when the data showed high tide was coming, and it wanted people to stay out of the water, people could see the size of the waves going up and the price of beer going down in real time, and people flocked to the bars.

Mixing real-time marketing and new technology, it created a never-before-seen media execution that kept people from drowning. The agency gathered data about the waves through a specialised weather API that allowed it to fetch forecasts for any coordinates in a simple, programmatic way using conventional HTTP requests. This provided real-time data of high tides and dangerous waves. This was an experience that changed behaviour in one of the most dangerous places to swim. 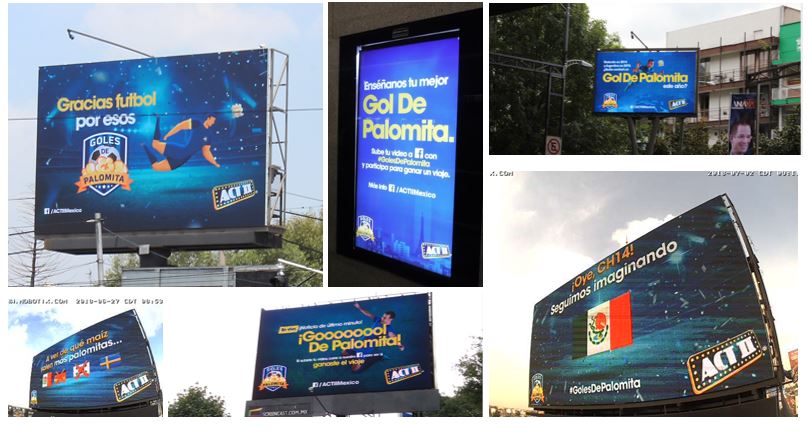 Shortlisted for: Best Use of Real-time Marketing (SILVER WINNER)

One of the moments in which most snacks are consumed is watching sports, where 78% of people preferred salty snacks. This allowed ACT II an opportunity to diversify moments of consumption habits. So, the 2018 Soccer World Cup (SWC), was its main opportunity. One of the main sports events for Mexicans, 78% of the population (18+) are soccer followers and when the Mexican national team plays, the followers grow up to 90% even though Mexico has not reached beyond the fifth match since 1986. Also, 68% declared they watched the games on digital platforms and look for information to be updated while working.

While other brands sponsored the SWC, ACT II took ownership of one of the most iconic movements in soccer “Goles de Palomita” (Popcorn Goal – literal translation of “palomita”) as the main concept for the 2018 SWC campaign giving it the advantage to leverage this great event. World Cups are one of the sports events with more sponsors and a lot of media spend is used to impact viewers. So, in order to be relevant and expand popcorn consumption occasions (beyond movies) on Mexicans by selecting a new brand territory, the agency decided to use a digital field as the main touchpoint to maximise the budget. Digital helped it take advantage since all the matches were in the morning and most of the people were at work, school or on the streets moving to another place, which would allow it to give them information in real-time.

It was the first time that ACT II carried out a campaign of this style, where the main objective was to communicate to Mexico in an original way when a “Gol de Palomita” happened, which allowed users to participate in a promotion to win a trip to the country who scored the goal, sponsored by the brand. Its stadium was the whole country, so the agency selected mainly the most relevant digital media for Mexicans such as Digital Out of Home (DOOH) and Social Media. In order to generate engagement with the audience on Social Media, it created a War Room with an -Expert Football Soccer Team- that generated real-time content related to all the matches of the World Cup.