Forbes Media chief product officer Lewis DVorkin explains why the “church and state” separation between commercial and editorial is a nonsense, and why transparency is key.

If you want numbers, you have come to the right place. Forbes Media is able to produce many of the kinds of statistics used to verify that tricky transition from print to digital-first publisher.

Since beginning its digital transformation in 2010, Forbes has increased its online audience from 15 million to 48 million, more than half of which are mobile-only content consumers. It has grown its social following, too, up 62% and 68% on LinkedIn and Instagram respectively between March and September of this year.

The publisher is looking to expand its presence in Asia Pacific with the addition of a new Hong-Kong-based reporting team, and has partnered with 360BusinessMedia to launch a French-language digital platform ahead of next year’s presidential election. Live events and a print magazine will follow in 2017.

It is also expanding into the world of podcasts, having partnered with PodcastOne to pursue its ambition of launching up to 10 Forbes-branded audio strands by the end of 2017, incorporating topics from women in business to under-30s.

Yet, despite the continued growth, Forbes’ chief product officer Lewis DVorkin is far from satisfied. Instead, he tells M&M Global that the publisher is gearing up for its second publishing overhaul of the decade: “We now have pretty much half our audience mobile-only. We’ve spent the last six to nine months grappling with that and what that means.

“We made the leap from a print business to a desktop business. Now we need to make the leap to a mobile business.”

DVorkin – a former journalist with The Wall Street Journal and Newsweek – is proposing the end of the post as “default” digital journalism.

Forbes is investing in a new content management system (CMS) to allow the creation of a multitude of different content formats, including videos, photos, graphics and quotes. “The notion is ‘publish once, publish everywhere’, in the appropriate format for that social platform,” he adds.

To display this vision in action, Forbes is trialling a series of its famous list features within Progressive Web Apps (see below – or click here on a mobile device). Users can swipe up, down, left and right on ‘cards’ displaying text, images and video about a subject, and ‘flip’ to reveal hidden additional content. Early tests are showing positive results: the average user views 25 cards and spends around seven minutes within the app, “triple” the duration spent within the previous method of presenting this content.

“Sheer numbers are nice, but I see us starting to look at how we segment our audience”

It is having an impact on the way Forbes sells ads, too, with experimentation into time-based advertising and changes to the ways it segments its audience. “Visitor numbers are important, but I have to tell you – and I’m guilty of this – we make a big deal of our audience. It’s great. But you need to monetise that audience, and in, some cases on the phone, monetising becomes less about the size of that audience and more about the engagement,” says DVorkin.

“Sheer numbers are nice, but I see us starting to look at how we segment our audience [on mobile]. We’ve got a segment that consumes career content, one that loves innovation, one that does taxes. Then we need to figure out how to monetise segments, and that monetisation for careers is different to taxes and technology.” 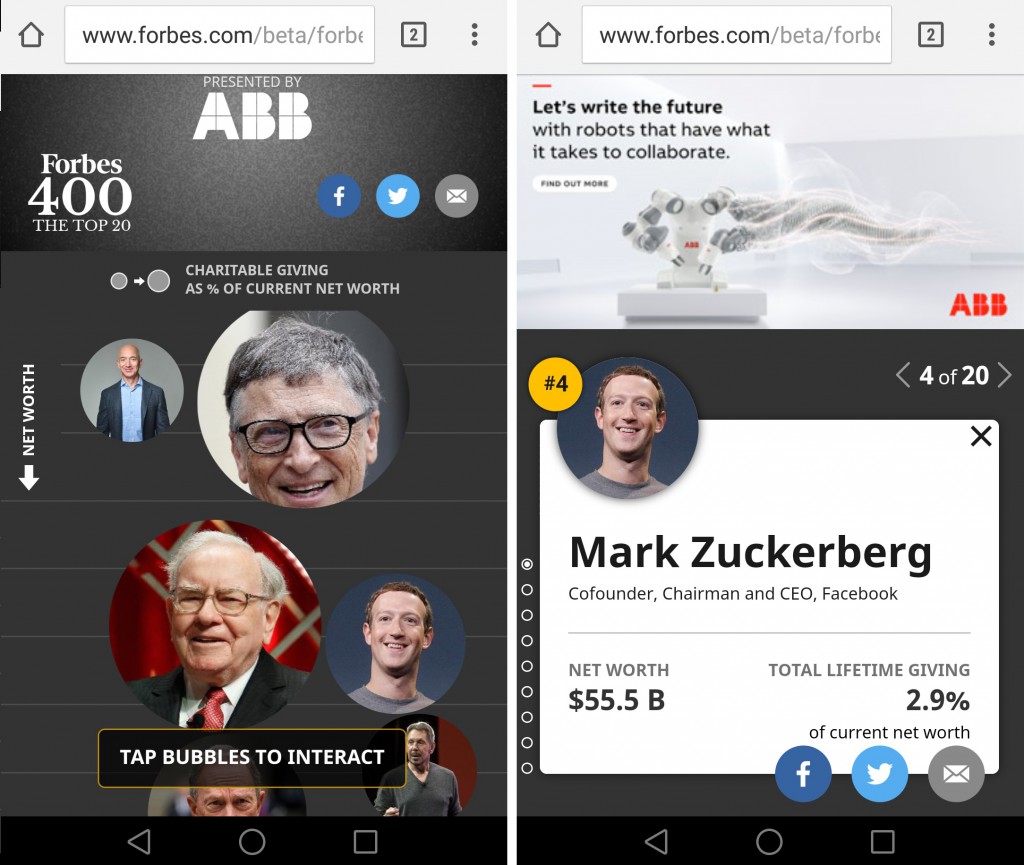 Forbes was one of the first major international publishers to back native advertising with its BrandVoice offering, and in 2015 began allowing brands to gate-crash its print magazine front cover. Now DVorkin argues it is time to go beyond the “separate but equal” status of editorial and brand content, and introduce a new phase of “co-storytelling”.

“We were leaders in native advertising six years ago. People screamed at us and told us we were ruining Forbes. Editors around the industry said they would do it over their dead bodies, and six years later they are alive but they did it anyway,” he says. “What we are talking about now is taking both of those [editorial and commercial content] and putting them all on one page.”

This new method will see editorial staffers collaborating with BrandVoice content creators on major reports, with native ads woven into the same product. Recent examples saw Dom Perignon feature within a report into the purchasing habits of billionaires, and insurer Northwestern Mutual integrate into an in-depth study into self-made women.

Forbes is looking to build a team of individuals to “straddle the line” and coordinate both parts of the business. However, DVorkin is dismissive of the notion that such practices are compromising the sanctity of its editorial.

“There is no such thing as church and state anymore – I call it transparency. The church and state was a façade to make people feel better about themselves. Twenty years ago, when you had a page or a department, why do you think that department was there? Because the advertiser wanted an ad to put next to a page. If there was no ad, there would be no department! End of story,” he says.

“Transparency is key. No one can buy their way into a Forbes editorial story, you can’t do that. You can buy your placement, but you can’t dictate what that content is going to be.”

The ‘challenge’ posed by walled-gardens

Social networks have proved a vital method for building audiences – Forbes is reportedly the most-shared site on LinkedIn, with just under one million shares in October – but pose a revenue challenge, given the less-than-generous settlements some platforms offer publishers in exchange for their content.

“I’m proceeding in a rather radical fashion. I don’t know that Forbes.com is around in 10 years”

While DVorkin is reluctant to describe Forbes’ relationship with social media sites as “tense”, he does concede they provide a “challenge” to traditional content creators. And, having witnessed the rise and fall of AOL in the 2000s close-hand, he warns that unforeseen troubles may be lurking around the corner.

“I’m old, so I’ve seen a lot. They are building walled gardens, and I worked for the original walled garden, called AOL. It didn’t work out so well, so I don’t know how this is going to work for them. But, in the meantime, we need to do all the things to play ball in their world, and that’s what we’re doing,” he says.

“I’m proceeding in a rather radical fashion. I don’t know that Forbes.com is around in 10 years, but I know Forbes will be around in 10 years. It may be a library. We understand that, and we are creating a system that takes that into account. Then how do we monetise Forbes on those platforms? We’re working through that and we have some ideas. But they are in their infancy right now.”