The new Star Wars movie, Star Wars: The Force Awakens, comes out tomorrow (17 December). To piggy-back on the hysteria, here is our list of the top brands who have done just that. Cashing in, they are. 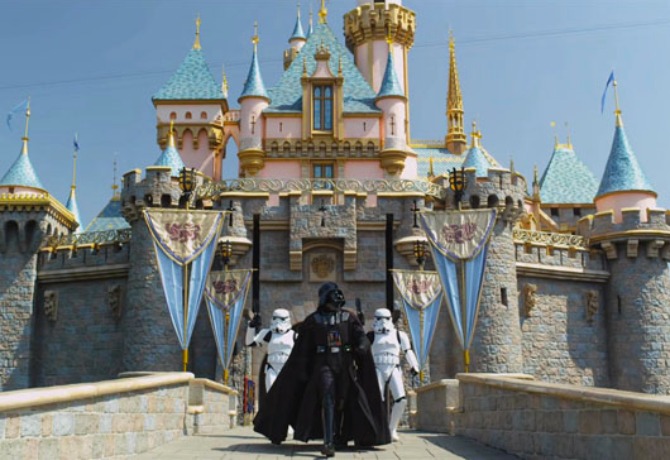 Following on from Lego Movie’s battle of the Kraggle, this ad pokes fun at adults who like to keep toys in mint condition and (bizarrely) hoard boxes of mac ’n’ cheese.

Star Wars isn’t just for boys. Parents can force their childhood passions upon offspring of either gender, as this ad demonstrates.

Because what’s more romantic than a trash can on wheels offering you cinema tickets?

Just part of an ongoing saga which sees a group of unmonitored children running in fear from armed gunmen in the name of Christmas cheer.

As you might have seen, the Church of England had their video of the Lord’s Prayer blocked from being shown before the new Star Wars movie. A vicar and his young flock decided to retaliate with their own version – only to have it banned by Sony Music. But don’t worry, you can watch it here:

What better way to sell sporting goods than to reimagine the famous cantina scene with Snoop Dog getting snippy with an extra-terrestrial boozehound?

3.  Verizon: A better network as explained by Star Wars

Imagine you were stuck in a tight spot with your favourite comedy sidekicks, and your only (new) hope (badoom and indeed tish) to escape those pesky Stormtroopers is for the wireless to speed up…

It must really suck for your movie to come out at the same time as The Force Awakens. To counter this and lampoon poe-faced behind-the-scenes Star Wars footage, Sisters stars Amy Poehler and Tina Fey created the #youcanseethemboth hashtag and this spoof video.

House of Mouse has triumphed with its viral video featuring everyone’s favourite Sith lord attempting to ride the new Star Tours attraction. Anyone who has ever queued at Disneyland feels his pain.

But this list is just scratching the surface. Brands have been using Star Wars to boost awareness of their products for decades. Here is one of the more tenuous examples, for Hagaramo Sea Chicken – featuring some seriously catchy beats and knock-off costumes.