Teads Studio chief executive Emi Gal spoke to delegates at Festival of Media Global 2017 in Rome about how AI is influencing the future of advertising. 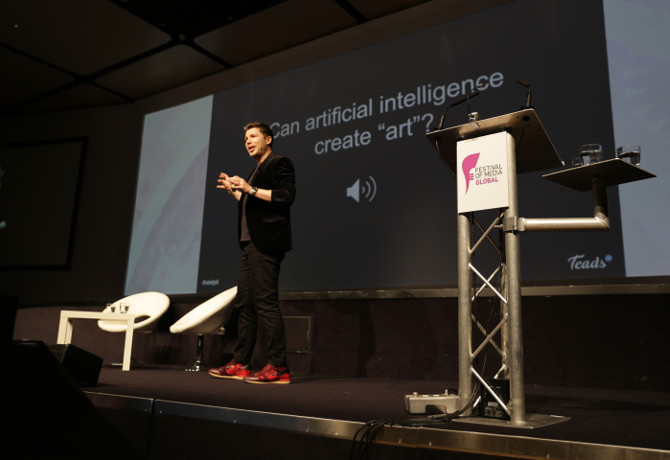 Gal started with a speedy retrospect of advertising from the first radio ad in 1922 through the first TV ad in 1941, the first banner ad with a 44% click-through rate in 1994, to 2005’s YouTube video revolution and finally, Teads launching its Outstream product in 2011.

While he said that ads have become more “beautiful” and targeted, the ads of the future will be more interactive, adapted to mobile, data driven and conversational.

He added that data is currently not being used to its full potential to personalise creative and create a full 360 degree profile based on real time data from a DMP.

Gal recommended taking the one-way form of video and turning it into an interactive experience to sell a product by taking a chatbot interaction and integrating it into an ad.

All AI is brought together by its ability to learn, have access to data and be cost effective, which Gal feels has really taken momentum over the past few years due to deep learning which attempts to replicate how the human brain works by recognising patterns.

First the AI looks at edges, then it takes the edges and tries to combine them to be something more, with the end result being the ability to recognise faces.

“Computers are now better than humans at recognising objects in images and videos,” said Gal, discussing Moore’s law that the number of transistors on a chip doubles every 18 to 24 months. “By 2025, it should be able to make as many computations as humans.”

Looking at whether computers can create abstract art, Gal showed musical and visual examples to show that creativity is possible.

He concluded that, in order to move forward, the industry needs to invest in a data strategy and a DMP, as well as read more – preferably The Innovators Dilemma by Clayton Christensen, The Circle by Dave Eggers and Superintelligence by Nick Bolstrom.