It might have one of the highest digital penetration rates across the LatAm region but marketers in Argentina are turning to traditional media such as out-of-home (OOH) to make bold statements and take a stand on a range of real-world issues.

According to Statista, advertising spend in Argentina was $992m in 2018 and is predicted to reach $1.232bn this year. And although internet user penetration is one of the highest across the region (85% in 2019 predicted to reach 94% by 2023), traditional media – including TV, print, OOH and radio – continues to have enormous influence on consumer behaviour.

At the Festival of Media LatAm Awards 2019, Argentina was one of the best performing countries by winners with 25% of Gold, Silver and Bronze trophies awarded (second only to Brazil at 26%). In total, a range of agencies across the country including Initiative, MediaCom, Adsmovil, Forward Argentina, MSix, HOY and YPF took home five Gold, seven Silver and six Bronze between them.

The most popular brand sector was FMCG, representing 33% of the Argentinian winners, followed by Food & Beverages, Finance & Insurance, Media & Entertainment – each with 17% each. Brands in the Fashion & Beauty and Energy sectors were also awarded.

Festival of Media LatAm Awards 2019 judge Evelin Thesing, Marketing & Interactive Manager for American Express, said (of the LatAm region as a whole): “It’s interesting to see how thinking in terms of media use and brand requirements and creative is put all together within the execution of a campaign… It’s important to see throughout the region how different countries are moving around the sense of communication, use of media and the use of messages.”

From reality TV series and branded documentaries to social media campaigns, similar to many of the campaigns awarded across the LatAm region the Argentinian entries had a strong focus on purpose and creating campaigns that got behind a cause that would ultimately have a strong impact on society.

One of the most popular media of choice in Argentina was OOH and ambient media, used in a way that would make a real impact. Campaigns tackled a range of issues including addressing the gender gap when it comes to household chores, road safety and efforts towards reducing city pollution. Digital techniques were often used in conjunction to help amplify the message and work in real-time to ensure content was relevant to consumers.

OOH, working closely in conjunction with a range of other channels, has the power to make a real impact with consumers. From high impact large format displays to digital OOH and storytelling through ambient media, marketers can still connect with consumers in new and exciting ways, while doing their part in supporting a worthy cause that puts consumers and their needs at the core.

As Eric Tourtel, Senior Vice President Latin America for Teads, another one of the Festival of Media LatAm Awards judges, sums up: “To be honest, right now, especially over the last year or year and a half, I’ve seen brands doing more for the people than governments. More and more I can see advertisers make our lives better, literally.”

We put the spotlight on two Festival of Media LatAm Awards 2019 winning entries, which highlight this trend: 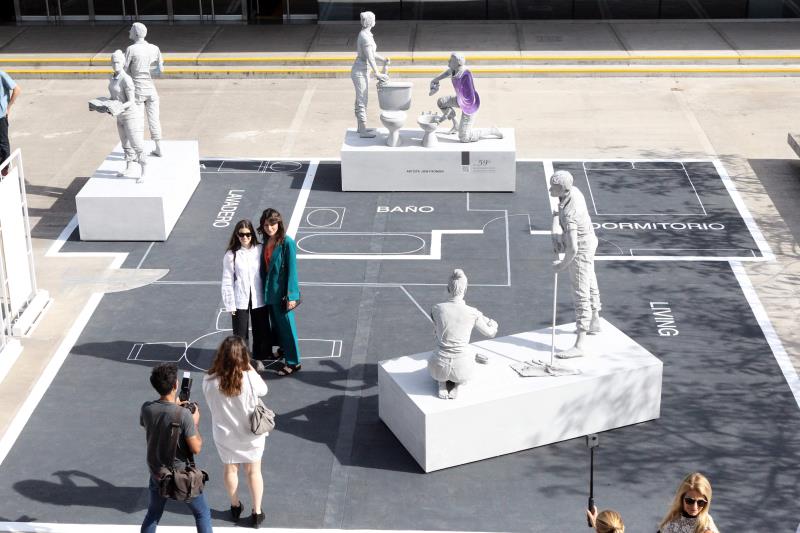 Shortlisted for: Best Use of Ambient Media (SILVER WINNER)

Gender inequality is a hot topic in Argentina, every aspect of life is taken in public scrutiny to assess the gender gap. Household chores have become very visible regarding this matter. And Ayudín being a brand identified with household chores, had the need to be part of this conversation. In Argentina, household chores were always assigned to women. Therefore, with the purpose of building more equitable homes, it worked on a campaign that sought above all to raise awareness about the gender gap in household cleaning tasks.

Ayudín, a cleaning brand in LATAM, decided to base its campaign on a Global Home Index report in 2017 and start in Argentina, as Argentinians are the ones that invest more hours in household chores. Thus, added to the fact that gender equality is an agenda issue nowadays. It decided to give its message through “unfinished monuments” that showed how still 50% of women dedicate more time that men in cleaning tasks. These “monuments” would be structures representing different household chores scenes, and in all of them you could see a complete body of a woman and an incomplete body of a man showing that men collaborate in cleaning tasks significantly less than women. The brand wanted to be part of the conversation in society. The home chores are perceived, in big part, as women’s responsibility. So, it decided to portray that inclusion more clearly and highlighted the beliefs and perceptions rooted in society.

To conceptualise the brand’s intention in addressing the issue, the agency invited Jowy Román, an emerging artist in constant search and exploration of textures and materials and attentive to the conversation around gender issues, to represent with her art a sensitive man and help create conscience that the responsibilities of the home eco-system must be shared equally. The proposal: “Almost a monument” sought to highlight the absent side of man in home chores and break the gap. For its part, the communication work was organized in three stages that allowed the theme to get in agenda, promote participation and enhance the amplification of a message that would soon become a topic of conversation due to its cultural relevance. 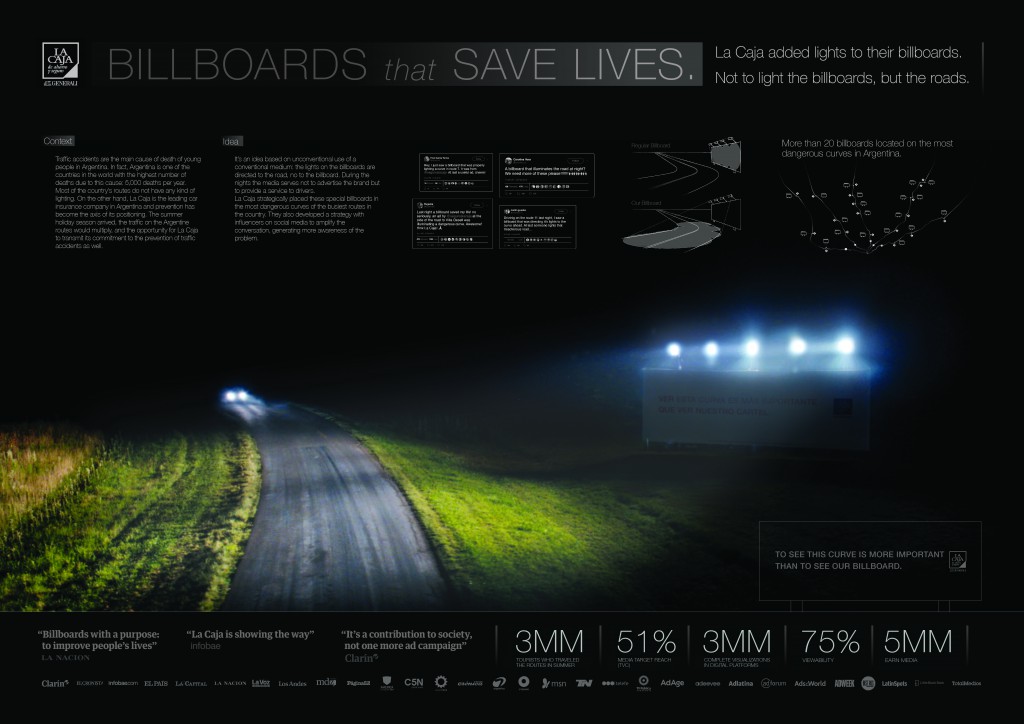 Shortlisted for: Best Use of Traditional Media (GOLD WINNER)

Argentina has more than 11,000 car accidents per year (among other things, due to poor maintenance of the roads, bad signage and little or no lighting). La Caja needed to contribute to road safety by focusing on the axis of prevention and raise awareness about the importance of responsible driving and the care of passengers. Summer is especially prone to road accidents as a large part of the population travels to the main beach resorts. A marked discredit in relation to the actions of the state is very installed in the Argentine society, this is the reason why the private companies have a fertile territory to position themselves as actors committed to the community and the welfare of the population. The action of the billboards provided an obvious improvement in the conditions of circulation of Argentine travellers and legitimised the place of La Caja as a brand involved in the problem of prevention.

The brand and its agency proposed a real improvement in the conditions of circulation of people traveling these routes. Altogether: marketing team, creative agency and Mindshare, in addition to the contribution of public institutes such as the National Road Safety Agency, it identified the routes and curves with high accident rates to create ad-hoc billboards there. Country road billboards usually don’t have artificial lighting so it hired special reflectors with solar panels (sustainable axis of the campaign) that activated automatically when natural light decreased. Instead of pointing lights to the message they pointed towards the trace illuminating the curve improving visibility in these dangerous stretches.

It worked on installing the conversation generating content in the main sites and news channels. In them, the social nature of the action was reinforced, showing the function of the billboards and leveraging referents from La Caja that developed the purpose of providing a real improvement in traffic conditions on routes. At the same time, different influencers specialised in transit joined the conversation through the hashtag #PreveníconLaCaja. (Prevent with La Caja). After this it launched with high pressures the AV commercial that narrates the action of La Caja. It had a strong presence in Paid TV, theatres and in the main video platforms online.