Latina Magazine founder Christy Haubegger said she was excited to be entering into what she felt was “the era of the Latina” at a discussion on empowering Latina women, with MediaLink president and chief operating officer Wenda Harris on the second day of Festival of Media LatAm 2015. 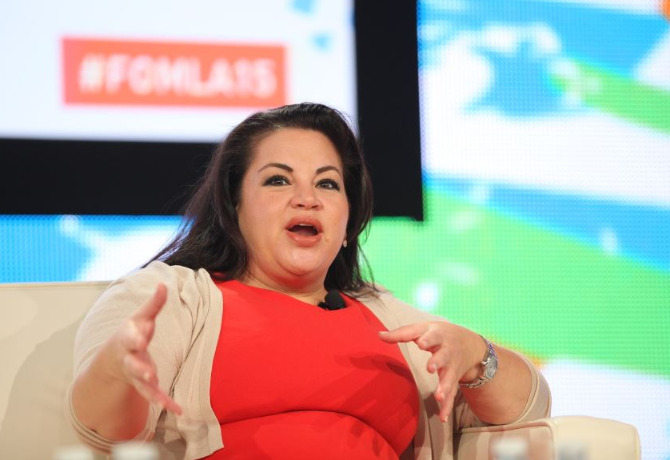 Haubegger commented that she started the magazine almost two decades ago because she was a big magazine reader.

“When I was growing up I didn’t see a lot of positive images of Latinas,” she said, despite there being over 26 million in the US. “Print was the new media for the Hispanic market.”

She went on to discuss that one challenger has been the limited innovation in Hispanic media, with only 2 mediums: “It’s kind of like America in the 70s.”

However, Haubegger felt that social media had allowed Latinas a place to tell their stories and see their lives reflected.

“We are hungry to see ourselves and to see our stories told,” she continued. While 18% of the US population is Hispanic, only 4% of speaking characters in movies fit this demographic, which she said leads to a big disconnect.

“Its early days still, and I think we are at a very early stage, but when we do see ourselves, we get very excited.”

Haubegger felt that the rise of stars like Sofia Vergara and Eva Longoria were helping with this portrayal, impacting global images of beauty.

“When Jennifer Anniston makes it, I’m not sure that blonde women are like ‘Oh gosh, I can do it too!’ as opposed to Sofia or Eva,” she said. “I think there is a relationship we end up having with our celebrities that is a bit distinct.”

“I think it’s a very good time to be who we are right now.”

Haubegger said that, although most of the population may never come to the US, they will see the media, which is why portrayal is important. She went on to discuss how differences in origin and generation are important to how Latinas connect.

“Most of the Hispanics in the United States were born here – that’s a huge shift,” she commented. “It won’t be programming from where we’re from but from where we are.”

Haubegger said she wanted to live “with one foot in each culture”. However, she said she still sees a lot of not super contemporary perception with women in the kitchen, like 1950s housewives.

She went on to say that marketers and brands need to spend more time really understanding the consumer.

Talking about social media, Haubegger joked: “What we’ve seen so far, it’s early days. I do think this internet thing is going to be really big though.

“Some who have been outsiders are insiders in social media as it has really given them a voice,” she added. “Power is not given, it’s taken, these women are seizing the power by creating the networks.”

“Technology is empowering these women in a new way.”

She commented that Latinas tend to prefer Instagram: “If you think what each of these channels is used for, I think actually Instagram, because it’s the phone and the picture and the ability to put the picture up immediately, it’s still worth 1,000 words.”

Commenting on the popularity of WhatsApp with Mexicans, she speculated that it was a case of texting being expensive when there is a monopoly on network providers.

Looking to the future, Haubegger felt that people didn’t realise how empowered Latinas are. “The big secret is that we are still a matriarchy,” she said.

“The stories that we tell matter, we have this entire generation of young Latinas who are going to be the most educated, informed and connected group. I think if we acknowledge, embrace and reflect them in our storytelling and marketing messages, we’re going to do some great work.

“I feel like this is about to be the era of the Latina and I am excited.”