The Economist’s Paul Rossi: ‘We are dealing with a consumer rebellion against advertising’ | M&M Global
Global News
20th May 2016 by Alex Brownsell

The ad tech “bubble” is set to burst, as advertisers begin to understand the limitations of ad tech, according to the boss of The Economist Group. 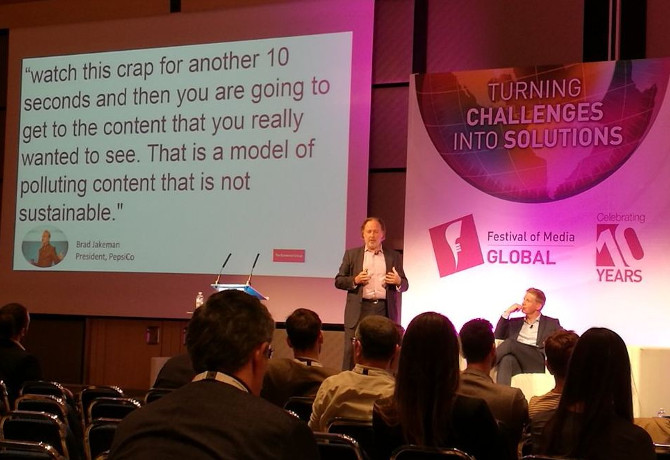 In a session focused on the publishing industry at the Festival of Media Global 2016 in Rome, Paul Rossi, president of The Economist Group, was joined by The Guardian global chief revenue officer Tim Gentry and Time Inc UK chief executive Marcus Rich.

Gentry made the case of trust and transparency in the industry, while Rich showed the progress that classic music magazine NME had made since becoming a freesheet last year.

Rossi, however, had a blunter message for those fixated upon the world of ad tech and digital advertising: “That side of the business is probably screwed.”

He told the audience that parts of the industry are in “denial” about the scale of the “existential issue” facing the digital ad sector, including fraud and ad blocking, with consumers “learning to skip your ads before they can walk”.

“This is now the year publishers are waking up to some stark, frightening facts. We are not really dealing with disruption from technology; we are dealing with a consumer rebellion against advertising, and the ecosystem we have created,” said Rossi.

“Digital advertising will not be enough to sustain publishing. The long term prospects are terrible. Look at ad fraud, viewability etc. The problems are structural; it is not coming back. This will be the year you see the ad tech bubble burst.”

He insisted that, with the first party data they possess, legacy publishers like The Economist have an advantage over big platforms like Google and Facebook: “We know our audiences better than a WPP algorithm or anyone next door.

“We have one product, and we’ve been chugging away at it for over 170 years. And a huge opportunity for us is to join the physical world with the digital world. We are putting physical products in mail boxes; Facebook is not.”