‘There is no bravery without fear’: Say Hello to fear with Michelle Poler | M&M Global
Global News
8th May 2017 by Anna Dobbie

The first morning of Festival of Media Global 2017 at the Rome Cavalieri opened with a bang with some enthusiastic dancing from serial fear-facer and co-founder of HelloFears.com Michelle Poler. 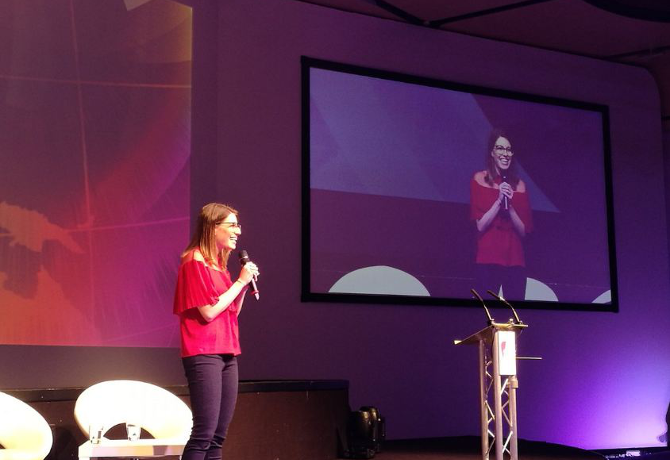 The dancing was aimed to challenge the audience’s comfort zones, the 28 year-old social media influencer explained, discussing her earliest fear as a child of walking down the aisle as a flower girl at a wedding.

“We all have a comfort zone and we know it pretty well – we live there, we know exactly where it starts and ends,” she comments before discussing how a university project resulted in her facing [and filming] 100 of her fears on 100 days. “Things that are uncomfortable to me may be things you can easily do.”

While facing fears like getting a Brazilian wax and holding a tarantula was uncomfortable, Poler said that uploading the footage to YouTube was a fear in itself due to the potentially negative response.

“Mean comments were the most helpful,” she added, resulting in her reading them out loud in a video. “They made me more determined to conquer my fears.”

“Cultural fears revolve around for need for love and belonging,” she explained, saying that 85% of the time, things don’t go as bad as people imagine. “What would you do if you were not afraid to disappoint others?”

Poler’s personal challenge is to “attempt to fail”: “The more uncomfortable we get, the greater the reward”.

Her social mission is to encourage people all over world to say hello to fear. “Doubt kills more dreams than fear ever will,” she concluded. “I used to see every fear as an obstacle, now I see them as an opportunity. There is no bravery without fear.”