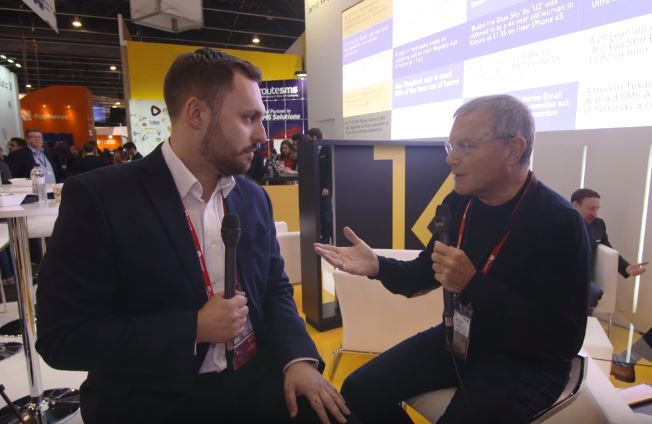 When you have witnessed as many trade and industry show as WPP chief executive Sir Martin Sorrell, the odd flash of déjà vu is to be expected. So, on a flying visit to Mobile World Congress 2016 (MWC) in Barcelona, he cannot help but smile when referencing reports of mobile operator consolidation in Western Europe and beyond.

With nearly 100,000 people shuffling from hall to hall at Barcelona’s Fira Gran Via in search of the latest must-have mobile innovation, and the advertising industry in a state of perpetual flux, the constancy of Sorrell’s advice has become highly-prized. Don’t believe us? Take it up with M&M Global’s readers, who last year voted him the most influential individual in international media and marketing.

With this in mind, it felt appropriate to quiz Sorrell on the indisputable top talking point at MWC: virtual reality (VR). Shiny new VR hardware could be found in every corner of the exhibition, from Samsung’s Gear 360 – unveiled by Facebook boss Mark Zuckerberg – to HTC’s Vive headset. The excitement of visiting delegates was palpable, but what is less certain is the extent to which this will disrupt marketing.

“The key issue is the software. But I think it’s really, really important, and I think the whole VR opportunity is colossal”

At last month’s Sundance Film Festival, Sorrell sampled a VR version of hit Hollywood movie ‘The Martian’, spending 20 minutes taking off in a rocket and riding a Mars rover. The experience was not without its drawbacks, and he developed a headache – “I get vertigo on deep-pile carpet, so I was pretty scared to look down and see I was caught in space!” – but he insists, with the right software, VR will have a major impact on media.

“We’re in the beginning of this. The hardware will develop, and it will get super-sophisticated. The key issue is the software. But I think it’s really, really important, and I think the whole VR opportunity is colossal,” he says.

Clients and media owners are not the only ones being impacted by the rise and rise of mobile; agency groups are also being forced to transform to remain relevant, as proven by the sheer number of media reviews called in 2015.

Sorrell says that although clients may not enjoy being described as “confused” – a claim made by rival Maurice Levy – they must certainly be guided through the complexity on display at Mobile World Congress.

His group, he argues, has succeeded in winning over clients with expertise and clout in the “Holy Trinity” of technology, data and content – something he believes has helped cause a $5bn “swing” towards WPP and away from Publicis Groupe, wounded by the loss of business from Procter & Gamble and Walmart.

“We are seeing significant changes which are driven by those three, the ‘Holy Trinity’. This conference really emphasises the importance of it,” says Sorrell.

“The big opportunity for us at WPP is to leverage our $80bn media buying power on behalf of our clients to make sure that they get not only the most effective and best creative work and planning, but also the most efficient with the best pricing, and I think we can do that.

“Mobile is a totally new world. It is a unique channel that changes not only the way you communicate with consumers, but the way they live their lives, how they buy things and their patterns of behaviour. I see this congress as a vindication, yet again, of our strategy,” he adds.

However, as media and technology companies gleefully trumpet the wonders of new mobile ad formats, Sorrell warns that a confrontation is brewing between those buying and selling advertising over the measurement of those campaigns.

The first shots have already been fired in the US, with the Association of National Advertisers (ANA) criticising the American Association of Advertising Agencies (4As) for releasing what it describes as “premature” media transparency guidelines.

“Google and Facebook are going to have to step up to the fact that our clients are not content with attributing a view for three seconds, with half the time the sound turned off.”

WPP has stepped up its investments in the measurement space, taking a stake in TV measurement firm Rentrak and last year investing $300m in ComScore. Sorrell claims that clients will invest in those who take a leading role in helping to measure the performance across both online and offline media – and warns big digital media owners that they must “step up” to meet advertisers’ demands.

“Our second-largest client Unilever, in the person of [chief marketing and communications officer] Keith Weed, has raised the issue of the ‘three Vs’ – value, viewability and validation,” he says.

“It all really resonates around the measurement issue. Some of our ‘frenemies’ are flexible and responsive to this, and some are not. This will move up the agenda. Google and Facebook are going to have to step up to the fact that our clients are not content with attributing a view for three seconds, with half the time the sound turned off.”