Travellers remain a key audience for international advertisers, but brands must use new methods to reach them. Alex Brownsell reports. 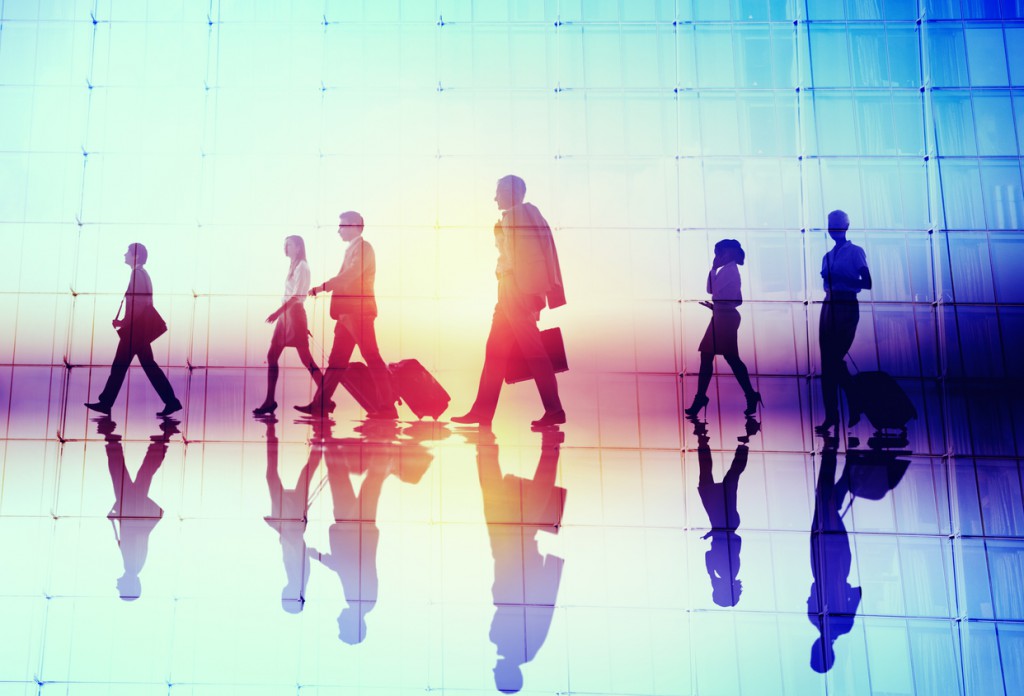 International travellers have long formed the bedrock of international media as we know it. It is a familiar audience segment: well-heeled businessmen clasping a copy of The Economist or Wall Street Journal in the airport terminal, and tuning into CNN in their hotel rooms. But this affluent and influential group is evolving, and so too must the advertisers hoping to affect purchase intent.

Two major trends have caused this transformation. Firstly, the cost of flying has significantly reduced over the past 20 years, meaning that business travellers are less likely to be chief executive or managing director-level, middle-aged white males. The other major shift, of course, is the proliferation of mobile devices. In short, travellers are a younger, more diverse and infinitely more connected bunch.

This has meant a rapid evolution in the methods used by advertisers to reach travellers. Take outdoor media, long a vital method by which to alleviate consumer despair in the departure lounge, and to encourage duty-free spending.

The digitisation of OOH inventory in airports such as London’s Heathrow – managed by JCDecaux – has allowed advertisers to use data to inform messaging. A plane-load of Chinese tourists can be served a Mandarin-language digital ad in the baggage reclaim area. Advertisers can update their creative at the push of a button depending on all manner of factors, from local traffic issues to weather conditions.

The banking and insurance companies most prevalent on airport poster sites before the financial crisis in 2008 have been replaced by mixture of luxury brands – Estée Lauder is Heathrow Airport’s biggest consumer advertiser – as well as technology firms like Microsoft. Some financial services are returning to the fore but, tellingly, you are now as likely to see ads for Bank of China as many Western institutions. 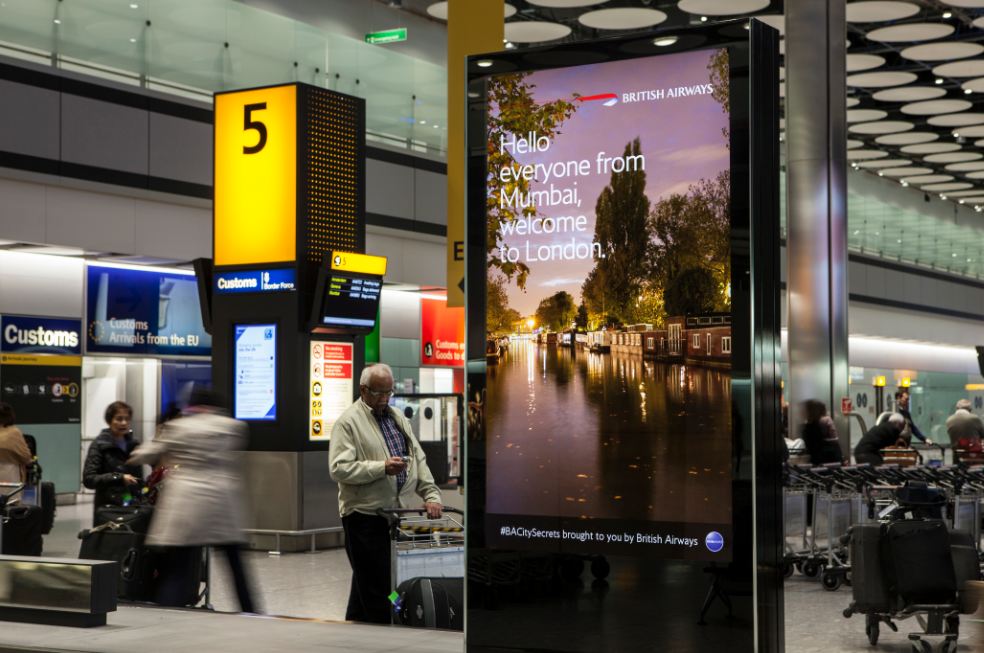 “If you were a big B2B brand, top of your list would be to find an illuminated, back-lit box in a key location, and to sit there for a year,” says Steve Cox, marketing director of JCDecaux Airports. “Increasingly, those brands are looking to embrace the digital opportunity. Not all are using data to drive their content yet, but they are certainly creating more engaging content.”

“People like to see ads in places they deem to be premium environment, such as premium ad spaces in airports”

All brand activity must be conducted in the knowledge that consumers are now glued to mobile devices, and less likely to be looking around in search of distractions. This gives an opportunity to reach travellers with more relevant content, says Tammy Smulders, global managing director at Havas Media Group’s luxury consultancy, Havas LuxHub.

“We know that people are constantly on their phones and devices, so that is an important way to reach people. Not only is it a place people are spending their time, but it also gives the advertiser the opportunity to really specify if they are talking to a man or woman, target by age, by spending patterns and travel patterns,” she says.

However, while Smulders agrees mobile should form an “important part” of any campaign to reach travellers, she favours a balanced media plan: “We would not recommend an exclusively mobile campaign – only in rare cases. We would still recommend an integrated campaign. People like to see [ads] in places they deem to be premium environment, [such as] premium ad spaces in airports.”

LinkedIn estimates that some 26 million of its global users fall into the category of ‘business travellers’, and travel on average eight times per year. The social network is encouraging brands to build communities on its platform, to ensure engagement continues between those trips. And it claims those individuals are far more responsive than the average consumer.

Sally Keane, head of agency sales and international at LinkedIn Marketing Solutions, says that business travellers engage in 173% more content-sharing and follow 93% more brands than non-travellers, meaning they are ripe for targeting by brands. Most of those – some 69% – are accessing LinkedIn on mobile, and are keenest for offers and professional advice: LinkedIn has partnered with Virgin America to offer expertise via the airline’s in-flight entertainment system.

One such brand to have pursued a more year-round content strategy is Emirates. Earlier this year, the Dubai-based firm became the first airline to pass 500,000 followers on LinkedIn; at the time of writing it was bearing down on the 650,000 mark, with subscribers enjoying its blend of offers and travel tips.

“People tend to fly two, three, four times a year – maybe more frequently on business. There is a lot of downtime between brand interactions. We look for ways to keep our brands top of mind during that period when people aren’t flying and experiencing our product,” says Chris Galanto, Emirates’ senior vice president advertising.

“It is very important that, as we try to build more a lifestyle brand, we give people opportunities to engage with us, and to entertain them and provide them with useful information that goes beyond just going to the airport and flying somewhere.”

Another brand investing heavily in its digital experience is hotel group Marriott. According to Elina Zois, director of CRM and loyalty, Europe, at Marriott International, services such a free Wi-Fi are now simply expected, and no longer able to boost perception with regular business travellers. Instead, the chain is focusing on a range of “value-add” and “surprise and delight” innovations.

Customers can check-in using Marriott’s mobile platform and pick up their room keys without joining the back of the queue. The firm is piloting a ‘personal concierge’ service in the US, allowing Marriott Rewards loyalty members to make special room requests to a dedicated “go-to person”, and partnering with the likes of Universal Music Group and the NFL to offer exclusive treats.

These loyalty techniques are also being boosted by a more rigorous approach to customer data, says Zois. “We play a lot with [personalisation] on our website, to make sure that the offers are relevant to the type of trip. Using our data and analysing behaviour models, we are continually tweaking that. If a customer goes to Paris every week, why don’t we do something [bespoke] for them?” she adds.

Fewer client segments are as reliant upon traveller business as the world of luxury. In the UK, 55% of all luxury goods are purchased by overseas visitors. This rises to 60% in France, compared to a meagre 20% in Germany. And, even if those travellers from China, Russia or the Middle East do not make a purchase, the visit may prove vital in shaping brand reputation and influencing future purchase intent.

To drive both footfall and brand perception, luxury advertisers are embracing a more data-driven creative approach, says Havas LuxHub’s Smulders: “We know where people originate from, based on the networks on their phones and lots of other third-party data. We can serve a traveller a mobile ad on arrival at the airport, when they are in their five-star hotel, when they are in a key shopping district.”

Context and location are not the only option, she adds. The creative itself should also be tailored depending on the target consumer. With a fashion brand, a Chinese model could be swapped in to appeal to visitors from the Far East. In the case of jewellery, the choice of stone can be changed to account for differing tastes in, say, the Middle East.

So is the future of advertising to travellers an increasingly one-to-one pursuit?

Marriott’s M Live social command centre aims to develop deeper relationships with individual consumers, which in turn may add depth and texture to communication with guests during their stay at its hotel. Zois acknowledges there “will come a day” when its ‘chat’ service – currently being tested as a replacement for old-fashioned hotel room telephones – will incorporate artificial intelligent ‘bot’ technology.

And there can scarcely be many environments more appropriate to the ‘Minority Report’ vision of ultra-personalised OOH advertising than airport departure lounges: advertisers know precisely who is in the airport, where they are going and, given the granularity of mobile data, precisely where they are sitting. Yet Cox remains sceptical such techniques will be introduced at Heathrow any time soon.

“There is a school of thought that says it is increasingly becoming possible to connect a digital screen with a personal device in such a way that you can deliver them a personal message. But why would you want to do that? You will tend to see advertising as seen by a significant number of people. We don’t place our product where individuals will see it one at a time. What we’re looking at is mass personalisation,” he says.

However, even if the poster in the departure lounge is not delivering an unerringly personal brand communication, Cox agrees that beacon-style technology may allow advertisers to use OOH inventory to serve customisable content on travellers’ own devices.

Travellers are on the move, and so too are the advertisers trying to gain their attention. It is surely only a matter of time before greater personalisation takes off in a significant way.