Zenith’s European vice president and head of innovation Tom Goodwin discussed how the assumptions about technology and life are constantly being challenged in his session at NewsCred’s ThinkContent Summit in London. 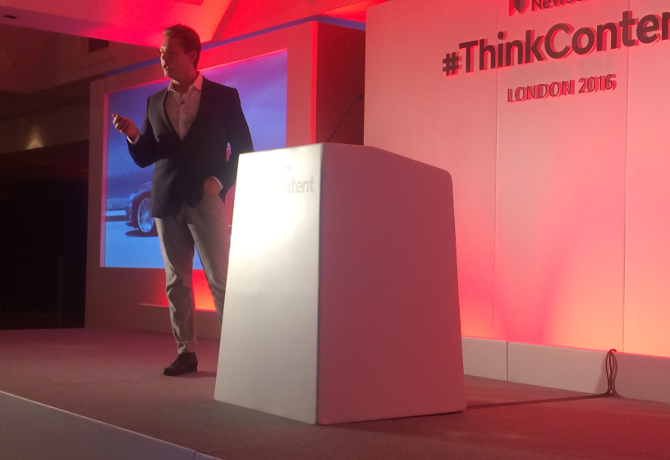 Goodwin said that, while he felt the world was changing faster than ever and in a more erratic way, marketers believe they have changed more than they have, reusing TV adverts on the internet and believing they have progressed.

Discussing the context of change, Goodwin said there were six trends to frame a new way of thinking about advertising in the post-digital age.

Firstly, Goodwin said that “digital disappears”, explaining that most business parlance is rooted in quite old fashioned behaviour and for many, digital is assumed, therefore need not be referenced.

Secondly, he discussed infinite screens and the evolution of the term TV, which previously referred only to a device, but is now used as a sign of quality, length or how you access content.

“We used to have clear verticals,” he added. “Increasingly we don’t have these vertical lines so the distinction of different media channels is becoming less useful.”

Another trend focused on more intimate screens and data, with Goodwin demonstrating the evolution from the large cinema screen viewed by lots of people each with little control to the most personal screen, the mobile phone.

“We talk a lot about big data, we need to think more about personal, intimate data,” he added, speculating the augmented and virtual reality was the next step.

With “new realities” the fourth trend, Goodwin said that he does not enjoy talking about technology too much, instead focusing on the implications, with the possibility of the whole world becoming an opportunity for advertisers.

Fifth, the world is becoming more mediated than ever, mostly due to mobile phones, to which Goodwin said people “do not need extra stuff in their lives”.

This is where Goodwin said the opportunity for content marketing really comes in, through making the most of post-digital, blurred lines, new behaviours, client problems and new thinking.

“We have to stop feeling like we’re tricking people and think we’re giving people what they really, really want,” he added, encouraging marketers to forget the assumptions of the past and not reduce around limitations, but work only around the newly or not yet possible, blurring lines, getting mobile right and making lives easier instead of asking for more.

“I genuinely believe if you put all that together we’ve got the best canvas ever for advertising.”