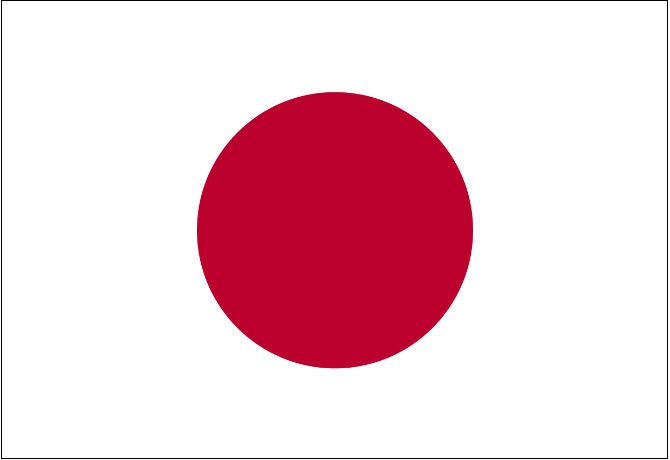 With the fourth largest economy in the world by PPP, Japan is a key market for many international brands. Japan is also a mature market in terms of online culture and this is reflected in search. The familiar names of Google and Yahoo! can fool digital marketers into an assumption they know the lay of the land, in what is actually a very distinct digital landscape.

With decades of established trade and one of the largest global economies, Japan has long been an attractive market for foreign advertisers. Japan boasts the second highest GDP in the APAC region, trailing only China.

Japanese consumers are also accustomed to spending online. In 2014, ¥1.282tr (around $1.12bn) was spent on clothing and apparel alone, making it the category that accounted for the highest amount of retail ecommerce sales according to Japan’s Ministry of Economy, Trade and Industry.

In comparison to its APAC neighbours, Japan is the only market that makes use of global search engines and social platforms in significant numbers. In terms of user numbers, Yahoo! Japan (‘Y!J’)  is the most popular search tool in Japan. 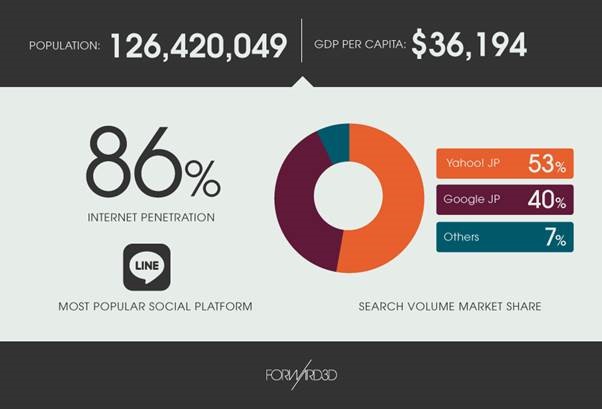 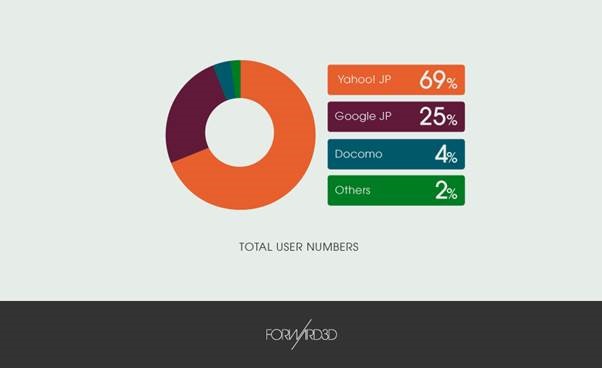 The distinction between search volumes and user numbers is an important consideration when looking at the popularity of search services due to the different use cases between portals and true search engines.

In contrast to Google’s minimalist search page, Y!J is a ‘portal’, used daily as a source to get up-to-date market information with a variety of services including news, blogs, weather forecasts, shopping and finance. Many users may make use of all of these services for example, without ever actually making a ‘search’.

It can be confusing for Western marketers to learn that Yahoo! Japan is a completely separate franchise from Yahoo! and even differs from other Yahoo! franchises in the same region such as Yahoo! Hong Kong. Yahoo! Japan is a search engine that caters for Japanese search preferences, with its own set of ad products.

Despite the density of Y!J’s SERP (Search Engine Results Page), it does share some similarities to Google’s. Paid search ads remain at the top but there are not as many opportunities for customisation compared to Google. Ad extensions are less numerous for example, with only sitelinks (or Quicklinks) and call extensions available compared to Google’s social media links, callouts and other options. 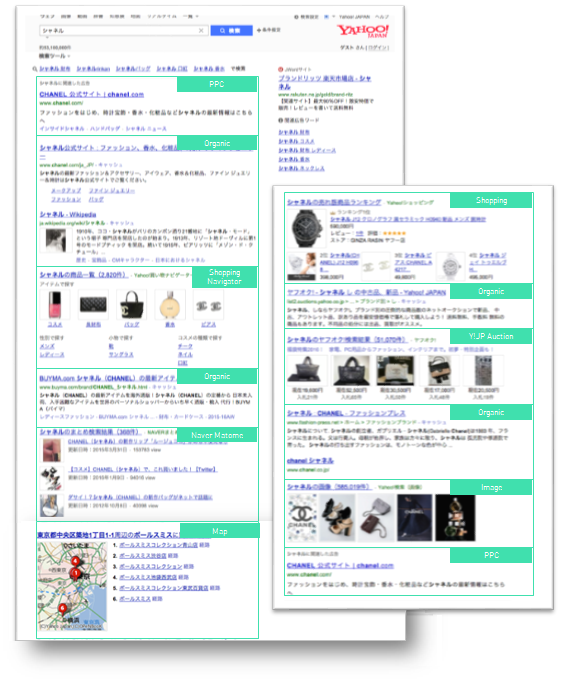 As a generalisation, Google is seen as the more international of the search engines, while Y!J is more local in perception. Users of Y!J’s specific products and services often prefer the search engine’s portal functionality and consider it a trusted source for a lot of the information it hosts such as the weather forecast.

From personal experience using both search engines for our clients’ campaigns, Google typically shows stronger search volume and CTR, and also tends to drive more revenue. However, Y!J is much cheaper in terms of CPCs and also benefits from better conversion rates.

An important difference lies in the messaging possible in paid search. Instead of the 35 character limit established by Google, Y!J has to date offered a greater number thanks to the fact double-byte characters take up only a single space instead of two, meaning that advertisers are free to include more details in PPC ads.

“As a generalisation, Google is seen as the more international of the search engines, while Y!J is more local in perception”

Despite the cheaper CPCs, Y!J can be more challenging in other ways such as the competition for ad space being stronger. Owing to looser regulation than Google, ad results can sometimes be misleading, with affiliate sites appearing alongside brand names. This is why an excellent knowledge of the search engine is required. To counteract this, we’ve implemented careful checks and used our proprietary API technology to set up alerts to notify our account teams of significant changes.

Another unique feature of Y!J is its unique Premium Search Display option. Brands are able to run display ads directly at the top of the search results page, ensuring maximum visibility.  However, these ads can only be run during promotional periods, for a maximum of five keywords, and if the monthly search volume reaches 100,000 for the brand’s keywords. 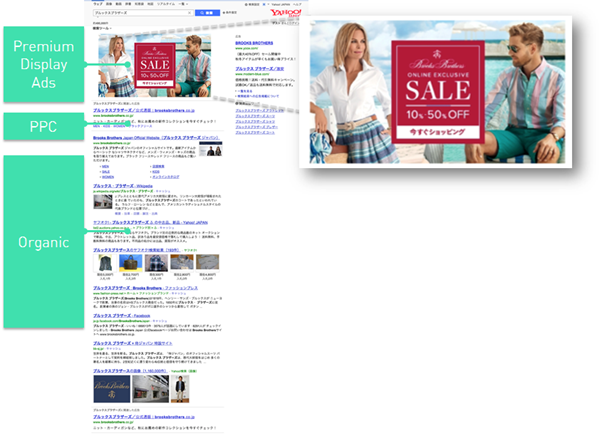 Y!J Display Network is very similar to Google’s. It offers a range of functions across mobile and most notably, the placement of ads on third party websites (such as Bing or Naver) in addition to placement within the portal. 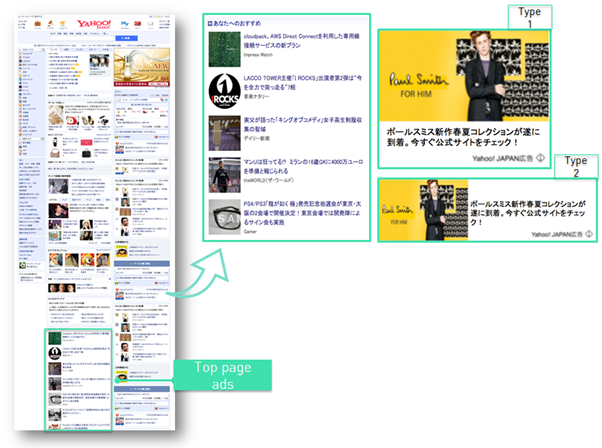 In Y!J, display ads are shown on the portal homepage and this is also the case on its mobile version. With huge traffic visiting the homepage, this enables advertisers to push brand awareness straight from the landing page and reach new users.

Naver Matome: Y!J’s organic SERP also includes a section populated by Naver Matome, a popular news curation/social site. These results are triggered by relevance to search queries and feature articles written by users that are listed based on the number of views and degree of relevance. This partnership came about due to Naver Matome’s popularity among users: each month the platform has an average of 75 million unique visitors and hosts over three billion page views.

Naver Matome is a great way of building brand awareness. Brands can either use the Sponsored or Premium features and curate their own content, or choose to collaborate with popular and respected users/influencers for content creation. 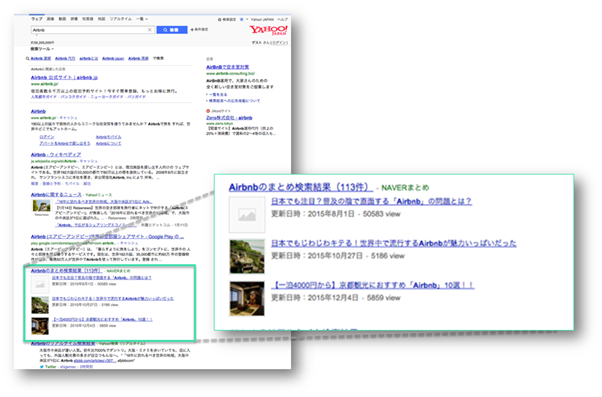 LINE: With over 58 million users in Japan (45.7% of the total population) LINE is Japan’s strongest social media channel, as well as its number one mobile instant communication app.

In terms of Western equivalents, LINE interestingly compares to both Instagram and Whatsapp. Users can both post messages to their ‘Friends’ and also post updates in the form of text or image statuses. Similarly, brands can create Corporate Accounts and interact the same way with their ‘Friends’.

As documented by eMarketer in early 2016, it’s shown to be a strong consumer touch point for brands considering that “nearly 80% of female Line users followed at least one official account in November 2015” and among those, half reported having redeemed coupons received via official accounts on LINE, demonstrating the power of the platform when it comes to advertising and engaging with consumers.

Although often thought of as a very similar online landscape to the West, when it comes to search the Japanese market is more locally facing than the familiar names of Yahoo! and Google might imply.

Be it in paid search, display or social channels, it benefits from its own set of local platforms. Japan’s strong economic development and consumer purchasing power has made it a key market for brands when it comes to international expansion, with the potential for large scale success, but also requiring a deep knowledge of the market and its unique features.