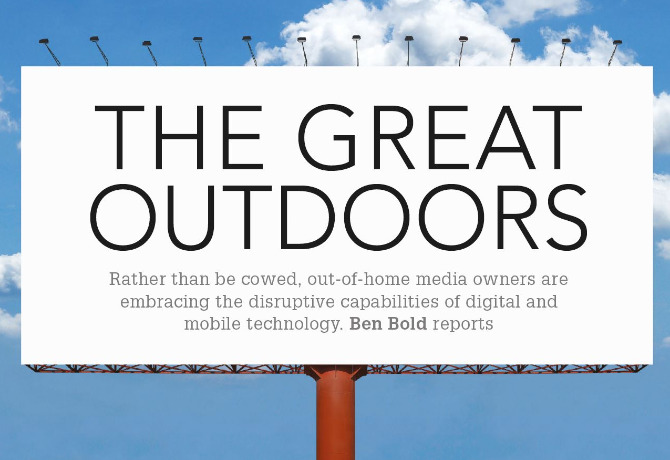 Wi-Fi-enabled park benches; poster sites that use traffic and weather information to tailor and drive home their messages; NFC technology that augments the billboard, allowing it to effectively become a point-of-purchase mechanism – the humble poster has come a long way in recent years.

“Outdoor is the oldest medium of all,” says William Eccleshare (below), chairman and chief executive of OOH media owner Clear Channel International. “There’s still huge power in the public message – the power of the public comment. It’s a big thing – it’s why people get married in front of an audience of 150; it gives a public sense of commitment.”

For Peter Markey, chief marketing officer at UK postal company Post Office, it’s a no-brainer that the power of outdoor is worth tapping into. “Outdoor has been quite a big part of our activity,” he says. “We did a campaign in 2014 that led on digital out-of-home. The message was that ‘we’re changing’. It worked really well; we did large poster sites.”

So much so that Markey employed OOH across London for a Post Office Money drive, led with a TV campaign starring British comedian Robert Webb.

“It was based on the realisation that people are time-poor and persuading them to apply for a credit card,” Markey says. “The inference was that they could use that time to engage with Post Office Money, during moments when you have time to look and digest. We found that very powerful.” 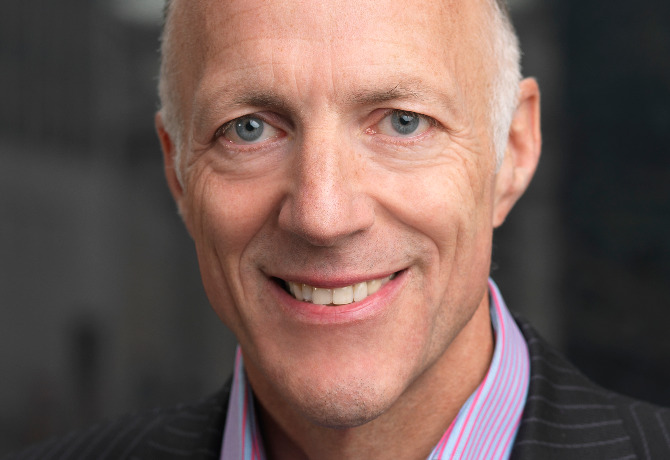 It would be remiss when discussing the oldest advertising medium to not mention the newest – digital. But whereas other media have suffered as marketers have been beguiled by digital, out-of-home has proved resilient.

“If you look at the facts, OOH is the only traditional medium to have grown in the past five years,” says Eccleshare. “Globally, press has collapsed, TV is static and radio has declined. Outdoor though has been growing steadily, and part of that is because it’s the last true broadcast medium. You can’t fast-forward billboard or fragment our audience like TV audiences have fragmented. It’s a time when people want to be interrupted – they’re waiting for a bus or a train. It’s not interruptive like TV advertising.”

“Globally, press has collapsed, TV is static and radio has declined. Outdoor though has been growing steadily”

By its very nature, out-of-home’s remoteness from the consumer living room, from the office, and from the home computer, has made it a natural bedfellow of mobile marketing.

“The beauty of OOH is that it can double as a TV screen, a social feed, a camera, a vending machine, a download site, or a purchase point,” says Phil Rowley, global innovation director of PHD’s Global Strategy Unit.

“And crucially, the smartphone is the easiest route into these digital OOH (DOOH) interactions – it allows users to continue the brand experience away from the site and enables later retargeting and re-marketing.”

There are myriad examples that demonstrate the integration of OOH with digital. Rowley cites Oreo’s Eclipse campaign, for which multiple outdoor sites showed a real-time image of an Oreo slowly eclipsing in sync with the actual astronomical event itself.

Meanwhile, Eccleshare is particularly laudatory about Apple activity. “My favourite campaign of the last year is the Apple Global Gallery campaign (below),” he says. “Because it used the core values of outdoor and really powerful imagery, with consumers providing their own pictures via social media.” 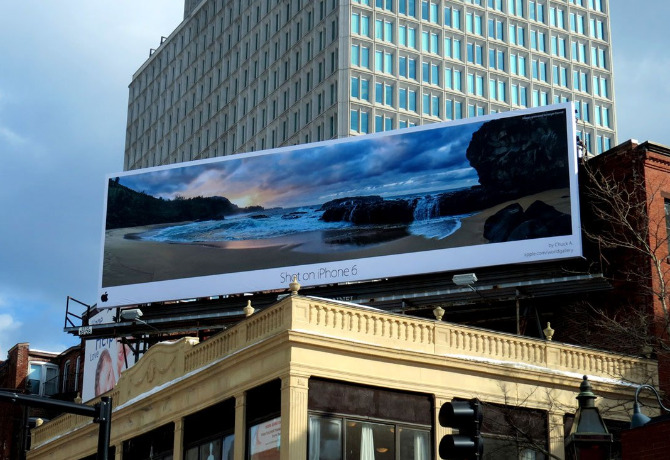 Mobile devices are not limited to enabling consumers to engage with campaigns. They are also becoming more effective at gleaning useful information about customers.

“A big trend is the ability to use mobile devices to track consumers using GPS, which enables us to have far greater quality of data on a consumer journey,” says Eccleshare. “We can track a journey through to the retail experience, to what consumers purchase, and are able to demonstrate more accurately the impact of our medium.”

While it’s easy to wax lyrical about the possibilities of marrying OOH with digital, there are some technologies that don’t excite all marketers, despite their common currency.

“We fiddled around with QR codes but found it hard work,” says Markey. “Whereas if you make it easy for the consumer and reward them, why would they not [interact or engage] with the ad?”

Outdoor media owners are understandably expanding their inventory into international markets. Clear Channel, for instance, is in the midst of trialling beacons in Australia, while developing and emerging (D&E) markets are becoming ripe for investment.

“Asia and more specifically China are still ploughing budget into DOOH,” says Rowley. “As the price of digital outdoor technology decreases and ubiquity increases, we’ll see DOOH become an increasingly dominant medium in developing and emerging economies – not only because it will be easier to centrally deploy and regulate content in remote and previously media-dark areas, but also because as smartphone penetration increases in D&E markets, advertisers will see DOOH as the natural partner of mobile.”

With much of the global spread of marketing having been driven by the audience reach offered up by the search giants, technology companies and OOH players will forge stronger links with one another.

Rowley envisages more OOH being useful to people, using data collated by the likes of Google. “We’re already seeing ads for Heathrow Express accompany traffic reports, comparing travel times of road versus rail,” he says. “Google has also been working in this area for some time with their initiative Google Outside, an attempt to bring the utility of the internet into public spaces.”

The degree of eagerness with which marketers are observing OOH tech developments perhaps supersedes that for other media. Accordingly, an area of development that excites media owners, clients and agencies is the ability to attribute sales directly to advertising activity.

This explains Markey’s enthusiasm for the potential of “personalisation around experience”, “linkage to other channels, particularly social”, “ecommerce where you’ve got purchase intent” and making advertising “more responsive – linking other channels to the physical product”.

NFC will be playing a leading role in the rise of this trend. “With the rise of contactless systems like Apple Pay, I think we’ll see NFC make a mini resurgence, as the ‘phone tap’ becomes second nature,” says Rowley.

“Digital can have huge numbers, but the truth is that it doesn’t deliver real emotional engagement”

“As we move into the future, we’ll see digital outdoor become a more integral part of the ‘Connected City’. I think within the next three to five years, we’ll see outdoor sites become more artificially intelligent – connected, sentient and much more aware of their surroundings.”

This means that brand messages could become increasingly based on factors such as traffic conditions, the weather, news headlines and even the profile and behaviour of consumers, allowing for dynamic creative suited to the prospective customer.

“This exists now, but the technique is metaphorically wearing a nappy,” Rowley adds. “We’re about to see it in the full flush of youth.”

For Eccleshare, digital as a standalone medium has “reached a peak”. “Look at the combination of ad blocking and spurious numbers – automated clicking to boost numbers,” he adds.

“I think clients are getting wise to the fact that digital is not delivering value for them. It can have huge numbers, but the truth is that it doesn’t deliver real emotional engagement, which is why we’re seeing a swing back to media such as ours.”